What’s Behind Amazon’s Push to be Everything 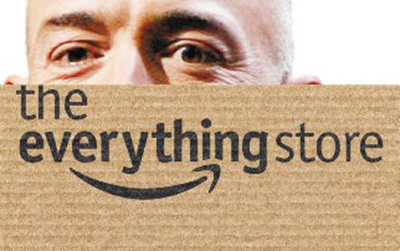 Jeff Bezos had initially wanted to call his company Relentless.com. He registered the domain name (along with a few others, like Cadabra.com) before ultimately settling on Amazon, after the world’s largest river. But it’s hard to find a better descriptor than “relentless” when it comes to Bezos, whose unchecked vision, drive and ambition is behind the $61 billion juggernaut that has changed the world of commerce.

In “The Everything Store,” journalist Brad Stone tells the Amazon story with meticulous nuance and reportage. It’s a fast-moving, gripping narrative rife with insights into the man, his company and entrepreneurial drive. To this day, if you type relentless.com into your browser, you will be directed to the Amazon homepage.

Digiday recently spoke with Stone about what companies can learn from Bezos and what the future holds for Amazon. Excerpts:

Bezos told you it was “too early” to write the Amazon story. What does that suggest to you about where the company is going?
It’s a reflexive response to authors seeking deeper access into a company that is characteristically secretive. They don’t want to divulge much – it’s a strategic weapon. And they’re also racing ahead and firing on all cylinders and expanding in all different ways.

So down the line, can we expect an Amazon phone? A set-top box? An Amazon 3-D printer?
Yes to all of the above. They want to do everything. The vision is that ambitious. They’re going toe-to-toe with Apple, Samsung and the other big hardware companies.

Talk about the previously unpublished “love” memo Bezos sent to his senior staff about tailoring the public perception of the company.
Every big retailer over the last 100 years had to deal with a version of the same problem: Once you get really big, you start displacing smaller and more sympathetic companies. From the A&P grocery chain to Sears and Walmart, being big in retail has drawn a lot of negative scrutiny. In that memo, Jeff is thinking about what is the formula of perception of big companies. How do you tilt the field so you’re admired more than you’re feared. What struck me was that he cared in the first place. He often doesn’t own up to that. He often says Amazon has a willingness to be misunderstood. But he put a lot of thought into the public perception of the company.

And yet he can be such a demanding and even unpleasant boss as you portray him.
Like so many other visionary high tech CEOs, he’s demanding and he expects a level of excellence from everyone around him. If they don’t meet his high standards, he can be tough. By and large, the majority of Amazon employees I’ve talked to have tremendous loyalty to the company and to Bezos. Even though working at Amazon wasn’t the happiest time of their lives, they often felt it was the most productive. They were part of something that was changing the world.

Given what you’ve learned in reporting this, what advice would you give a startup today?
Always keep inventing. Keep looking for the next new thing. In the Internet age, the bar is always getting higher. Amazon could have died a number of times — in the late ’90s and again during the dot-com bust and again when Google was created and again when Apple got into digital media. Bezos refused to stand still. He expanded categories, brought in third-party sellers and got into devices with the Kindle. The second thing is, figure out what you do better than anyone else. That’s the biggest lesson with competing with Amazon.

Who does Amazon need to be afraid of?
Generally, it’s Apple or Google. A big part of Amazon’s business is still in media categories that are transitioning into digital. Google and Apple have great catalogs and experience and are building devices. In this category Amazon is an underdog.

Any advice for retailers in particular struggling to go digital?
Amazon is a testament to the incredible complexities of commerce: for every 10 million customers, your distribution process gets exponentially more complex. Amazon’s story is the story of facing that complexity and responding to it, not listening to the skeptics and solving the complexity and chaos in your own business.

How does Amazon avoid falling on the wrong side of antitrust laws?
Amazon is an e-commerce platform, and it is the largest seller on that platform. That’s always an uncomfortable position and tends to draw extra scrutiny in the way Microsoft did in the ’90s. I think anti-trust enforcement agencies have a tough time keeping up with digital business. The big warning sign that always attracts their attention is the perception that prices are going up. If Amazon makes acquisitions that make a serious competitor vanish, drives prices up in a category, they’re going to get extra scrutiny. That’s already happening in countries in Europe, like Germany, where they are more aggressive.

What does Bezos himself buy on Amazon?
[Laughs.] He buys everything in his continuing effort to audit the company and ensure its systems are running smoothly.

He cautioned you to be careful of the “narrative fallacy.” Do you think you succeeded?
[Laughs.] I don’t know that there’s any getting around it. The best you can do is talk to as many people as you can and weave a narrative from their cumulative recollections. The only alternative is not telling the Amazon story. The company has changed so much about the world; it kind of demands attention.