‘The willingness to grind it out’: 360i’s Bryan Wiener on making it 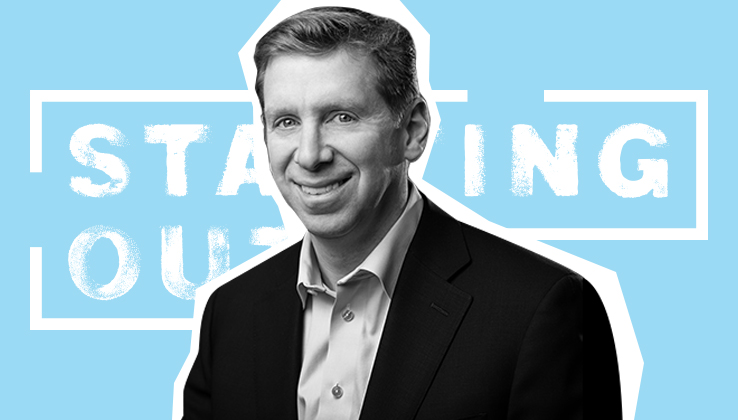 360i Chairman Bryan Wiener has a pretty simple formula for success: old-fashioned hard work. Wiener, who has had a long career in the ad business and watched the digital ad industry quite literally grow up, joined this week’s Starting Out to talk about his first job, his “shitty mentors” and what it’s like to put everything on the line for a company you love.

It was 1992. I was graduating from Syracuse. It was a recession. And my father, who was a corporate lawyer, told me — and he hated his job — “follow something you love.” And the only thing I could think of was sports. Because I loved playing sports. So I thought, why not do sports marketing? So I got this book, and I applied to 32 sports marketing firms that were in New York. And every single one of them sent me a letter, and it said, “Thank you for your interest. Your qualifications are really impressive, but we don’t have anything for you.” That only pissed me off more. Because my qualifications, I didn’t have any. So I knew they were full of it. I took each one as it came, and I put it up on a wall as motivation. And each day I’d look at them and say, “You have to do something today.”

My sister, who was in Newport [Rhode Island], some guy was hitting on her who worked at a sports marketing company. Being the good sister she was, she maneuvered that into, “Can you help my brother get an interview?” He said yes, and two weeks later, I showed up at that office and asked for him. Turns out, he’d gotten fired that day. So I kinda sat in the lobby. And someone felt sorry for me. So the vp of marketing sat down with me and said, “Sorry, we don’t have any job opportunities.”

And I had looked around as we were going around [the office] and saw tons of young people. And I asked, “Who are all these young people?” And she says, “interns.” And I said, “Great! I’ll intern.” And she said it’s for people still in college. I said, “No problem, I’ll take it.” She said, “We pay $5.25 an hour.” And I said, “Great.” And I took it. And then I showed up, and it was the first time I’d gotten any sort of pay, albeit not much. And they put me on the Kool-Aid account. Our job for Kool-Aid was to increase sampling. And we hired basketball players, and we’d go into gyms. And the NBA player would do a clinic, and Kool-Aid guy would take pictures. Someone had to dress up in the inflatable Kool-Aid suit. And I was the low guy on the totem pole.

There’s a big difference between wanting to be successful and being willing to do whatever it takes to be successful. The willingness to grind it out is something missing with a lot of people. Even in business school, all my classmates were going to Wall Street or consulting or packaged goods. I had to grind it out and get internships. There were no people looking for internet people. You had to grind your way through to get to the right place in the right time. When I think about everything after that, there has been far more failure than success. So that’s been key.

You have to just tune out what other people are doing. If you worry about what other people are doing, it’s easy to get distracted. Focus is critical. Whether as an individual or a company, even before you decide what you’re doing, you have to decide what you’re not doing. It’s kind of how my brain works: Where do I want to go? And then work backward from there. Anything that doesn’t fit in that, don’t do. It’s not rocket science. It’s reverse-engineering success. You can do that by studying other people. People ask me who my mentors are. One of the things that’s influenced me most in my career is that I had shitty mentors. What I did was I learned how not to lead a company by watching these people.