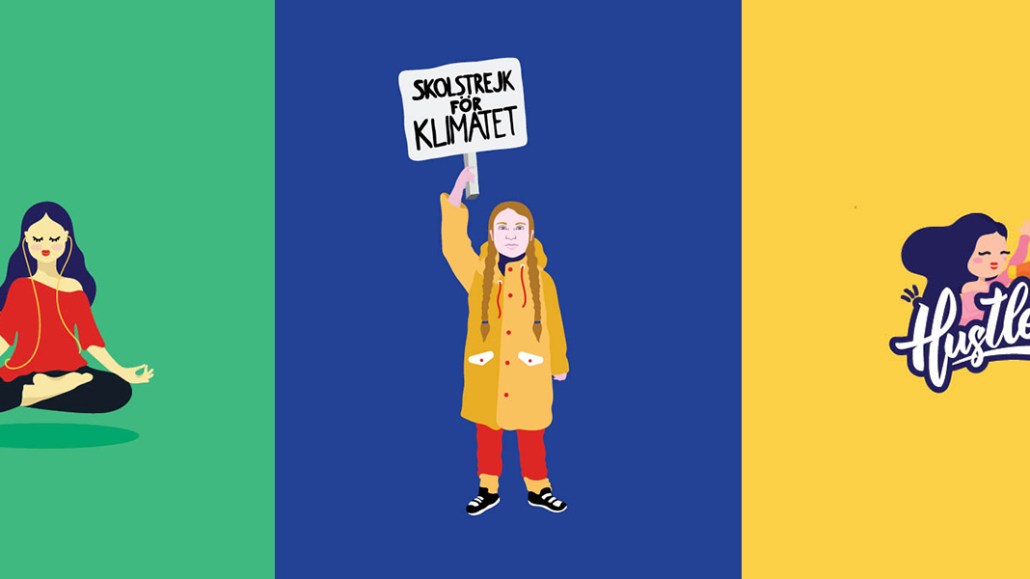 Now that members of Generation Z are entering the workforce and beginning to flex their purchasing power, marketers want to better understand these individuals who were born from 1995 to 2012. Seven Gen Z marketers and entrepreneurs share their insights from the frontlines.

Climate anxiety
The cold, hard truth about climate change and its impact has not been lost on many Gen Z’ers and it’s influencing the brands they support and the items they buy.

“We feel like we have the world on our shoulders as far as issues like climate change go,” says Andy McCune, cofounder of Unfold. “Other generations have neglected this and passed this onto us. When we make purchasing decisions, sustainability is very important to us,” adds McCune, whose mobile design tool kit firm was recently acquired by Squarespace.

Companies that are pursuing sustainability need to market themselves appropriately, says Tiffany Zhong, CEO of Zebra IQ. “Anyone can make a brand today and drop-ship something. But Gen Z will go with the most sustainable and efficient brand that’s most aligned with their own brand,” notes Zhong, whose company offers a real-time Gen Z insights platform.

For Gen Z’ers, the idea of sustainability isn’t just limited to eco-consciousness; it extends to a more general longing for things that endure, according to Drake Austin Rehfeld. “Gen Z cares about purchasing things that last and that matter and have a story behind them that they can relate to as well. It’s thinking through the mindset of what this means for a lasting planet and… for a lasting collection of my own,” says Rehfeld. He serves as director of product for Ntwrk, which has an app that livestreams shopping opportunities.

“Having information be readily available and be able to consume it at all times makes Gen Z very savvy with what things are happening, and knowing and forming judgments about something,” says Ishan Goel, founder of marketing agency Goel Strategies. “Nothing slips by. They always keep their fingers on the pulse.”

McCune explains, “We’re consuming so much information all day constantly at a rate that humans have never really consumed information before.” He observes, “We have so many people who are trying to reach us every minute of every day,” citing as result a need to capture Gen Z’ers’ attention in less than eight seconds.

“We can determine within a few seconds if something is worth our time,” she says. “Our biggest turnoffs are things that are fake, inauthentic, corny or trying too hard.”

Renfeld links his generation’s desire to filter out what’s phony to its openness to cancel culture: Gen Z is quick to pass judgments because “we understand the opportunity cost of media,” he says. In other words, don’t waste their time and don’t try to deceive them, he adds.

The Amazon Prime (Now) generation
Gen Z’ers have been growing up in an online world of such wide-ranging e-commerce opportunities, they are accustomed to receiving instant gratification in ways not experienced by preceding generations.

“We’re like the Amazon Prime now generation,” McCune says. “We’re used to overnight shipping for free; we’re used to live chat for customer support. We’re used to getting things now; when we buy something, we want it tomorrow, if not today.”

Companies would be smart to cater to Gen Z’s desire for immediacy and instant gratification, McCune says.

On the flip side, though, companies that know how to play the long game can benefit, too, Goel suggests. Businesses can find opportunity by figuring out a way to surprise or delight Gen Z, even by using an older form of communication such as direct mail, he adds.

“Mailing a letter to a Gen Z’er makes a brand stand out,” Goel says. “They’re not getting letters. It’s a territory that’s not being touched at all. Too many brands are too busy trying to play games on the same playground: the internet.”

Platform fluency
Marketers need to do more than merely meet Gen Z’ers on the social platforms they use every day. To really reach them, companies need to learn how to speak the language of each platform and personalize the messaging, say Gen Z marketing experts.

“The personalization standard is so low” these days, says Gen Z marketing consultant Connor Blakley. “Brands are so bad at talking to Gen Z in the first place.” Yet “youth culture dictates a lot of things, including using the cultural references that we use. They need to talk to us on the same wavelength.”

To Bregman, every platform has its purpose: Facebook is a platform used by older audiences and posts there are “not as relevant” to Gen Z. Although many of her peers have at one point deleted their Facebook accounts or might not have initially had one, they are deciding to reactivate or sign up for accounts upon entering college, she says. Gen Z’s use of Snapchat “is starting to fade” but still lingers, she adds. Companies that are serious about their desire to communicate with Gen Z’ers should be using Instagram and TikTok, she maintains.

TikTok is especially relevant to Gen Z because it’s quick to use and the platform invites Gen Z’ers to pursue their desires to be entrepreneurs or influencers, Bergman says. “It’s easier to build a following on a platform like TikTok than on YouTube,” she claims.

Respect for the hustle
And the entrepreneurial spirit that can be found among many Gen Z’ers is informing their desire to become influencers and creators.

“Companies should really start thinking about the fact that people who might have 2,000 followers are influencers themselves in their own right who are strongly influencing their own communities,” Zhong says. A company working with one of these micro-influencers “might be more powerful than working with the influencer who has the most followers on Instagram,” she adds.

The more specialized the content, the more Gen Z’ers will appreciate it in some cases, Blakley says. “For every subject and niche, there’s a subject master for it and people will start producing content at scale in those niches,” he notes. “The line between influencer and celebrity is extremely blurred.”

Gen Z employees want flexibility and they want to work for organizations that value them and that they can trust, Rehfeld claims. “To hire Gen Z, it’s not about having a pingpong table and kombucha on tap,” he says. “It comes down to trust and authenticity, and that plays into the entire ecosystem of a Gen Z’er’s life: [providing] enough rope where they can make impact and enough guardrails where they don’t fall over edge but can still move forward.”

For Gen Z’ers who are entering the workplace, it’s crucial that employers provide an environment that welcomes entrepreneurship, says Swish Goswami, CEO of Trufan. “Our generation is the generation right now that’s most at risk when it comes to mental health,” says Goswami, citing the deleterious effects of social media. “Personalized care for employees or weekly check-ins where you make your employees feel like they’re part of a bigger ecosystem and having open-door policies will be extremely crucial to people in my generation.”