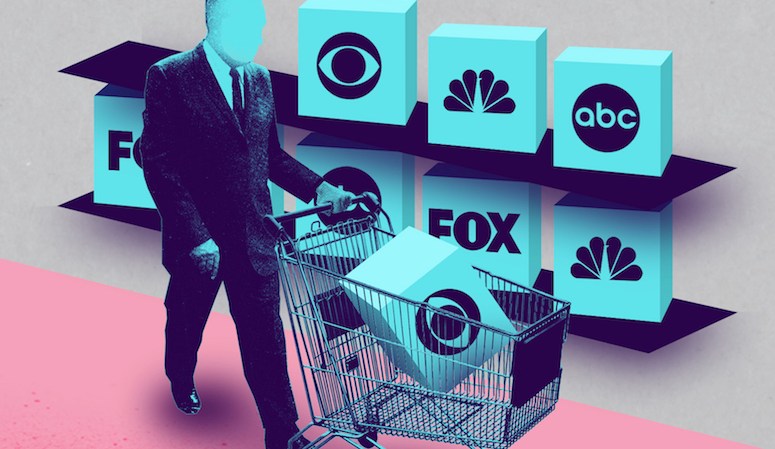 Talk to enough ad buyers, and you’ll eventually hear a pretty common phrase: “No one loses their job buying GRPs.”

It’s true. The GRP, which stands for “gross ratings point,” is a metric that plays a central role in the $70 billion U.S. TV advertising market. It’s what advertisers use to determine how and where to place commercials and what TV networks use to prove they’re worth all that money. But what exactly is a GRP and why is it so important?

What is a GRP, exactly?
Very simply, it’s a math equation used by media planners and buyers to determine how many people within an intended audience might have seen their ads.

For instance, say you wanted your ad to be seen by women between the ages of 18 and 49, and you knew that 40 percent of TV viewers in that demographic watched ABC’s prime-time programming every Wednesday night. Since you’re advertising a new product, you decide to run three commercials between 8 and 10 p.m. The GRP would then be 120: 40 percent of the target audience reached, multiplied by the number of times the ad aired, multiplied by 100 (for a nice round number). This is just one specific example as GRPs can be calculated for total reach as well as exposure by different demographics, times of day and media markets, among other criteria.

How do advertisers know that 40 percent of anybody watched anything?
Nielsen. The measurement giant’s TV ratings provide estimates on the percentage of the total TV viewing public, as well as the percentage of viewers within certain demographics, that watched a particular network or TV show. There are 118.4 million TV households in the U.S., and Nielsen provides estimates for viewership based on a panel of 40,300 households that report their viewing patterns on a daily basis.

Wait a second, this is all done based on .03 percent of all American TV households?
Nielsen says its panels accurately represent the total TV viewing public in the U.S., but there are obvious inefficiencies with how they crunch viewership. The ugly truth is that everyone agrees on Nielsen and GRPs as the standard, and ultimately that’s all that matters.

Who invented this racket?
No one knows. But the GRP has been around since the 1950s — back when there were only a handful of TV networks and all advertisers cared about was whether people saw an ad (forget social shares).

“It was a way during the pre-internet TV era to get a sense of how many people you actually reached, because that was what advertisers were concerned with,” said Alan Wolk, TV analyst and consultant at Toad Stool Consultants. “If the Chrysler brand was in front of them enough, when they decide to buy a new car, they might go with Chrysler because they saw the ads.”

This sounds very simplified.
There are additional complexities because advertisers are not buying only one TV program or just one TV network. But the point of a GRP is to estimate and measure the total exposure of an ad among a target audience, which means the approach changes depending on what the advertiser wants.

Does the GRP measure whether ads worked?
That’s the thing: GRP is a branding metric. It’s reasonable to believe that if someone watched an ad for a product enough times that they might go out and buy that product, but it’s hard to connect the two directly — and, yes, a GRP won’t tell you how many people were in the bathroom or switched channels during commercial breaks.

“Do you go for more frequency with a smaller audience or less frequency with a bigger segment? It depends on what you wanted to do,” said Wolk. “The media planner decides that the agency wants to buy 500 GRPs during daytime programming, for example, and then it’s up to the buyer to determine which networks will help achieve that.”

How does GRP affect ad pricing?
Some advertisers do negotiate based on a “cost per rating,” said Nick Pappas, CEO of ad agency SwellShark. “You can come in and say, ‘In this market, I’m willing to pay x dollars per rating point against this demographic — it’s the same way as CPMs,” he said.

What’s important to remember is that GRPs are used for planning and measuring purposes. Pricing for TV inventory is determined by a variety of factors including how many viewers a program gets, the demographic the advertiser wants to reach and type of programming — and, of course, GRPs play a role in this.

I’m not sold. It still feels like a flawed metric.
You’re not wrong. Just because an ad aired on a TV network doesn’t mean people actually watched it. Also, with the rise of DVRs, the value of the GRP changes based on whether people watched a show when it first aired on TV or at a later time.

So, then, why does the GRP matter?
The GRP is still the dominant metric in how TV advertising is bought. Similar to Nielsen’s role in measuring TV viewership, everyone agrees on the GRP as the top “currency” for planning and buying TV and other forms of traditional media.

“It remains one of the few places you can buy ad scale in a short amount of time because of the sheer number of people consuming content on TV,” said Freddy Flaxman, COO of The Weather Channel. “It’s not uniques; it’s not ‘monthly actives’; we can say, using a GRP, we can serve this quantity of consumption of your ads in a given month or quarter or year.”

If it’s so important, is it available online?
Today, metrics like CTR (click-through rates), CPM (cost per thousand views) and CPV (cost per view) dominate online advertising. Many advertisers have asked digital media companies to offer GRPs, which they argue would make it easier to make an apples-to-apples comparison between TV and digital advertising.

To some extent, digital media has caved in as they crave some of the $70 billion spent on TV advertising every year. Facebook offers a product called TRP (“total rating point”) Buying, which uses Nielsen’s Digital Ad Ratings data to measure how well Facebook’s ads perform alongside TV spots. Snapchat, too, works with Nielsen.

Hulu and streaming platforms owned by TV companies also offer GRPs. “It’s used when you have a traditionally television-heavy advertiser that’s moving money to digital to reach viewers that aren’t watching TV,” said Pappas. “For clients that are digital-first, it doesn’t come up. Some of them don’t even know what it is.”

So what you’re telling me is I should ignore all those stories about how the GRP is dead?
Unless you think click-through rates are the future of advertising.

For more insight into the acronyms, people and companies defining the future of video, subscribe to our weekly video briefing email.