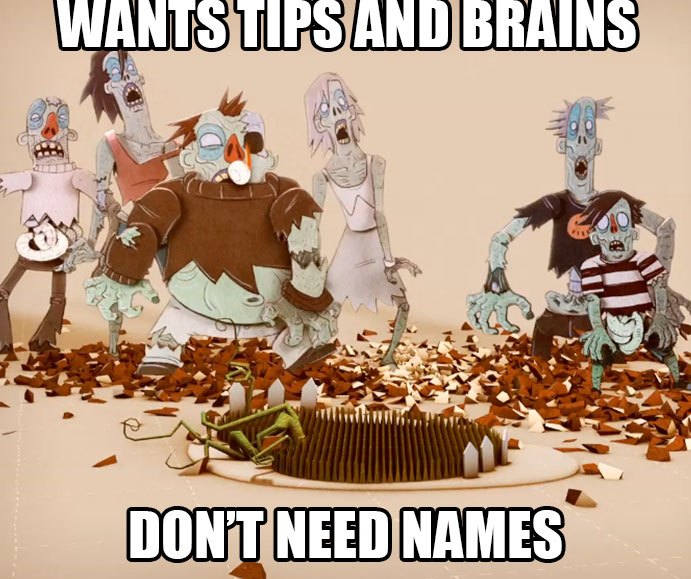 Despite an uptick in crimes at Toronto schools, the civic group Toronto Crime Stoppers found that students weren’t coming forward with information for fear of being identified. Snitches get stitches, the saying goes. So Crime Stoppers — with the help of agency DDB Toronto and Tribal DDB Toronto — has come up with some fun videos to demonstrate to young people just how seriously the organization takes their anonymity.

To make their point, Crime Stoppers’ claymation-style videos portray the hyperbolically baroque lengths to which they go to protect tipsters. In the clip, tips are lit on fire, then squashed by an elephant who then poops on it. Then, obviously, zombies eat it and then it gets bulldozed. The idea is, as the video explains, “When you leave a tip, you leave no trace.” The serious message behind the humor: kids don’t need to fear retaliation for telling the police about crimes.

“The ridiculous story lines came about because the whole way Crime Stoppers goes about concealing your identity is kind of boring, and kids have short attention spans and want to be entertained, so we had to go make it fun,” said Rob Sturch, associate creative director at DDB Toronto.

The fantastical, bizarre-but-entertaining claymation videos, which were created with the help animation companies Polyester and La Flama, are of reminiscent of the “Dumb Ways to Die” video from McCann Australia for Metro Trains, which went superviral earlier this year.

While the videos are up on the Crime Stoppers’ YouTube channel, DDB also created a Tumblr page to house them, along with meme-style macros with phrases like, “Don’t be a hipster, be a tipster.”

“The Crime Stoppers’ channel has a lot of the other content that isn’t so appealing to kids, so creating the Tumblr allowed us to have the work presented in a way that’s better for them,” said Paul Riss, associate creative director at DDB Toronto.