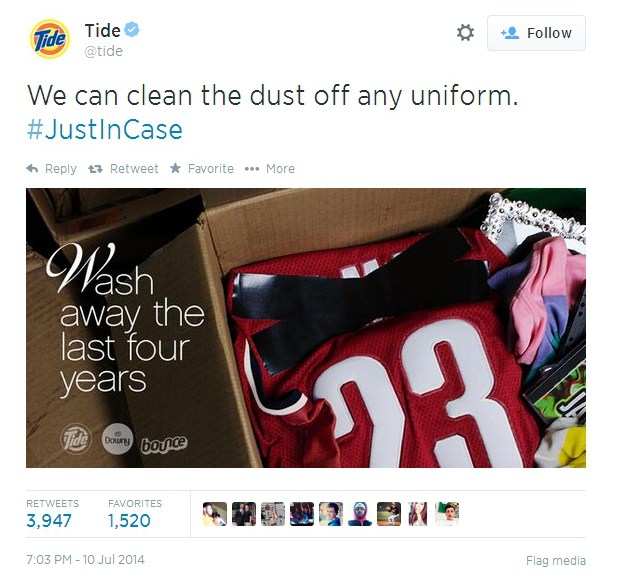 It is now regular practice for brands to “trendjack” in social media with whatever’s percolating, so it’s no surprise that many brands got in on the LeBron James chatter.

But Proctor & Gamble brand Tide pushed the envelope. On Thursday, a day prior to James’ decision to return to Cleveland, the P&G brand tweeted what it thought was a fun, timely piece of content: a photo of what appears to be a Cleveland Cavaliers jersey No. 23, with the words “Wash away the last four years.” Below that are the marques for P&G’s Tide, Downy and Bounce brands. It’s a clear reference to NBA superstar LeBron James, who announced Friday that he will be playing for the Cleveland Cavaliers next season. Perhaps too clear, using James’ old jersey and what appeared to be his name.

The tweet was deleted around noon Friday. P&G did not respond to multiple requests for comment about why.

The tweet got some solid numbers: over 9,000 retweets, 4,000 favorites, and any number of “This is the best brand tweet ever” headlines. It’s not clear whether it was promoted or not, but by comparison, other @Tide posts, such as this one about the U.S. soccer team, got under 200 retweets, indicating that the LeBron post definitely enjoyed some higher visibility.

But the use of another brand’s imagery and font, to say nothing of a team’s proprietary colors, brings up an interesting question about the trademark and copyright infringement in social media.

There are two issues at play. One is the question of whether social media posts are considered ads. The second is: Is the tweet an actual reference to a celebrity?

Jeffrey Greenbaum, managing partner at Frankfurt Kurnit Klein + Selz and chairman of the Global Advertising Lawyers Alliance, said there is “significant concern that courts will look at social media posts by brands and say they are ads.” At the same time, looking at the @Tide tweet, he said context is everything: it’s LeBron James’ number, at a time where there is a public discussion about where he’s headed. Replies and retweets also indicate “consumer confusion,” he said. ”You have to consider will consumers be confused about whether this team or league or person has sponsored or endorsed or authorized this post,” he said.

The issue has come up before. Pharmacy chain Duane Reade was sued by actress Katherine Heigl for $6 million in damages for tweeting a picture of her leaving the store with Duane Reade bags. At the time, questions arose whether brands could imply endorsement from celebrities in social media — something they definitely wouldn’t think about twice in “real” ads. The case is still ongoing, and if judges rule in favor of Heigl, will provide some precedent.

“Brands need to be extremely cautious and do their research,” said Matt Wurst, vp of social media at 360i. “The process can be built in where creatives are checking with the legal department.”