‘The buzz from Bloomberg has other people looking’: Why 2020 is going to be the influencer election 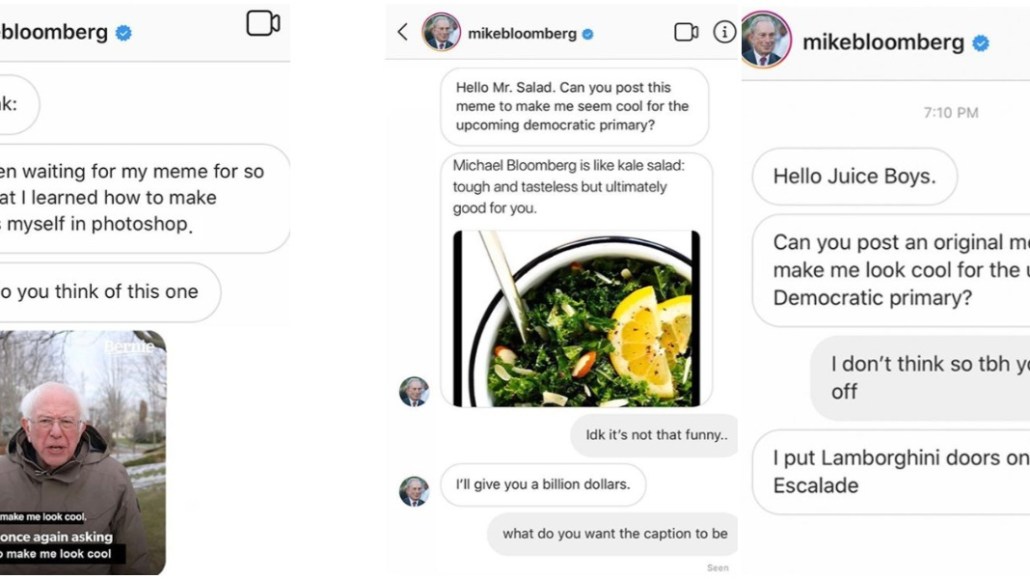 The 2020 presidential election may not only be the meme election but the influencer election.

Last week, a flurry of ads paid for by the Michael Bloomberg campaign were posted by dozens of influential meme accounts like @KaleSalad and @Tank.Sinatra. The ads, which come from a new company, Meme 2020, didn’t say much about Bloomberg as a candidate or tell the accounts’ followers how they should vote. Instead, the campaign used the meta ads — text-like messages between the Bloomberg campaign and the account poking fun at Bloomberg’s attempt to seem cool to younger voters by using memes — as an awareness play.

“We’ve been getting a lot of inbound interest in paid campaigns,” said Ted Murphy, CEO of influencer marketing platform Izea. “The buzz from Bloomberg has other people are looking at influencer marketing as a potential strategy.” Murphy declined to share where the requests have come from or identify if they are from other presidential candidates.

Ryan Detert, CEO of Influential, agreed that political influencer marketing is on the rise. “It’s going to continue to grow,” said Detert before cautioning that pure-play endorsements of particular candidates will likely cause backlash for influencers. Instead, Detert believes that the use of influencers will be similar to that of Bloomberg’s meme strategy, i.e. they will be used as part of an awareness strategy rather than paid to post about why they are voting for a particular candidate. “If it feels forced there will be backlash,” said Detert.

Using influencers for a paid awareness strategy makes sense to Sway CEO Danielle Wiley. “Younger voters are not seeing TV ads,” said Wiley, adding that using influencers can help candidates reach millions of 18 to 24-year-olds where they are spending their time. “ Purely for impressions and eyeballs, [influencer marketing] can be huge.”

It’s unclear how much money is being spent on influencers this campaign cycle. As previously reported by The Daily Beast, prior to the meme strategy the Bloomberg campaign worked with branded content marketplace Tribe to pay influencers $150 per post. Spending on television ads during this campaign cycle, meanwhile, has topped $435 million with $230 million of that by Bloomberg, according to the Wesleyan Media Project.

Still, even with potential disclosure or brand deals at play, experts believe political influencer campaigns are here to stay. “I think this will be the new normal,” wrote Kristy Sammis, executive director, Influencer Marketing Association. “Influencer marketing is now a known, established tactic – along with billboards and tv commercials. It’s worth noting that the guy behind the meme-ads is the chief executive of Jerry Media, which promoted the Fyre Festival. And I’ve said before, the influencer strategy was the ONLY thing about the Fyre Festival that actually worked.”