Thanks to mass events postponements, media events stack up in the fall 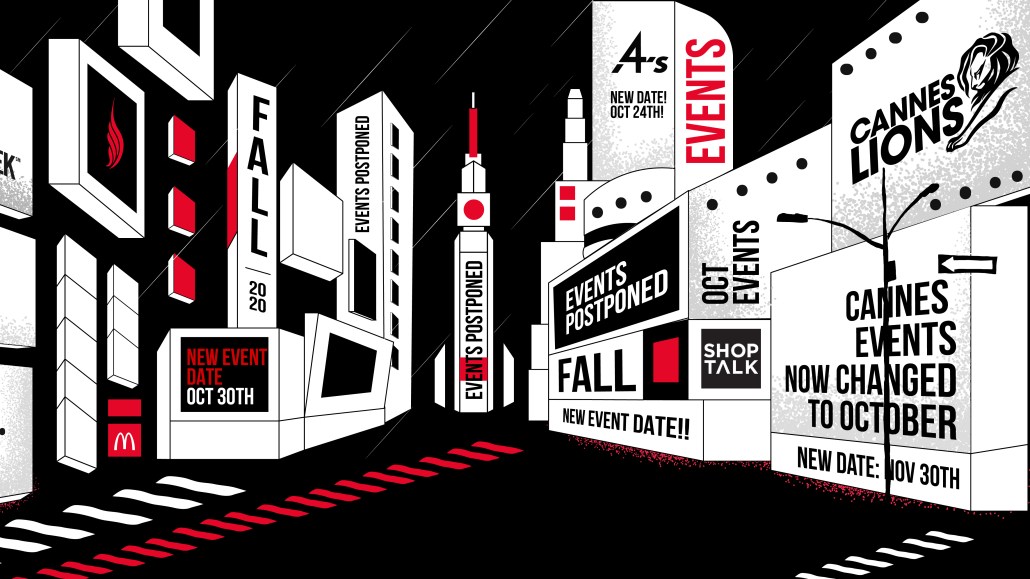 The media industry’s events schedule is hectic enough without the disruption coronavirus has caused, leading many key industry events to push back to the fall.

Working on the assumption that the coronavirus situation will be somewhat under control after the summer, a swathe of events due to take place in the first half of the year are now packed into a small window alongside existing events. Here’s just a small example:

That’s not to mention many other smaller events from other b2b businesses and publishers that have been postponed or that were already in the calendar for the latter half of the year. Many internal company get-togethers have also been shifted back to later this year — clogging the calendar further.

To be sure, the disruption caused by the coronavirus outbreak stretches far beyond events, affecting most business functions and everyday public life in dozens of countries. It’s unclear how long the situation will last and how severe the lasting effects will be on the economy. Once a semblance of normality does return, executives in sectors ranging from retail, to travel and luxury will be working pedal to the metal to recoup any lost sales.

“Getting marketers to attend these [rescheduled external] events is a real issue,” said marketing consultant and academic Mark Ritson. “I’m speaking to people at very large brands in global settings that are talking about 40, or 50, or 60% reductions in revenues” due to the coronavirus outbreak.

Ritson added, “Even if coronavirus comes to a conclusion in August or September, none of these companies have any money: All of them are going to have to do double-time to try to get as much short-term income into Q4.”

Event organizers too will be looking to make up potential lost revenue before the year-end (not least as many of their insurance policies don’t cover the fallout from infectious diseases,) which looks likely to set up a bunfight for attendees, speakers, sponsors and available venues with capacity.

“I think we are just scratching at the surface of understanding the second-order effects of this,” said Ana Milicevic, cofounder of management consultancy Sparrow Advisers.

The unexpected quiet period means many media execs may enter a period of reevaluating which conferences are must-attend events — especially given the calendar congestion later in the year.

“The impending lockdown and rescheduling gives us an opportunity to really look at the ROI,” of industry events, said Milicevic. “We’ve seen quite a few people take quite a liberal approach to understanding the ROI of individual conferences … there’s a certain muscle memory there.”

The choice to postpone versus cancel an event may also impact sponsorship. Companies sponsoring a series of events throughout the year may not see an advantage in squeezing that marketing activity into a shorter period at the year-end — an outlay that might not yield until the next financial year anyway.

“I think everybody’s kind of assuming it’ll be back to business as usual, but have you ever met a CFO? As soon as there is an opportunity not to spend on something, they will take that opportunity,” said Milicevic.

For Stillwell Partners, which runs the Advertising Week events, the objective behind pushing back Advertising Week Europe was “not to lose 2020,” said Matt Scheckner, Stillwell Partners global CEO. “It has been very humbling, the response that we have gotten from our partners. Everybody is with us — these are long-term relationships. I think there’s a camaraderie among people in our business right now.”

While Advertising Week Europe now enters a more crowded field than usual, Scheckner said the company has always always tried to differentiate its events from the competition, with a lineup of activities that ranges from invite-only executive leadership breakfasts, to late night pop concerts and an online learning program. Also, Scheckner added, “Our product is built for everyone: It’s accessible for young people, accessible geographically, [and in] what it costs to attend.”

U.K. based business-to-business media and events company Informa said earlier this week it had postponed or canceled nearly 130 events, worth around £425 million ($553 million) in budgeted revenue so far this year, due to the coronavirus crisis. Informa CEO Stephen Carter conceded there will be questions about how much of the revenue tied up in its postponement program will recur.

“Will there be a dilution effect, will there be a decay effect, will people never want to get on an airplane ever again in their life effect … you’ve got to make your own judgements about that,”  Carter said in a presentation to analysts on Tuesday. Informa had benefited from its “scale, our reach, and in some cases our relationships and in other cases our muscle, to secure capacity to give us that optionality,” to be able to postpone events until later in the year, said Carter.

Not every company will have the heft to lift and shift a large event.

Manders Terrace also owns the Collision tech conference, which was due to take place in Toronto in June but will now be held as an online-only event instead. Attendees will be able to livestream talks, attend virtual workshops and will be encouraged to network using the Collision from Home app, which will use an algorithm to match users with the content and people deemed most relevant to them.