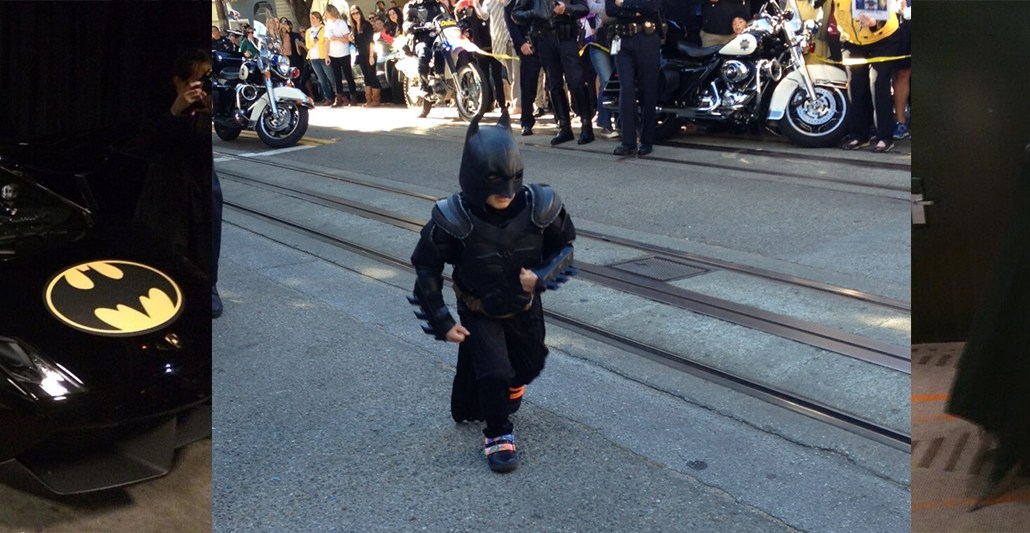 Five-year-old cancer patient Miles Scott, a.k.a “Batkid,” marched around the streets of San Francisco on Friday saving damsels in distress, locking up supervillains, and generally warming the hearts of the city’s residents, all thanks to the Make-A-Wish Foundation’s Bay Area chapter.

But for those that weren’t in San Francisco that day, the first they heard of Batkid was probably through social media. As soon as Batkid took to the streets of “Gotham City” in his Batmobile at 10 a.m., the Internet erupted with buzz about his antics and his whereabouts. Thousands of people lined the streets to see him in action, but hundreds of thousands more followed along online over the course of the day.

The viral success of Batkid’s big day was a coup driven in part by social media agency Clever Girls Collective, which helped devise and execute the social media strategy behind it.

To date, over 550,000 tweets have mentioned the #BatKidSF and #BatKid hashtags, generating an estimated 1.7 billion impressions, according to social analytics firm Simply Measured. Social media well-wishers included celebrities Britney Spears and Enrique Iglesias; sports teams, including the San Francisco Giants, the San Francisco 49ers and the Golden State Warriors, and even an astronaut at the International Space Station.

Ben Affleck admitted he could never live up to Miles’ performance as Batman, and President Obama even took to Vine for the very first time and tweeted a short video message of encouragement.

Clever Girls Collective approached Make-A-Wish to help the Batkid story reach as many people as possible – something the foundation seemed ill-equipped to do by itself. The agency’s president, Stefania Pomponi, said she heard about Make-A-Wish’s Batkid plan through a tiny blurb on a local San Francisco blog and thought it was under-publicized. She spotted an opportunity to help out and emailed the executive director of the foundation’s SF chapter that day, Nov. 3.

“They didn’t have a social media plan or a press release, yet the plan was starting to spread through word of mouth,” Pomponi said. “We saw the chance to do a lot more promotion around it.”

Make-A-Wish Greater Bay Area Executive Director Patricia Wilson accepted Pomponi’s offer to help, and Clever Girls Collective set to work creating a plan. Other companies pitched in, too. Twitter, for example, helped secure accounts such as @SFWish and, for the bad guy, @PenguinSF for use in the campaign.

Pomponi said her agency went about creating a script for the day’s social media events in conjunction with Make-A-Wish. Using Batkid’s itinerary, it planned key plot points using the @PenguinSF twitter handle and planned which photos, videos and other media it would include and when.

The Penguin used his @PenguinSF account to taunt Batkid throughout the day, for example, with tweets such as this one that included a picture of him kidnapping the San Francisco Giants mascot Lou Seal.

Clever Girls Collective also came up with the #SFBatKid hashtag and began seeding it with 6,000 key San Francisco “influencers” and Twitter users. The idea was to ensure that #SFBatKid would begin treading as early as possible.

On the day of Batkid’s adventure, two staffers from Clever Girls Collective were also embedded with his entourage, snapping pictures and videos and posting them from the various Twitter accounts associated with the day. Meanwhile, the rest its staffers were back at its offices doing their best to reply to Twitter users, especially high-profile ones.

The resulting social media buzz around the day exceeded Pomponi’s expectations, she said. She expected the reaction to be huge but not that huge. She didn’t expect tweets from space and from The President.

Clearly, the Batkid’s story was ripe for social media audiences as it was, but Pomponi thinks organizing the effort made a difference, even if it was just to ensure that simple things were in place, like a consistent hashtag. It was more about preparation than execution, she admitted.

“Batkid is pretty much the greatest story ever,” she concluded. “We knew the real work was steering activity. We focused on setting the social media stage so that the story — which deserved to go viral — actually could.”