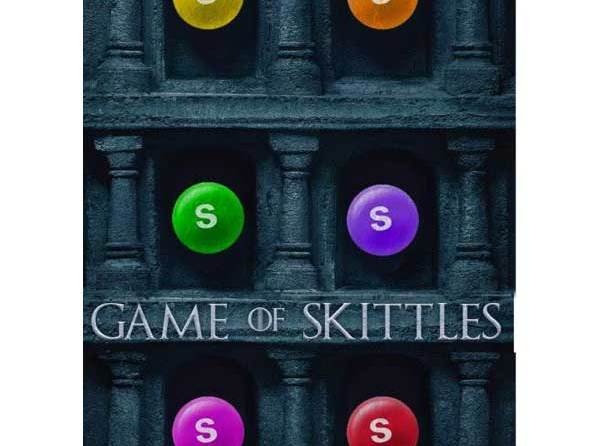 Social media blew up last night with Donald Trump Jr.’s tweet that features an image of a bowl of Skittles, comparing Syrian refugees to poisoned candy. No surprise, this Skittles tweet sparked outrage for refugee comparison on social, and some agency executives wasted no time in giving it a fun twist.

“I’d play that up, all the ways Skittles can kill you seems like a pretty entertaining revisionist history series,” said Matt Lucero, creative director for Carrot, came up with the copy “Skittles would kill you? Ouch.” “My imagination goes in so many different places. The ancient Skittles invasion of 10 B.C., the fall of the M&M Mpire [M&M’s Star Wars Chocolate] and the evolution of their preferred weapon: The rainbow and arrow.”

Meanwhile, Daiga Atvara, chief design officer and Peter Sayn-Wittgenstein, executive creative director for agency Mirum, designed a campaign together if Skittles felt like fighting a good fight. (If Skittles was their client, they’d suggest the candy brand stay with the statement its parent company issued.)

For instance, Skittles could launch a viral campaign of people eating Skittles while doing extremely dangerous activities like standing in a room of lions, dodging flying swords or fighting Ninjas. Or the company could ask people to film themselves eating bowls of Skittles in the most outrageous way: Catching the candy in their mouths after being shot out of air darts. Tagline: Can you survive a bowl of Skittles? Hashtag: #SkittlesSurvivor.

“Alternatively, Skittles could sell special packages that contain only three pieces of candy for $1. All proceeds from the sale will go to a charity for Syrian refugees,” said Sayn-Wittgenstein.

Jason Sperling, executive creative director for RPA, on the other hand, gave his version of Skittles retort, which the brand would never do: “If you give Donald Trump a bowlful of Skittles and let him throw them at all the people he hates, how many times will you have to refill it?” Sperling wrote in an email.

Outside of the agency world, Chris Scott, a freelance writer in Washington D.C., wrote a fake statement for Skittles, which has garnered more than 1,300 likes on Twitter so far. And some people even thought that the statement was real.

Wow this statement from @Skittles is something else pic.twitter.com/tFr3hp3IRI

“I thought that Trump’s tweet was offensive and everyone clamoring to see how Skittles would respond was a little over-the-top and absurd,” said Scott. “Since some kind of response was inevitable I thought it’d be funny if Skittles took the opportunity to be brutally honest about its product, which I’m not a fan of.”