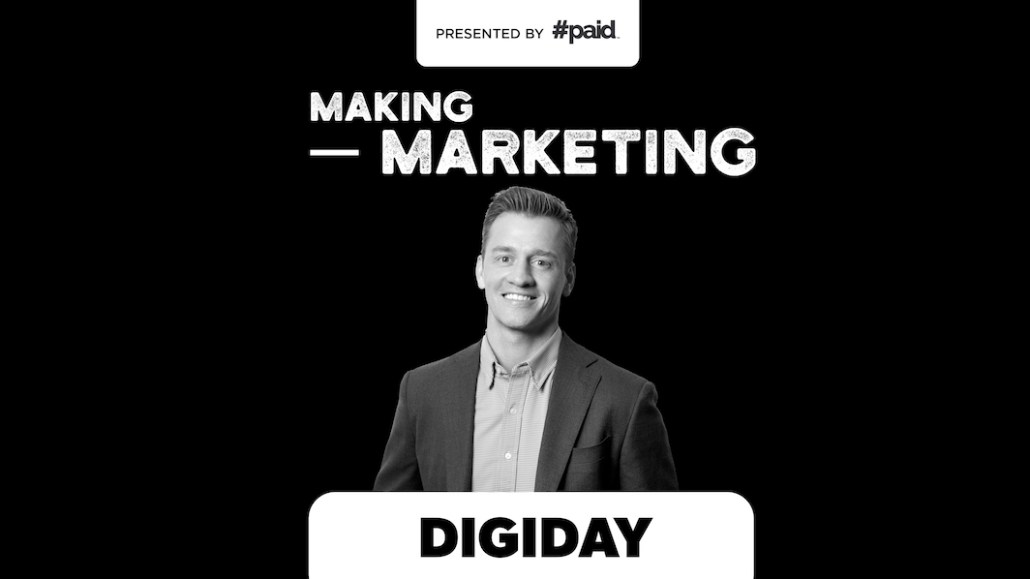 Working at the NFL gave Rhone CEO Nate Checketts a pretty good lay of the land as far as men’s activewear went. And what he saw was a big hole in the supply-side of the market. “Lululemon was really leading the charge” in marketing premium workout clothes to women, he said. “And then you had all of these brands that were there going after the same customer.” But no one seemed to be doing that for men. “If you were to look at the men’s side — at, call it a 40% price premium to the Nike, Under Armour, Reebok, Adidas of the world — it was crickets. It was nobody.”

So Checketts co-founded Rhone, a clothing company meant to give guys threads that they can wear at the gym, in social settings or often both.

In this week’s episode of Making Marketing, Checketts talked about just how far back the DTC model goes, why it’s easier than ever to go small (but harder than ever to go big) and the tough standards venture capitalists often judge brands by.

DTC is the oldest school there is.
“I think it’s become this misnomer when people talk about DTC brands. That’s the original business model. The first person to do commerce invented DTC. It was like ‘I have a product, you’re going to buy the product, now we have a relationship.’ There’s been this level of complexity that’s been added over time and now we’re going back to this DTC, and what’s enabled it is technology. To me, the big difference now is brands that have started in a digitally-native environment versus a brick-and-mortar environment or a wholesale environment. So you have all these channels but what’s changed is that the primary channel now is e-commerce. And the way you think about developing a relationship with a customer starts digitally, for the most part.”

The toughness of micro-competition
“It’s hard, but it’s easier than ever before to build a $5 or $10 million brand. To scale past that? That’s incredibly complex, because there’s so much micro-competition. Before it was, ‘You have to get niche, you have to focus on a specific set of the market.’ Now, because it’s easier to start, every single segment has someone already there. Let’s say you want to make phone cases targeted to 18-year-olds that live in Alabama and are huge fans of Crimson Tide. That’s pretty narrow, but I guarantee someone’s already doing that. Before, if you broke through that initial glass ceiling, getting from $10 million to $100 million seemed a lot easier because then you had wholesale relationships that you could scale to get you in front of a lot of people. Now you’re just competing with everybody, the big guys on the food chain, all these small micro-competitors. So in some ways it’s more competitive than ever before to get past that second glass ceiling.”

Retail is still big, even for brands synonymous with DTC
“I think there’s a good rationale for being omnichannel. What wholesale can bring to you is they can help you reach a brick-and-mortar customer that you simply from a balance sheet can’t reach otherwise. It’s expensive to open stores. And guess what? The majority of clothing is still bought in a physical environment. And I know for millennials and digital customers, that blows your mind. I was having a conversation with Neil Blumenthal at Warby Parker, I was like, ‘You’ve opened 100 retail stores, why did you do that?’ He said, ‘Guess what? 85% of eyewear is still purchased in person. We get all this credit for being this incredible millennial direct-to-consumer brand, but the reality is we’re missing the biggest part of the audience if we don’t open retail stores.’ Clothing is still the same way.”

More money, more problems?
“A lot of technology money has been burned over the last 10 to 15 years, and it’s a much more binary space. If it wins, it wins so big, and you’re seeing return profile in the thousands, which is just unbelievable. Or massive amounts of money being lost; a company will raise $800 million and go bankrupt. In the consumer DTC landscape, that’s far less the case. In the world of venture capital, they will call it singles, doubles, triples, almost obnoxiously. Like, ‘Oh, it’s a nice, safer play.’ You’re like, ‘We’re growing 150%, could you just give us a high five today?’ But the truth is that technology money, in an effort to balance out venture portfolios, started coming into consumer, following a similar playbook, saying, ‘Hey, unless you’re growing 100+%, we’re not even going to pay attention to you. And yeah, I think venture in some ways kills as many businesses as it helps support. And I applaud entrepreneurs who don’t take money and try to stay the course.”