Why So Much Real-Time Marketing ‘Sucks’

The anonymous Tumblr Real Time Marketing Sucks has been diligently keeping its readers up to date on the latest real-time marketing fails by brands — something we are fond of doing ourselves at Digiday.

We reached out to the people behind the Tumblr, who wish to remain anonymous, about why they started this funny, cutting blog that takes a critical eye to this overheating marketing trend. We discussed whether real-time marketing is really worth all the hype, the Oreo Super Bowl tweet heard round the world and what their favorite RTM fail is. Excerpts:

Why start this Tumblr?
RTMSucks began the night of the Oscars. One of us was following the conversation that Edelman’s David Armano started with the #OscarsRTM hashtag inviting “marketing insiders” to discuss what the night would produce in the form of real-time marketing. What became apparent rather quickly was how boring the real-time efforts were.  Everything from Special K cereal sitting in auditorium seats, clip art from JCPenney, and a Polar Bear on a treadmill. It was a circus side-show and an embarrassment to marketing, not that marketing hasn’t had a ton of embarrassing examples we can all collectively face palm.

Was the Oreo Super Bowl blackout tweet worth all the RTM hype?
In some ways, it deserved the hype. It was truly in the moment. Though, like any hype, some of it got out of hand especially with the social media press acting like all of the TV spots meant nothing compared to Oreo’s brilliance. Keep in mind, barely anyone mentioned the other 10 or so brands that did real-time also during the blackout. What no one talks about is how Oreo ran a set of planned social media posts trying to capitalize on the Oscars social conversation doing #OREOmotionpics. They ran three tweets before realizing how sad real-time marketing became that night and likely pulled the plug to maintain their superiority instead of becoming a casualty during a low moment in social marketing.

Do you see the Oreo tweet as the real starting point for this RTM craze?
Kenneth Cole tweeting #Cairo happened before this year’s Super Bowl and that was RTM — a really poor example of it. But it wasn’t the first either. Oreo gave every social media content team without a strategy the gift of a content strategy: Listen to what is happening that day, and create a post on social media that references the social conversation in a fun way.

Why is being real-time so important to brands these days? Should it be?
Brands need content that will generate positive engagement to justify their social media team’s work. A lot of clients don’t know how to measure social media value, so having more of something even the client doesn’t understand, such as engagement, feels like success. Real-time gives brands something to talk about that can be more exciting than Eat Country Ham Month which is great if you sell ham, but irrelevant if you sell cars; though, Ford did do a bacon car recently so maybe Honda could do a ham car this month.

What’s the worst example you’ve seen of a brand’s attempt at RTM?
So many to choose from, yet they all suffer from the same formula: The brand forces [an attempt at] being relevant by doing some lame-looking image in Photoshop. The “Spaniel Day-Lewis” tweet during the Oscars from the Purina Petcentric social media team was awful. Bad copy including two exclamation marks, bad Photoshop design and the worst forced relevance by changing an Oscar winner’s name. Then to push it even more over the top, the copy asked their followers to “RT if you agree!”  It received one retweet. We’d bet it was from someone from the agency or client that was involved. 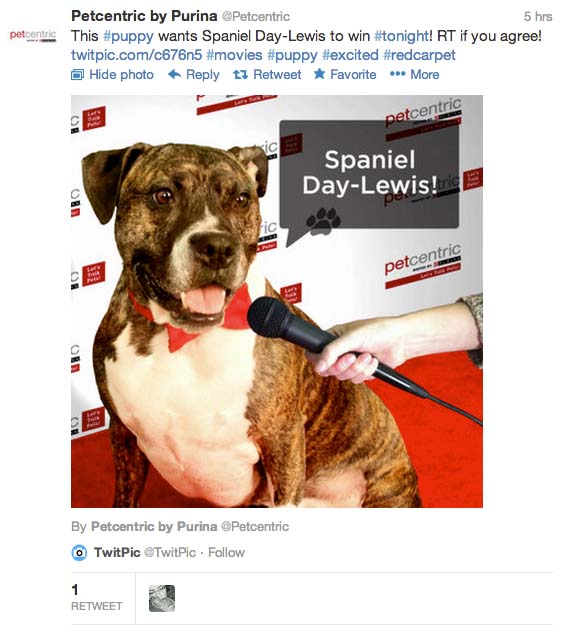 What’s the best?
Besides Oreo’s Super Bowl Blackout tweet, because it was actually real-time content created in the moment that fit the brand’s existing strategy? Not a lot to choose from. We were pretty easy with Target the other night. They were creating posts on Twitter that showed a celebrity on the red carpet and then laid out a similar looking outfit using their product and the hashtag #Tailored and #Emmys to fit into the event that was going on. It was a great effort since it was relevant to their audience watching the Emmy’s and it brought in their product in a meaningful way. 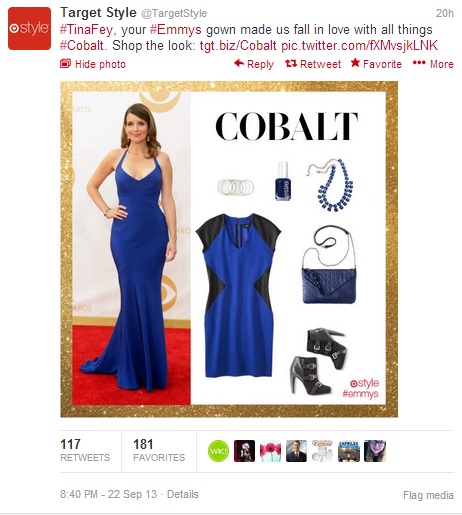