Pressing buy: The state of mobile commerce in 5 charts

In just two years, nearly half of all e-commerce transactions are likely to occur on mobile phones.

Following serious investment from brands, mobile has moved from a pre-purchase tool to a place where users are actually clicking the “buy” button — be that on their sofa or the train to work.

“Retailers and brands are finally realizing they need to think about mobile as a complete channel in its own right,” said Andrew Pearl, director of strategy and insight for Europe at Profitero.

Here are five charts that break down the state of mobile commerce today:

Apps are king, for now
App downloads are slowing globally but spending within apps remains robust.

A mobile commerce report from Criteo found that apps accounted for 54 percent of retail transactions in Q2, a 7 percent rise from the same period last year. The study looked at 3,300 online retailers worldwide.

While mobile browsers had seen bigger baskets in the past, Criteo’s report found customers will now spend more in a retailer’s app, with the average order at $127 (£102). Browsers net only $95 (£76) on average.

Stewart Emerson, director of product marketing at Criteo, said the mobile web is catching up with apps with user experience. However, apps remain king for now.

“Of the top retailers who are winning on mobile, a large part of their story is winning on app,” he said.

Millennials are using their mobiles while in-store
Millennials spend a lot of time on their mobile: GlobalWebIndex puts the figure for 16- to 24-year-olds at 3.26 hours daily.

As such, members of that age group tend to be more comfortable making purchases online. Beyond that, more than 40 percent said they use their devices to research products and compare prices, too. 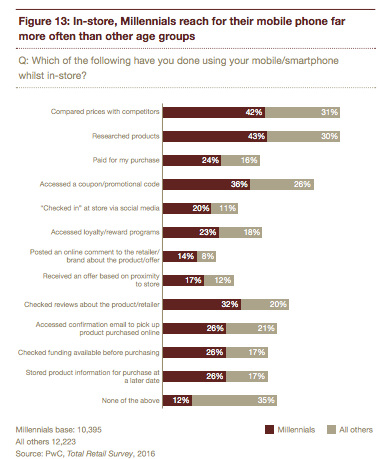 The group was also likely to use their smartphone to find coupons and “pin” products to buy at a later date.

“Young people are growing up with this mentality that the shopping experience is omnichannel,” said Profitero’s Pearl.

“It’s about giving them confidence in the decision they are making. Buying the right product at the best price, and knowing what their peers think too.”

In the U.K., retailers have been criticized for being unable to close the gap between the online and offline shopping experience. Sainsbury’s has been testing an app that can be used in-store. Meanwhile, shops like Asda and Topshop have rolled out Wi-Fi to customers.

Social shoppers are bigger shoppers
Another Criteo report of 2,032 consumers found that heavy social media users are more likely to buy on their mobiles in the U.K. 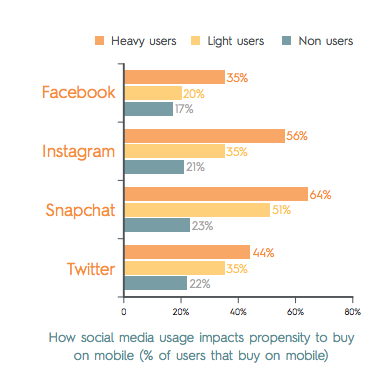 Social platforms have been shifting their focus to e-commerce with the addition of buy buttons and shoppable content. Despite the fact Snapchat makes it difficult for brands to link out to products, its users are still the most likely to buy on mobile.

The most popular products being bought here are “impulse” items like clothes, followed by music.

Asia is leading the way for mobile sales
Asia as a whole is ahead in mobile commerce. One IAB study found that 47 percent of Chinese shoppers reported buying from their phones on a weekly basis — double the global average, which came in at 23 percent. Across Asia, nearly a third (31 percent) of respondents said they shopped on a mobile or tablet on a weekly basis. 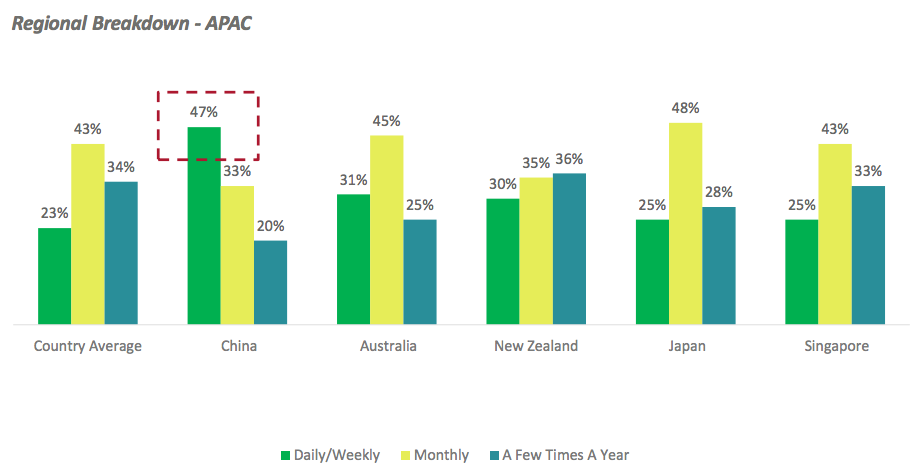 More than two-thirds (69 percent) of Alibaba’s sales on the shopping holiday Single’s Day for 2015 were on mobile devices, a 26 percent increase from 2014.

Criteo says the adoption of mobile commerce broadly follows improved mobile infrastructure, like 4G.  Japan, an early adopter of 4G, is a key market for mobile transactions, for example.

“Many of these countries are used to working through a mobile phone. So much so that many retailers have skipped the web altogether,” said Miriam Newton, Criteo’s vp of product marketing.

However, the U.K. is catching up. Thirty-nine percent of U.K. respondents in the IAB survey said they made purchases weekly — more than double consumers in France and Sweden. The U.K. was also the country that was the most content with its mobile shopping experience.

The user experience still needs work
While there is no doubt mobile commerce is on the rise, it’s not perfect. Forty-two percent of respondents in Criteo’s survey said mobile shopping was not an enjoyable experience and that they didn’t trust it.

Meanwhile, in the IAB’s recent global mobile commerce survey, trust was the biggest concern across all markets.

While consumers are more comfortable paying and signing-in with their phone than ever before, they still complain of a clunky check-out experience.

“Shoppers could certainly be encouraged to use mobile shopping more if the experience was more pleasurable,” said Pearl, who recommends better images, tailored mobile search algorithms and easy access to pricing and product reviews.