#PopeinUS: How brands and publishers are turning a buck on the papal visit

The pope has gone pop.

As Pope Francis begins his historic visit to the United States this week, there are plenty of papal parasites hoping to make a dollar, or maybe scrounge some eyeballs. In the first hour since he landed in D.C. from Cuba, there were 42,000 tweets about his visit, according to Topsy.

“In some ways, it’s not unexpected,” said Megan Hartman, who leads strategy at Red Peak Branding. “There’s always excitement around the pope, regardless of who it is.”

But Pope Francis evokes extra emotion because he himself has a very defined “personal brand,” said Hartman, that especially appeals to millennials. “His brand is about inclusivity and humility and simplicity, which really resonates well.”

Pope Francis is the “cool pope,” the one who focused on the downtrodden and is down with selfies.

But he’s also the pope most fiercely against what he calls the “tyranny of capitalism,” which makes the outpouring of crass commercialism even more, well, crass. There’s “You Only Pope Once” beer which contains an unholy amount of hops, produced by Cape May Brewery. There’s a pope toaster for $48.95 and a pope plush figure sold for $19.99. There’s also an official pop-up shop in Philadelphia that is operated by concession-stand company Aramark selling crosses, drink coozies and rosaries. The City of Baltimore has pope-branded sleeves for its transit farecards.

Hartman said that for certain companies, like Jeep, whose Wrangler is the official “Popemobile” in New York City, it makes sense to get in on the conversation. Same goes for Fiat USA, which is capitalizing on His Holiness’s decision to use its car to get around D.C. 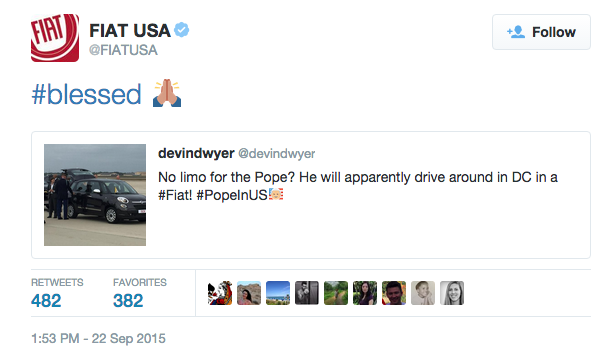 Online mattress company Saatva is another example. Papal reps ordered a Loom and Leaf eco-luxury foam mattress for the pope to prostrate himself upon on during his visit. News of that broke just as the company’s agency, Free Enterprise, was doing a commercial shoot.

“Since we were actually shooting bedroom interiors for Saatva at the time, it did not take long for us to realize we could capitalize on the news about the pope’s visit and the Saatva mattress he would be sleeping on,” said Blaine Lifton, CEO of Free Enterprise. But the agency didn’t want to depict the pope’s likeness: It ended up with creative that showed the pope’s hat on a nightstand, next to the Saatva bed. (It procured the hat from Abracadabra, a costume shop in New York’s Chelsea neighborhood, reportedly the last “pope’s hat” available in the city.)

Overall, big brands seem to be staying away from the Popeapalooza: Among the top 300 brands on Twitter, there aren’t a lot in the conversation. Instead, the action seems to be relegated to publishers, who are capitalizing on serious SEO gains with stories like The Street’s “7 pieces of investing advice from Pope Francis.”  The Philadelphia Inquirer, Daily News and Philly.com are publishing three commemorative “keepsake” sections — and their ad spaces: A full-page ad will run you about $10,000, while a logo on a special poster will cost you $20,000.

There’s already some backlash: One Catholic pizzeria owner in Philadelphia turned down a shipment of pizza boxes from his supplier featuring the Holy See because that’s not what the Church would want — and not everyone’s Catholic.

“Pope oversaturation is a serious problem,” said Hartman. “The stuff is spinning out of control.”

There’s also lots of digital action. A Snapchat filter is available for those currently in Washington, D.C., that shows the pope “Rollin’ in his Popemobile.” On Twitter, the hashtag #PopeinUS generates an emoji of the pontiff against the backdrop of the American flag. (As many observed, he looks like he’s wearing a yarmulke.) If you want to get city specific, #PopeinDC, #PopeinNYC and #PopeinPhilly also produce their own little icons.

But Twitter was beat to the punch by Aleteia, the global Catholic Network, which released a set of “PopeEmoji” as a special keyboard for mobile phones.

A data analysis by Brandwatch found that social chatter around the pope’s visit is peaking. There have been 183,000 mentions just in the last two days. Twitter is the top leader, with news sites and blogs second and third. But there’s serious hashtag confusion — Brandwatch found many, many other hashtags like #popefrancis, #popeishope being used.

There’s also #popeisdope, but we’ll let that one slide. As for @Pontifex himself — he has not used any hashtags, yet. He just wants your prayers. He could use them.

I ask you to join me in praying for my trip to Cuba and the United States. I need your prayers. — Pope Francis (@Pontifex) September 18, 2015