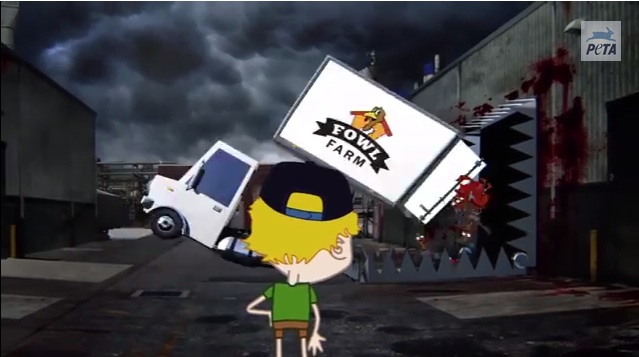 This Thanksgiving dinner, why not serve a heaping bowl of righteousness along with your bird? People for the Ethical Treatment of Animals has you covered – in blood, that is. Never one to shy from gratuitously controversial messaging, PETA is at it again with “Thanks! An Animated Trip to Holiday Slaughter.”

In the astonishingly gruesome clip, a blue-eyed blond-haired boy accidentally finds himself swept up with a batch of turkeys bound for industrial processing at the “Fowl Farm.” Pulled onto a conveyor belt, the boy goes through the same horrific disassembly line the turkeys do: their beaks are sliced off; the boy loses his nose. Then he’s drugged, fattened up, electrocuted and dunked in a vat of boiling oil. Pass the stuffing.

The boy’s story has a happy ending, however. He is saved by a turkey pal, albeit it’s unclear how he survived the ordeal in the first place. Your Thanksgiving turkey, presumably, will not be so lucky. “Give turkeys something to be thankful for,” says the tagline. “Go Vegan!”

PETA’s shockvertising is, well, an acquired taste. It is usually quite good at getting PETA itself attention, but whether such hectoring is the best approach to converting carnivores is unclear.

Of course, subtlety has never been PETA’s strong suit. Take, for example, the time it ran an ad that insisted going vegan will “increase your sexual stamina” – and endow dudes with bigger, firmer, uh, cucumbers.

The animal rights group also once claimed that eating poultry while pregnant can lead to birth defects – like a smaller penis. But PETA’s not just obsessed with man-junk. Check out this super-porny “outtake” from the banned “Veggie Love” Super Bowl spot casting couch. Nice tomatoes indeed.

Speaking of smut, actress Pamela Anderson has appeared mostly naked in a string of sexy, sexy PETA ads, like this one claiming that all animals have the same parts.

Any allusion to animal cruelty is implied at best but the spokeswoman, whose own healthy lifestyle landed her with hepatitis C (cheap shot, maybe, but all’s fair with PETA apparently), sure brought PETA some headlines.

It’s hardly news that sex sells, but what about fat shaming? Go vegetarian, PETA exhorts, so you don’t look like a “whale” at the beach.

So maybe we should be grateful for “An Animated Trip to Holiday Slaughter” since it sticks to the actual relevant and very real issue of animal cruelty in industrial farming — and avoids comparing meat eating to a crime on par with the Holocaust.