Perhaps nothing can save the beleaguered Obamacare rollout, but two advocacy groups are giving it a try by enlisting keg-standing bros, friends with benefits and cardboard cutouts of Ryan Gosling.

Alas, this isn’t an Obama administration effort. It’s a low-budget online campaign co-created by the Colorado Consumer Health Initiative  and Progress Now Colorado, both liberal advocacy groups. The campaign received no funding from the federal government or the state of Colorado, said Adam Fox, director of strategic engagement at the CCHI.

You would be excused for wondering what frat boys and “hey, girl” memes have to do with the most significant regulatory overhaul of the U.S. healthcare system since the passage of Medicare and Medicaid in 1965. Typically, not much. But this exact imagery is being used in a “got insurance?” advertising campaign aimed at educating America’s young people about the benefits of the Affordable Care Act.

Despite costing only $5,000 and running exclusively online, according to Fox, the campaign has been covered by numerous national publications. That was money spent on promoted Facebook and Twitter posts. The whole campaign can be seen on the “got insurance?” website and its corresponding Pinterest and Tumblr pages. These promoted posts certainly got the attention of the media, with dozens of news organizations writing about the campaign.

Some have scoffed at the campaign’s unrefined pitch to provide a new federal health insurance option to Americans who don’t have coverage. Indeed, with a shoestring budget, the groups didn’t even hire an ad agency to craft the campaign.

“We saw a huge reaction yesterday,” Fox said. “There’s been a lot of positive feedback, and there’s been tons of sharing on social media,” he said. “But there’s been some negative reaction as well.”

The ad that has, perhaps predictably, received the most criticism from the political right is a photo in which a woman is eager to have sex with a man after using her health insurance to obtain birth control. 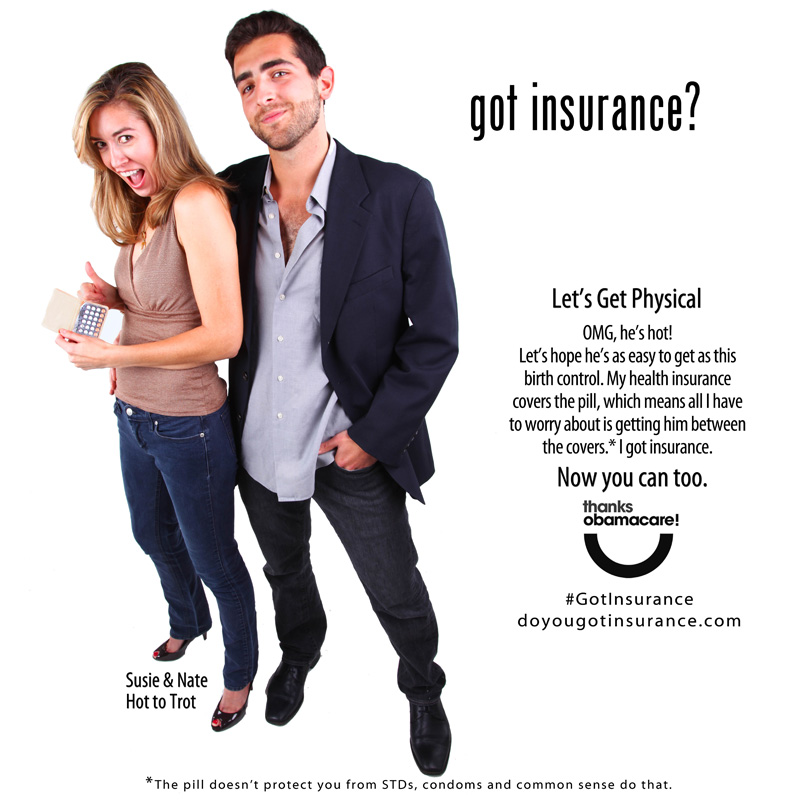 Fox News claimed the ad was degrading to women. Adam Fox of the CCHI said he anticipated the mixed reaction but was happy to get people talking about the Affordable Care Act despite some negative comments.

“At my age, I’m offended by it,” said Patsy Cisneros, political strategist at image consulting firm Corporate Icon/Political Icon. “But it’s not for me,” she said. “It will turn off a lot of people who need to be in the market, but ultimately they’re focusing on the younger crowd, and they’ll think it’s cool.”

Regardless of one’s political affiliation, it’s hard to argue that the implementation of the Affordable Care Act has been anything other than an unmitigated disaster. The launch of the Healthcare.gov website has been so terrible that President Obama called his senior staff members into his office two weeks after its glitch-riddled launch for a thorough chewing out.

The Department of Health and Human Services declined to comment about the ads. But, ironically, while the government has proven unable to create a functioning website for Obamacare, these small special interest groups have shown an intuitive understanding of how to use the Internet to market Obamacare – Ryan Gosling and all.

“We thought it would receive some national attention,” Fox said. “We were obviously hoping it would go as big as possible. I think we’ve succeeded.”