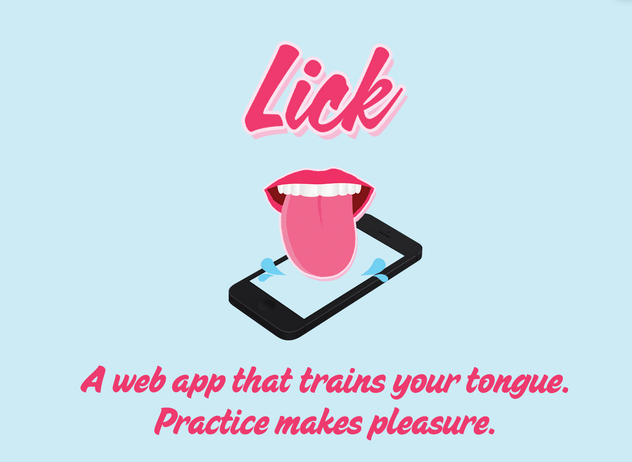 Forget about Fitbit or Nike Fuel band, there’s a new fitness app if you want to get in shape. But it’s not the kind of getting in shape you do at the gym.

The Lick This app is designed to get your tongue in shape for, um, whatever it is you may be using your tongue for (hint: the tagline is “Practice makes pleasure”).  All you have to do is go to lickthisapp.com from your iPhone and follow the instructions — which include wrapping your phone in plastic wrap so you don’t lick all those germs off of your touchscreen. Exercises include using your tongue to simulate bouncing a beach ball or using your tongue to crank a pencil sharpening. 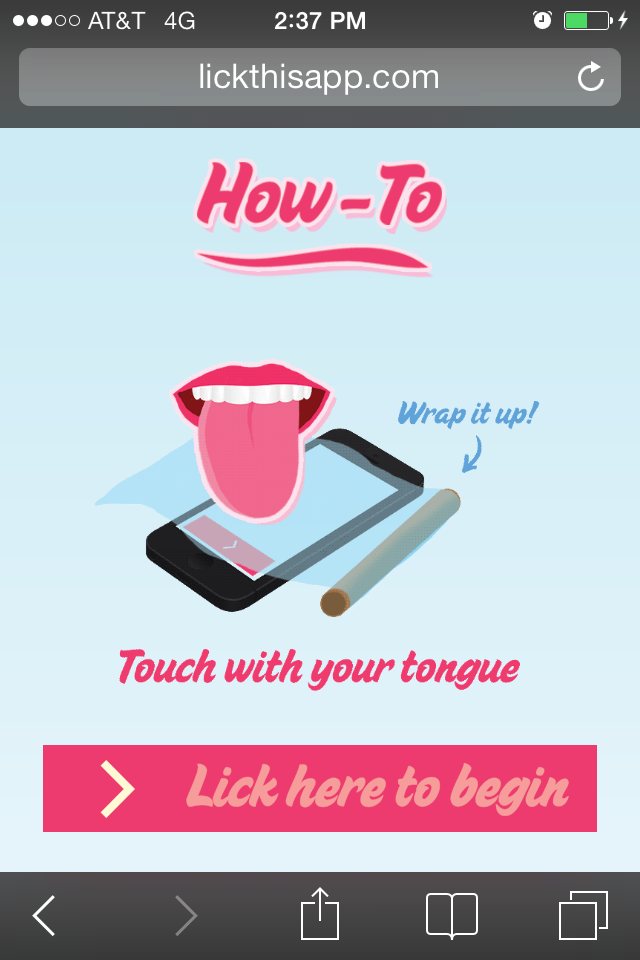 This sexy app is a fun side project from two dudes at Goodby, Silverstein & Partners, Chris Allick, lead creative technologist, and Pablo Rochat, art director — with the help of copywriter Justin Ralph. Allick and Rochat have been working together at Goodby for about a year now on client work and also a host of fun side projects — including a Chrome extension “H.O.V.A State,” which lets you browse the Web like Jay-Z, and a “Booby Trap” site, which is full of boobs that follow your mouse. You can find all of their projects at clubsexytime.com.

Allick and Rochat took time to chat with Digiday about helping people open up about sex and why having side projects is so important as an agency creative. Some excerpts:

How did you guys come up with the idea for Lick This?
Allick: We wanted to make a game but had no idea what, so we were joking around about doing something that involved holding your nose the the phone, which we did and actually ended up hitting random stuff. So from there, the idea evolved to using the tongue — we tried our tongue and it worked.

What exactly is Lick This app meant to do…?
Rochat: The game itself is pretty elementary and basic, but just using your tongue makes your mind wander in a dirty direction. We didn’t need to go to far with how we presented it — we let people use their imagination to take sharpening a pencil and making it a sexual activity. We don’t push you there; it depends on how far your mind goes with that.
Allick: First, it was going to be the “Lick Olympics,” but it was important for it not to be objectifying. We don’t want to tell you how to live your life, but we do want people to be more open about how they talk bout their sexual lives. We thought this would be a fun way to get people talking about oral sex.

Do you think having side projects is important?
Allick: Side projects are 100 percent important to sustain creativity. I’m suspicious of creatives who don’t have side projects — like how do you not do other stuff besides client work? You need to have free range to let your mind wander. I don’t know how you grow or learn as a person without that.

Why is the site for all of your projects called Club Sexy Time?
Allick: I started the site five years ago when I moved to New York. A couple of my friends are really smooth guys, so I wanted to start a club where they helped other people find sexy connections and sexy moments. It works! We’ve helped people do everything from just hooking up to actually dating. But now, it’s really just a hub for our projects. And with Lick This, we are still helping people find sexy moments.

What’s the best part of working in advertising?
Allick: The most exciting part of agency world is meeting people who want to make stuff and being exposed to really cool problems that have seemingly infinite solutions and being tasked with coming up with just one that will convey the client’s message perfectly and, in a way, I’m also proud of. Also, there are $.25 beers in our office and a foosball table.

What’s the worst?
Rochat: When clients don’t want to leave their comfort zone.