Where mobile commerce is going in 2016

The 2015 holiday shopping season was a clear indication: Mobile commerce isn’t slowing down.

“It was a fantastic season for mobile purchasing and mobile giving,” said Matt Asay, vp of mobile at Adobe Marketing Cloud, “despite the fact that buying on the smartphone in particular causes a lot of stress.”

Customers, according to Asay, are ahead of retailers in that sense. They know what they want from the smartphone shopping experience, but retailers have yet to catch up to provide it. Conversion is still the biggest problem for mobile commerce, as mobile checkout remains a major pain.

Fresh off the holidays, here’s how retailers are gearing up for a mobile-heavy 2016. 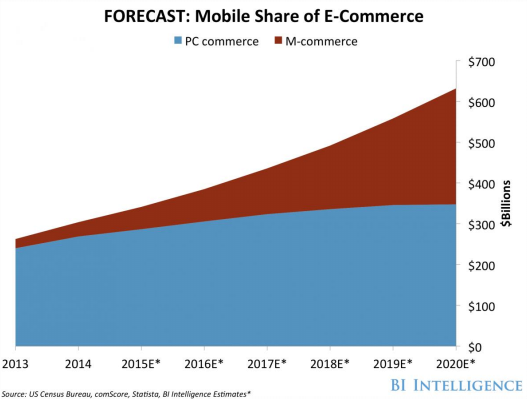 “This year, the increase in mobile commerce will be driven by a few things,” said Jaime Toplin, a research associate with BI Intelligence. “Millennials use their phones as their primary device, and as they make more, they’ll spend more. And on the retailers’ end, they are going to create more opportunities for people to buy.”

For retailers, the money is in the mobile Web, not the app.
Google searches, email newsletters and social media promotions all lead shoppers to the same place: their mobile browsers. Only the leaders with the biggest reach, like Target, Amazon and Walmart, have been able to get enough regular usage on their mobile apps in order to outpace their traffic and purchases on the mobile Web, according to a study by Moovweb, a mobile optimization platform.

“‘Whatever makes sense for Amazon’ isn’t an industry strategy,” said Moovweb’s founder and CEO Ajay Kapur. “Everyone else really needs to focus on mobile Web over mobile apps. Retailers like to think that people will want their app icon on their home screens, but that’s not really the case.”

Still, 2015 saw plenty of retailers climbing into the app store for the first time. Everlane, Alex and Ani, and BaubleBar all released their mobile apps last year. In 2016, retailers won’t be abandoning their apps (they weren’t easy to make, after all), but they should be finessing them to be a go-to source of perks and benefits for the brand’s most loyal consumers.

So, optimized mobile checkout will be a top priority.
BI Intelligence found that while mobile commerce is on the rise, its conversion rates are still behind desktop’s. That’s because, thanks to a smaller screen, harder-to-find product details and finicky credit card form fields, it’s easy for shoppers to give up on a purchase. 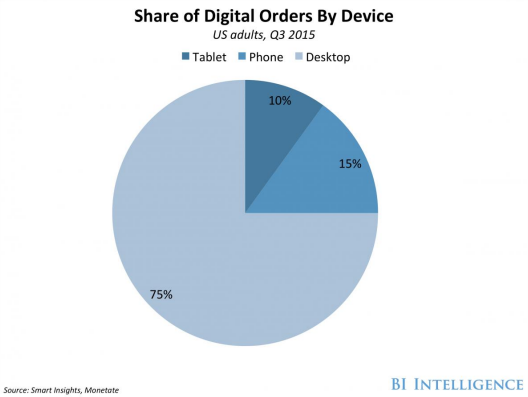 Toplin said that in 2016, an increasing percentage of retailers will incorporate seamless payment services, like Apple Pay, into their mobile Web checkout pages. Moovweb’s Kapur said that quick fixes for clunky checkout pages include fewer form fields and a cleaner user experience.

“People have a bad checkout experience once, and they remember that poor experience,” said Kapur. “A very small fix, like eliminating a redundant entry field, gets results.”

Physical stores will support the mobile surge.
The beacon is a battered, former retail industry darling. “People have been talking about beacons for years and no one has done anything with them,” said Asay.

That doesn’t mean the technology itself is dead. According to Asay, it’s going to move away from app-based push notifications to an information hub. That can work both on the consumer and retailer side: A consumer can easily pull up product reviews and details based on where they’re standing in the store, and the retailer can understand how people move through their brick-and-mortars.

“We’re in a period of time where location and analytics has become a big deal when it comes to understanding what users are doing,” said Ravi Shah, product director for IBM Commerce’s mobile solutions. “Retailers are looking to location data to learn about users. As we move into 2016, we’re seeing a greater level of sophistication — and not just among the early adopters.”