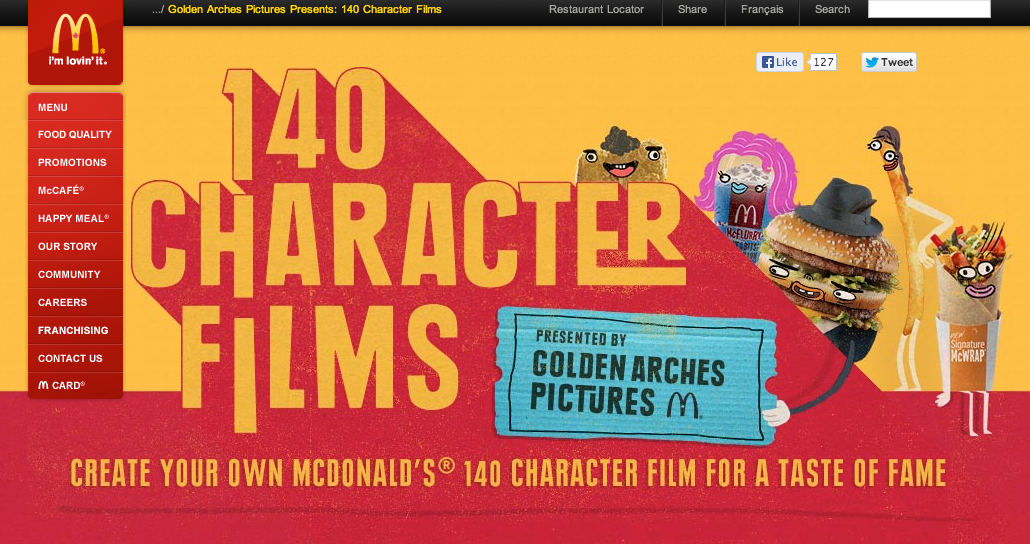 You have 140 characters to come up with a story about Chicken McNuggets and a Big Mac: Go!

That’s the premise behind the new “140 Characters Films” from McDonald’s Canada. The fast food brand, with the help of agency Tribal Worldwide in Toronto, is asking fans to pitch short film ideas on Twitter @McD_Canada using the hashtag #MakeMyFilm or through the “140 Characters Films” site. McDonald’s will choose 12 of the best ideas to make into animated digital shorts, and prizes include include private movie screenings, movie passes and movie-theater gift cards.

Storylines must include at least one of McDonald’s “cast” of food-item characters: McNuggets, French Fries, Big Mac, McFlurry and McWrap. For example, @mrjordancohen tweeted this story line: “Mcflurry is an ex-marine who teaches English to inner-city Chicken Mcnuggets but in the end McNuggets teach McFlurry. #MakeMyFilm.”

Obviously, it’s pretty silly, but the length restrictions and absurdity of chicken-nugget characters could potentially make things fun. It’s like an exercise in absurdist micro-stories.