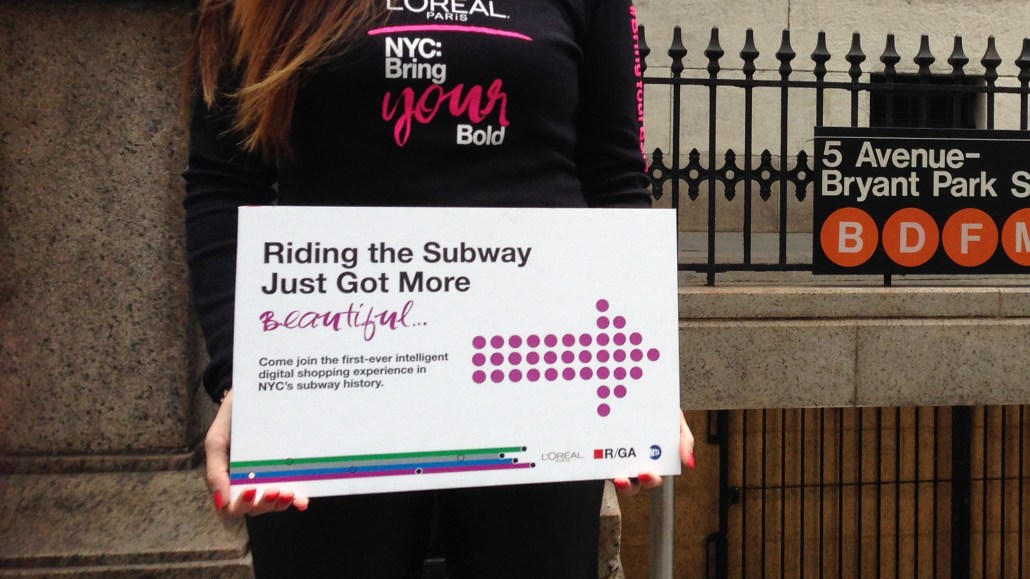 It can boggle the mind how often a company will invite hordes of reporters to a press event and then drastically underestimate the amount of Wi-Fi bandwidth needed to service them all. But L’Oreal gets a pass for having no Internet connection at the press conference it threw Wednesday morning. Instead of renting out space in a glamorous Midtown hotel you’d expect from an image-oriented cosmetic company, L’Oreal opted for the grit of a New York City subway platform.

But in this case it makes sense. L’Oreal, with the help of digital agency R/GA, is installing a makeup vending machine above the 7 line at the Bryant Park subway station, the company said. The machine, which uses color recognition technology to help women choose makeup that matches or clashes with what they’re wearing, will be available for public use from Monday, Nov. 4, through Dec. 30. Perfect for upping your flirting-with-strangers game.

Digiday, however, was given a sneak peek.

Fasion model Coco Rocha — whom R/GA’s group executive creative director Erin Lynch called a “New York City ‘it girl'” — demonstrated how the kiosk works. Rocha stood in front of a large screen which recognized three of the colors she was wearing. A second screen allowed her to choose one of the colors and “Match It” or “Clash It” with a certain nail polish, eye shadow or lipstick color. Customers can then tap on the products they want to buy and pay with a credit card. The products are retrievable from the bottom of the kiosk, just like a candy bar or soda can would be dispensed at a vending machine. Brand ambassadors will be on hand for the first two weeks to help customers use the kiosks, L’Oreal spokeswoman Lisa Capparelli said.

L’Oreal bought the kiosk placement from CBS Outdoor, the firm that handles the city’s subway advertising, according to Paul Fleuranges, senior director of corporate communications at the Metropolitan Transportation Authority (MTA).

And if you’re more of a downtown gal? Fleuranges hinted that there may be more installations like this in future.

“This is a pilot project,” he said. “We’re trying to see if there’s an appetite for this.”