Swipe right: A Tinder for marketers 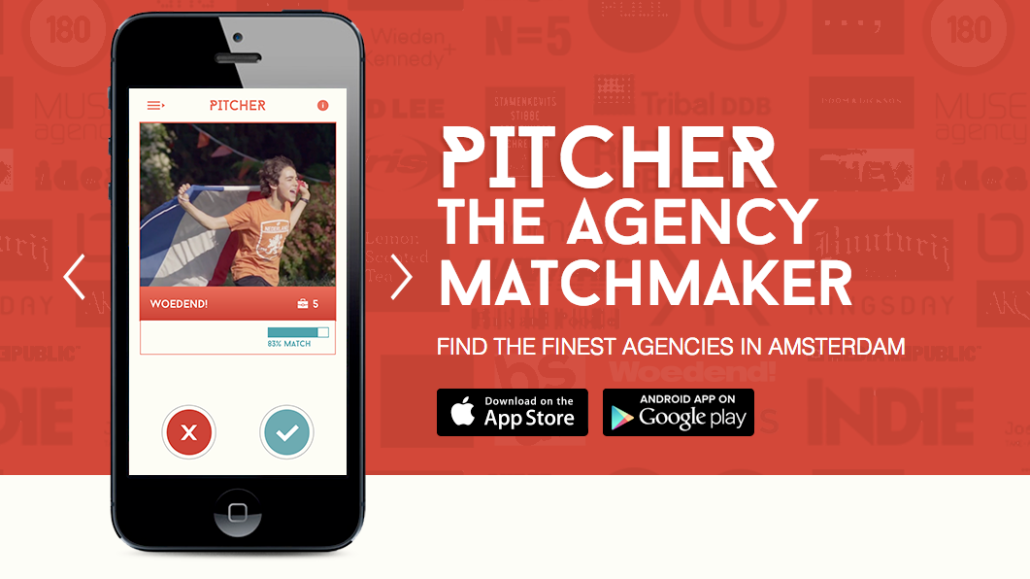 Dating is a drag. Trying to find that perfect match in a sea of losers. Endless first dates that go nowhere. Potential partners who vanish without a warning. When you think about it, it’s kind of like … looking for a new agency: Reviews slog on endlessly. They’re expensive. And often, one side spends expends significant effort on the process only to find that it’s been abruptly dropped for a better option.

Pitcher, an app that touts itself as a “Tinder for marketers,” is here to disrupt that process. Developed by a creative duo from Amsterdam ad agency Woedend!, the app, available on iOS and Android, features a list of 80 of Amsterdam’s “best” shops, as determined by the Amsterdam Ad Blog.

“Instead of whining and complaining about the pitch situation in Holland, where clients are just asking for pitches instead of doing research into the which agencies are good, we decided to do something about it,” said creative director Merien Kunst.

Here’s how it works: brands set up a pitch, complete with title, a brand category, a campaign type and the number of agencies they want. They can set a “pitch fee” per agency. Then, the app searches a database of about 80 shops from the Amsterdam Ad Blog, and spits out anywhere between three and five agencies to choose from. Kunst said that the app looks at types of media the agency has worked with and the categories it has experience in to show you the most relevant shops.

Clients can click on the matches to get a short description of the agency and see some of the work it’s done. As with Tinder, brands can swipe left if they want to move on, and right to add a given agency to a shortlist. Then, clients can ask the agency to contact them directly, or call or email them themselves.

When this reporter tried it, the first agency that was shown was Woedend! itself — a coincidence, said co-creator Paul van Uden, who added that Woedend! isn’t the first match for every brand, as it “wouldn’t be right.” Still, the possibility of that outcome makes this as much an ad for the shop as anything else.

Van Uden said in that in the first day, the app was downloaded 200 times from the Apple App store. They don’t know how many pitches have been entered. “We don’t track the data,” he said. “We want to keep it private and we don’t check it because it would give us an edge.”