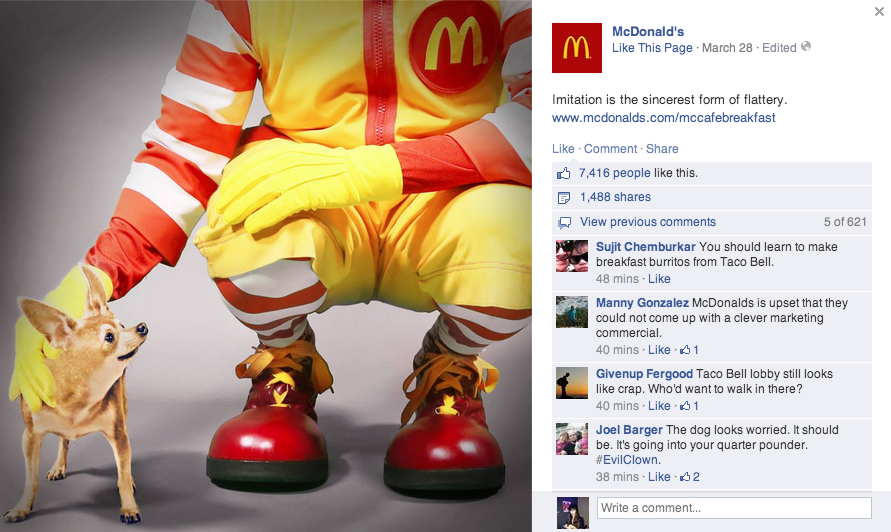 Everyone loves some good, old fashioned brand rivalry. That’s why it’s no surprise that the little back and forth between Taco Bell and McDonald’s has now turned into “The Breakfast Wars” — and has gone viral.

Last Thursday morning, Taco Bell unveiled its new breakfast menu, which, as Taco Bell CMO Chris Brandt explained to Digiday, was about seven years in the making. Along with fun marketing stunts leading up to the breakfast launch, like its burner phone campaign, Taco Bell couldn’t resist creating even more buzz for itself by taking a jab at McDonald’s — the No. 1 fast food brand, according to the QSR 50, and the reigning fast food breakfast destination with about 25 percent of the fast food breakfast market share.

In many ways, this is a bizarre age of brand-on-brand social media action — look no further than this year’s Super Bowl, when brands spent most of the evening interacting with each other on Twitter in the hopes of getting consumers’ attention. Naturally, McDonald’s couldn’t just let this potential marketing moment pass by without coming up with the right social media response.

The day after Taco Bell released its Ronald McDonald ads, McDonald’s took to Facebook to post its comeback: an image of McDonald’s mascot Ronald McDonald crouching down and petting a chihuahua — a reference to the old Taco Bell mascot — along with the copy, “Imitation is the sincerest form of flattery,” and a link to the McDonald’s breakfast menu.

The quick and cheeky Facebook response from McDonald’s has gotten more than 7,370 likes, more than 1,450 shares and more than 600 comments. As to be expected with big brand social media posts, there are, of course, a handful of trolls and negative commenters mixed in with those praising McDonald’s for its retort: 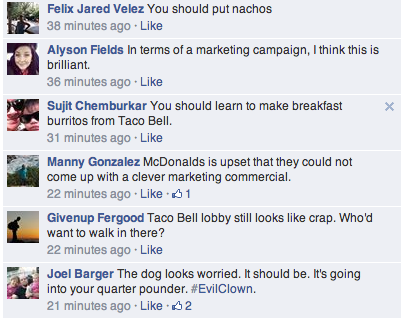 McDonald’s has also started running its own breakfast promotion, offering free coffee during breakfast hours until April 13. Facebook posts about this promotion have gotten even more engagement than its response to Taco Bell. For example, a Facebook post about the breakfast coffee promotion on March 30 got more than 66,300 likes and more than 6,350 shares.

Both brands have benefited from this so-called “breakfast war.” According to Topsy, Taco Bell experienced a big spike in Twitter mentions the day of its breakfast menu launch (March 27) and its “Ronald McDonald” ads. And McDonald’s saw a bit of a bump following its comeback post (March 28.)

Fast food brands aren’t the only ones entering into marketing spats. Ford is enjoying a bit of buzz for its new ad in response to a Cadillac spot about American work ethic. But the real question is if these kinds of brand fights actually help brands in the long run beyond the ephemeral viral buzz.

“Brand fights are like train wrecks — you can’t look away, but the end result is rarely positive,” said Drew Nessier, CEO of social agency Renegade. “In the case of Taco Bell and McDonald’s battling it out, it seems like a waste of time since both are so well-established and well liked by their core audiences —  also, I found the Taco Bell ‘my name is Ronald McDonald’ ad amusing, but a day later I just remembered McDonald’s and not Taco Bell.”