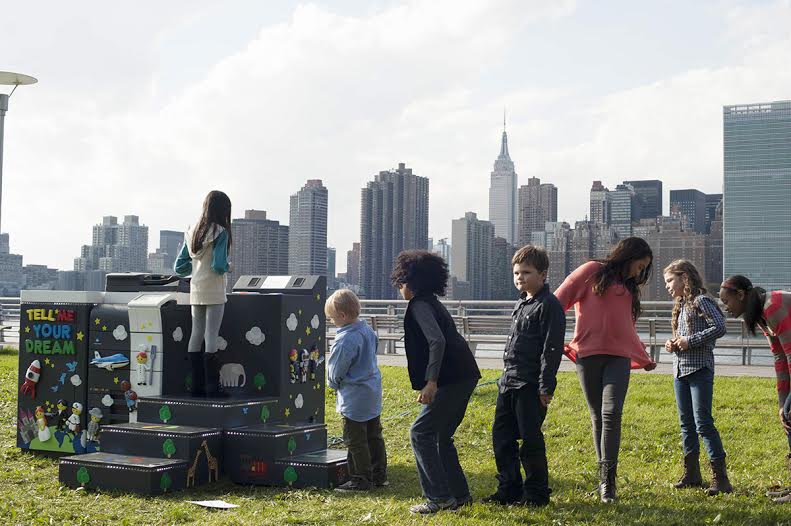 Future police officers, game designers, and princesses are “printed” out on paper for this quirky Konica Minolta campaign that wants to make children’s dreams a reality.

Printer brand Konica Minolta’s low-tech Dream Printer invites children to write out their dreams on a sheet of paper and then feed them into its paper tray. An artist inside of the printer, who can see what the child looks like via a small camera on the outside, then draws a caricature of the child in his or her future dream occupation. Once completed, the artist feeds the paper back out of the machine to the delight of a small child.

“Konica Minolta wanted to encourage children by showing them that the more you imagine, the more your dreams take shape, said Takenori Hashimoto, a copywriter at Ogilvy&Mather, Japan. “Children dream about what they want to be when they grow up, but they eventually lose sight of those dreams.”

The idea for the printer was thought up by Hashimoto while reading about Ichiro Suzuki, the Japanese-born Yankees outfielder. Suzuki, according to Hashimoto, had a clear vision of his future, and mapped out a plan for his success. This type of diligence and imagination, as well as the utilization of its printing technology, is what Konica Minolta wants to encourage in children. It’s also the most literal expression of its “Giving Shape to Ideas” projects. In another campaign, “The Wishing Star Planetarium,” Konica Minolta asked its Facebook fans to tell the company their wishes. The company chose a couple that had wished for a wedding redo with fireworks and a starry sky, since the night sky at their first wedding was obstructed by a storm, and reserved a planetarium where the couple could have their wish granted using the large planetarium projector. Again, Konica Minolta was aiming to ‘give shape’ to the winning idea.

The campaign, which has received more than 6,000 likes on Facebook, had about 30 children attend its event early last month in New York City. Konica Minolta is going to recreate the live event in Shinjyuku, Japan at the Konica Minolta Plaza on Dec. 14. We can’t wait to see how many kids want to be Digiday readers when they grow up.