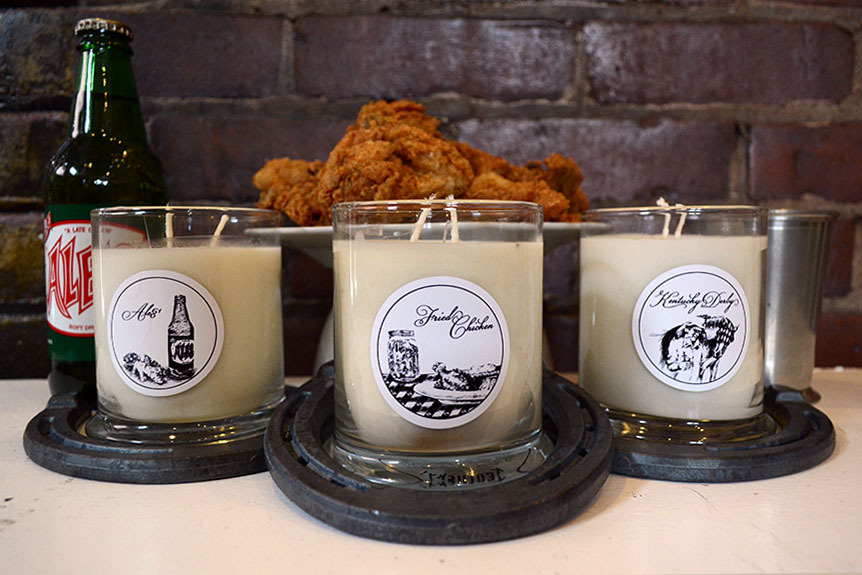 Move over bacon-scented candles. There’s some hip new wax in town, and it hails from good old Kentucky.

The creative guys behind Kentucky for Kentucky — an initiative to encourage tourism by rebranding Kentucky with campaigns like “Kentucky Kicks Ass” — have come out with “Scents of the Commonwealth,” a line of candles that emit the best scents of Kentucky, like Ale-8-One, fried chicken and Derby Day mint juleps.

As Whit Hiler, one of the founders of Kentucky for Kentucky who also works at Kentucky-based agency Cornett, explained, the scents are all inspired by things that were “invented” in Kentucky. (For those of you who aren’t familiar with it, Ale-8 soda is apparently Kentucky’s official “soft drink.”)

So far, the most popular scent by far has been the fried chicken, the first batch of which sold out in under a minute. There will be more candles available for sale on Kentucky for Kentucky’s site throughout the holidays and beyond, and according to Hiler, more scents will come out in the future, like Kentucky River or Hunter S. Thompson’s ashtray.

“We’d love to figure out what Abe Lincoln’s beard smelled like; that would be another mega hit,” said Hiler.

Between off-beat, hipster-tinged Kentucky for Kentucky and cheeky tourism campaigns like #sharethelex — which touted Kentucky’s offerings like great bourbon, bluegrass  and bearded dudes on bikes — Kentucky is just one New York Times trend piece away from really establishing itself as a brand, right up there with Brooklyn.

Hiler estimates that these candles will likely increase Kentucky tourism by roughly 203 percent — in the meantime, they make good gifts.