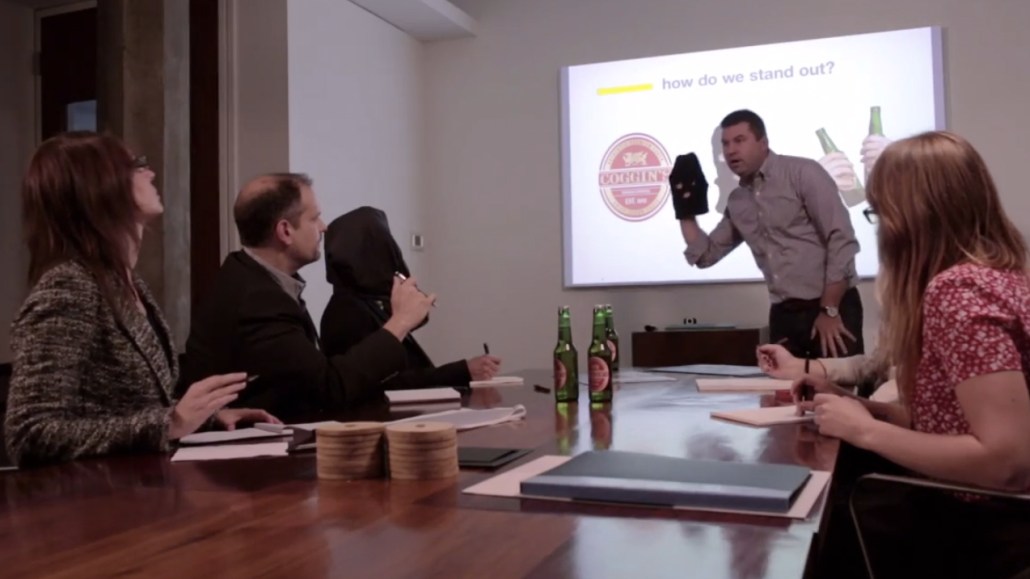 The agency behind the satirical Catvertising and Buyral viral videos has a new acerbic hit on its hands. This time, with its new parody video, “ExFEARiential,” Toronto-based John St. turns its attention toward the experiential brand marketing trend.

The clip references real ads, like the LG spot that terrified unsuspecting job applicants, alongside mock experiential campaigns: a home break-in-cum-beer ad, a kidnapping-turned-deodorant commercial. While gently mocking an industry trend, the video is also a savvy bit of advertising for John St. itself. Since being posted on YouTube two days ago, the video has amassed more than 36,000 views.

Digiday caught up with Angus Tucker, an executive creative brain behind the project, who weighed in on industry trends, how the agency views its darkly funny productions, and his city’s crack smoking mayor. Excerpts:

How did you come up with the exFEARiential video?
We like to poke fun at trends that we see are happening in advertising. With so many of these experiential events done by clients, they just seem to be going further and further and further. We just thought that it’d be funny if we took it really far. But with these things, we just want to touch on relevant trends happening within the industry and speak to other marketers and advertisers.

You actually reference real campaigns in the latest video.
We didn’t do the campaigns — one was the LG spot, one was for the Pepsi Max — and then there was the Carrie stunt, which I thought was really great, was really cool. We put those in there because they helped speak to the overall trend we poked fun at. What if the guy in the car during Pepsi Max actually did have a heart attack? In a way I’m waiting for it to happen. I think it’s Murphy’s Law; it’s gotta happen at some point.

Why don’t you have this type of voice on your Twitter or Facebook?
Our brand personality isn’t sarcastic or dark humor. We definitely have a sense of fun, and we don’t take ourselves or the business completely seriously all the time. We like doing these things, and it’s how we define ourselves. A few years ago, by accident with the “Pink Ponies” video, we were like, “Oh, hey, we’re actually advertising ourselves.” It seemed to be a good way for clients to look at us and be aware of our name and who we are and go on our website. Some people think it’s disgraceful that an ad agency is doing this work, and the other half is saying, you do know this is a joke, right? There’s a formula to these things, and the formula is that people have to be on the fence and question, “Is this true?”

Are you doing anything about Rob Ford?
That’s too easy a topic. I couldn’t beat any of the videos that are surfacing. His videos are way better than ours. How can you compete with smoking crack? That’s your headline right there. “John St. Parody Videos Second Best to Rob Ford Smoking Crack.”

Watch the ExFEARiential video below: