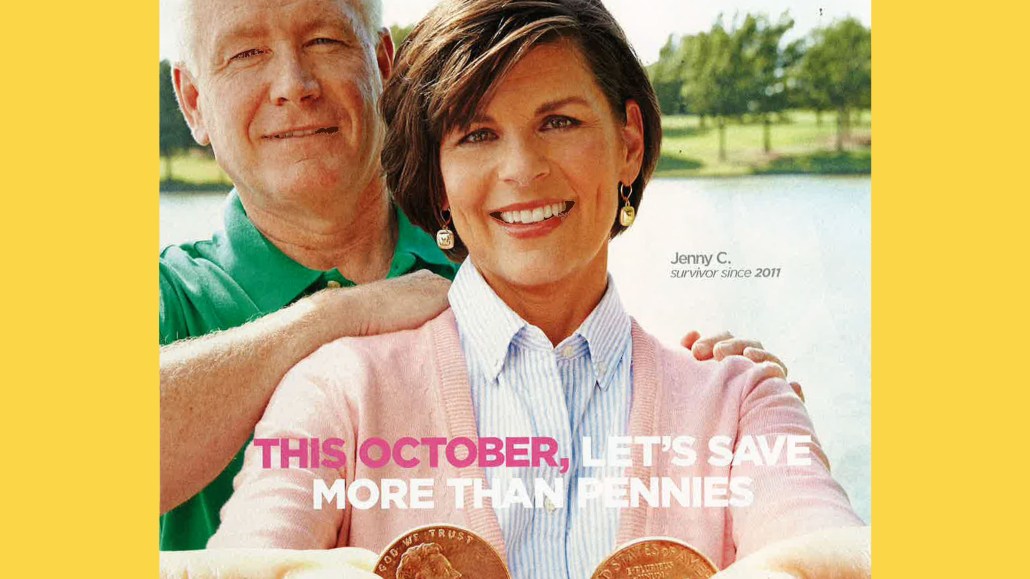 Joanna Franchini is part of the Cultural Insight practice at Added Value, a strategic marketing consultancy in New York City.

Someone please save JCPenney from itself: the company’s latest ad campaign, rolled out in October for Breast Cancer Awareness month, is a painful mess of mixed brand messaging, inadvertent sexism and cultural tone-deafness. Here is the ad as it appeared in People magazine.

The ad is part of a larger campaign with mobile, social, in-store activations and more, called “Give Breast Cancer the Boot.” But it invites more questions than it answers. At first glance (the only glance you get), this reads like an ad for erectile dysfunction or retirement planning. Nothing as serious as going for an annual mammogram to determine whether or not you have a malignant mass.

It’s easy to imagine this couple shopping at JCPenney. But who is the patrician-looking man, and why is he leering behind this smiling, middle-aged woman? More perplexing, whose fingers are those in the foreground, exactly?

The worst aspect of the ad, of course, is the wink-wink positioning of shiny pennies where the woman’s breasts should be, along with the line, “let’s save more than just pennies.” Yikes. The long hierarchy of people who approved this ad believed it was cool or clever to conflate pennies and breasts, making light of the nightmares of breast screening, lumpectomy, mastectomy and breast reconstruction. Very uncool and way, way out of touch.

There is radical dissonance when JCPenney, a milquetoast mom brand struggling to find its way, makes a suggestive visual pun out of every woman’s worst fear in what appears to be a Cialis ad. The retailer enjoyed some surprise inadvertent success with its real-time Super Bowl tweets this year. But this campaign is so far off-brand that it actually doesn’t compute.

Maybe this visual pun could be successfully executed by a brand with a more rebellious side to its personality – say Diesel, where playful flouting of social acceptability is in keeping with the brand’s character. Or imagine it coming from Victoria’s Secret, where you can conceive that a little sly jokiness about its stock-in-trade might bring a welcome levity to a brand that tends to traffic in a voluptuous seriousness.

Unfortunately, the message it sends about the JCPenney brand is confusing at best, offensive at worst. The brand’s aligning itself with an altruistic endeavor and encouraging its customers to act on behalf of that greater good is laudable, in theory. Regrettably, while the campaign’s heart might be in the right place, the location of its head is highly suspect.

It can be conceded that pennies as a stand-in for breasts grab your attention. Dig a little deeper, however, and the message becomes quickly troubling. Breasts: they’re worth saving. The cringe-worthy synecdoche — breasts as the shorthand for women as people — paired with the shoulder-gripping man in the background — makes the subtext decidedly retrograde.

No one expects JCPenney to be a champion of feminism, but this ads puts JCPenney in further danger of cementing its identity as a brand with relevance for no one. When even decidedly mainstream brands like Always, with its “Like a Girl” campaign, and Pantene, with “Labels Against Women,” are reflecting a more progressive conception of what it means to be a woman, it’s abundantly clear the cultural conversation has shifted.

JCPenney has wasted a lot of money here, plus the opportunity to show women it really cares about the most common cancer afflicting them: over 220,000 women will be diagnosed this year with breast cancer, and over 40,000 will lose their lives. If only the money for JCPenney’s creative and media buying (which clearly amounts to more than pennies) could have been donated directly to research for the cure.