Yesterday, Ahmed Mohamed wasn’t a well-known name. Fast forward to today and two of the most power people on earth are sending him messages online showing their support.

Mohamed is the 14-year-old Texas teen who showed up to his high school Monday with a homemade clock that he’d built. An English teacher reportedly mistook as a bomb and had him arrested, igniting a firestorm of criticism from the Internet accusing the school and authorities of racism towards Mohamed.

Police dropped their charges against the teen, but the Internet is still outraged over the implications this could have on Muslim kids wanting to move into the science and engineering field.

It didn’t take long for the hashtag #IStandWithAhmed to permeate throughout the Internet, most notably on Twitter where the social network says sparked 370,000 tweets — and growing.

One of those tweets came from President Barack Obama, that racked up 120,000 retweets in its first hour:

Cool clock, Ahmed. Want to bring it to the White House? We should inspire more kids like you to like science. It’s what makes America great.

Facebook CEO Mark Zuckerberg displayed his solidarity, writing on his social network that he should be applauded and not arrested: 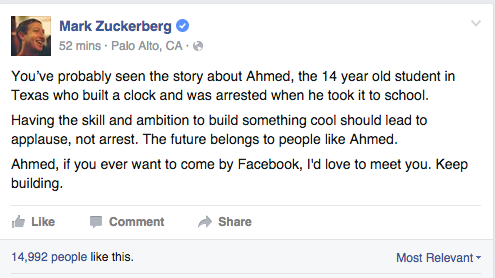 The show of support didn’t stop there, either. Democratic presidential hopeful Hillary Clinton tweeted that the teen should “stay curious” and NASA’s “Mohawk Guy,” a.k.a. Bobak Ferdowsi, chimed in:

I can’t imagine if be working @nasa today if anything like this had ever happened to me. https://t.co/OajWwPXchB #IStandWithAhmed

Perhaps Ferdowsi could finally get NASA to tweet their support, since the teen was wearing a NASA t-shirt when he was arrested:

Dear @NASA .. He was wearing your T-Shirt, dreaming to be an astronaut. You SHOULD stand with him. #IStandWithAhmed pic.twitter.com/XVNZp9HWqx — مروان المريسي (@almuraisy) September 16, 2015