In April 2014, I was asked by an editor at Vice to create ads for a video project to be called “The Protest Show,” starring Josh “The Fat Jew” Ostrovsky.

The concept was: Ostrovsky would be filmed “protesting” stupid, petty issues and situations.

The Internet personality catapulted himself into a niche level of micro-stardom by stealing jokes and memes created from others and posting them on Instagram and Twitter. Ostrovsky has more recently made headlines for being something of a joke thief.

As it happens, I had lunch with Ostrovsky, his agent and the editor in Williamsburg. The first thing Ostrovsky said to/about me was, “Who’s the angry old guy?” I held my tongue. We had a briefing and “brainstorming” session. One of the “protest” ideas agreed upon was to try to get Apple to fix the iPhone texting “bug” that autocorrected “Yo” to “To.” Another one involved doing something outside of a Manhattan Starbucks, the details of which are deeply buried in my old slow brain. But you get the gist.

During the lunch, Ostrovsky mentioned, seemingly seriously, that he shoved paper towels up his crack on hot days to absorb ass sweat. He said Brawny towels sucked because they fell apart easily. I told everybody that I thought that would be a great idea for a protest.

Lunch over, I said I’d have rough (very rough) concepts for the show in a week. These are those ideas. Some of the photos of Ostrovsky used here were not used in the original presentation (they weren’t online at the time), but the basic concepts weren’t altered. As you can see, I don’t know Photoshop or really have any design skills. I’m just an “idea man” like Norville Barnes in “The Hudsucker Proxy.”

This is the “incident” that spurred the idea for the show. Ostrovsky picketed outside of Instagram’s New York City office because they kicked him off its service for “no reason.”

An alternate headline was: “The Only Thing He Has In Common With Occupy Wall Street Is The Smell.”

I avoid puns, except when I don’t. One of the things The Fat Jew is “famous” for is sitting in big vats of food. 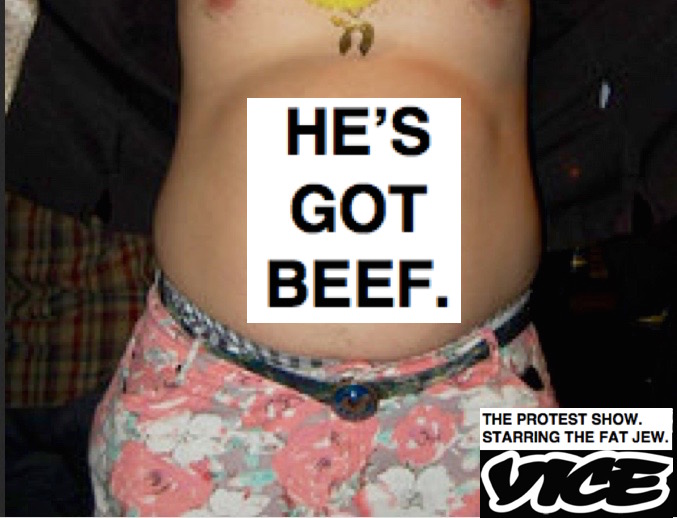 His stomach is a canvas.

Last November, The Fat Jew ran for “President of the Internet (here’s his promo video in which he promises Rob Lowe he will “take him soft in his mouth” if the actor backs him). 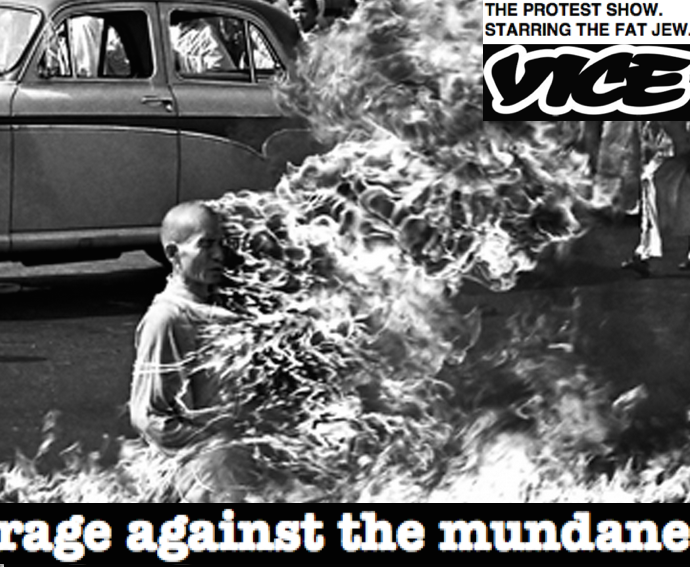 OK, the idea here was that TFJ would be on fire, but with trick magician fire, or something.

The editor told me he “loved” the ideas. TFJ didn’t respond. Eventually, I was told the ad campaign was “on hold.” Then, the show was shelved.

I did this spec work for free for two reasons: 1. I’m an idiot. 2. At the time, I was trying to get a job in Vice’s creative studio, and was told that that was a good possibility. So, I did some more free spec ads (again, on assignment), this time for Vice Sports, and again was told they were great. I’ll get that studio job someday, maybe when I get some more creative experience under my belt.

Anyway, Josh! These beautiful concepts are all yours. Just give me proper credit, maybe throw me a link, or a nice bottle of White Girl Rosé.