Was ‘Hercules’ A Branding Win for The Weather Channel? 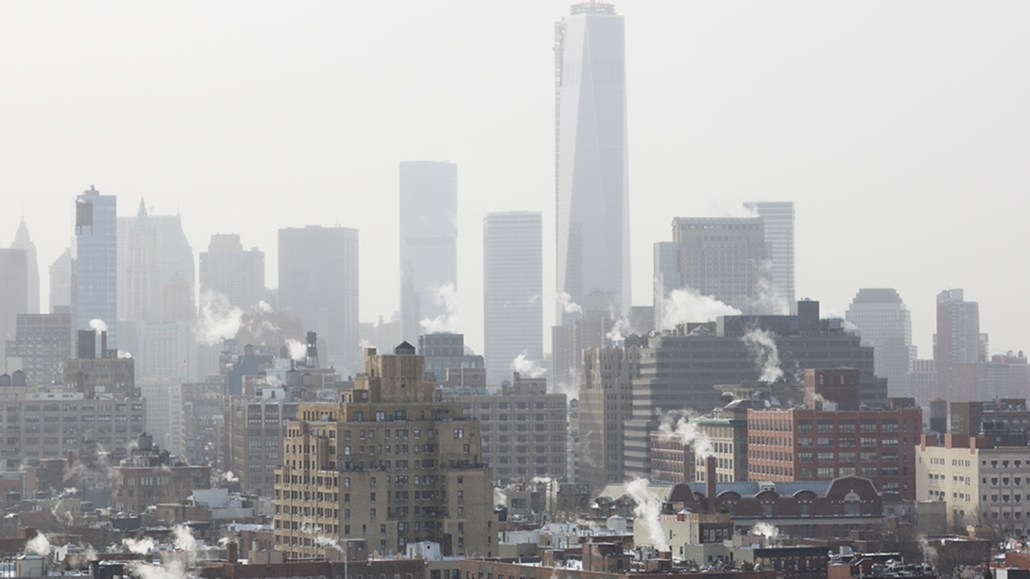 There was a time when snowstorms were not news. They were just what happens in winter. That time is not now.

Last night, a storm swept through the Northeast, delivering between five and 20 inches of snow to several states. The Weather Channel has branded the storm “Hercules,” part of a yearlong program to name winter storms — and drum up excitement (and ratings) in the process.

The reaction to the effort has been decidedly mixed. Some see it as harmless fun — who doesn’t get excited by snow? — while others see it as needless frivolity and evidence that even the weather is being sensationalized to an alarming degree. After all, only hurricanes previously got the distinction of names.

Naturally, The Weather Channel insists its catchy storm names are something of a public service. Naming the weather system and tweeting it out with a hashtag, according to The Weather Channel, raises awareness for the storm and makes it easier for people to follow along, especially when referencing a particular instance.

“It’s focusing the communications in a natural kind of way people are used to — the names for the hurricanes work perfectly for Twitter,” said Bryan Norcross, a senior executive director of weather content and presentation for The Weather Channel.

Perhaps. But anything that can be branded will be branded nowadays. Back in October 2011, a freak fall storm quickly went viral with the Weather Channel-inspired hashtag #snowtober. Why not continue this for all snowstorms?

And yet for some, the naming of winter storms is a sign of branding run amok, the epitome of silliness in the name of ratings and buzz. On the Weather Channel’s own post explaining its storm names, the reception was decidedly mixed. One commenter called the effort “the most asinine, self-serving thing TWC has ever done.” No less an authority on good taste than People has called naming winter storms “bad science” — and composed its tongue-in-cheek post on the storm entirely out of Disney’s “Hercules” GIFs. Author Stephen King is no fan: 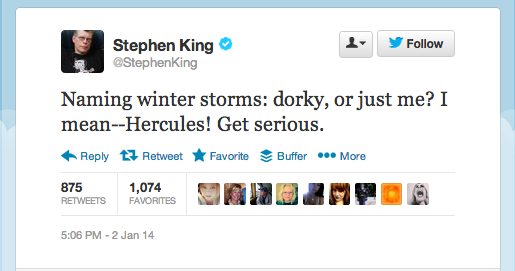 But the proof is in the buzz. For The Weather Channel, the effort is a way to drum up the storm as an “event.” The key is getting its brand adopted, even though it obviously has no standing to name storms. (Hurricanes and tropical storms are given their designations by the World Meteorological Organization. The names are used in order to differentiate simultaneous storms.)

The Weather Channel began branding snowstorms last year. Last January, it named winter storm #Nemo,which was a smashing success. received 1.1 million tweets and 1.2 billion gross impressions in total, according to The Weather Channel. Hercules, on the other hand, may not have had as strong a showing. Between yesterday and today 67,000 tweets have mentioned “Hercules,” according to Crimson Hexagon’s senior content and digital marketing strategist Elizabeth Breese, though the intent of its use is unclear: as it happens, “The Legend of Hercules” is a movie that will be hitting the screens on January 10 and promotion is in full swing.

The Weather Channel has only been mentioned in tweets 1,500 times alongside the name in the past day. The company was mentioned 19,000 times during the course of #Nemo over a three-day period. On the other hand, The Hercules tag has been used by Governor Chris Christie, and is holding steady under New York Trends on Twitter. Publishers like Vanity Fair, The New York Post, and The Christian Science Monitor, and The Daily Beast are using the name Hercules in articles

“In order to use Twitter right, you need hashtags and you need to filter,” said Norcross. “Otherwise you’re not going to find anything.”