The Hot Pockets guide to bungling a PR crisis

Put down that freshly microwaved Hot Pocket and slowly back away. Nestlé, as part of a larger meat recall by Rancho Feeding Corp., has voluntarily recalled two of its Hot Pockets products because they contain “diseased and unsound animal contents.” Fallout for the brand has been fast and furious, especially on the Internet, where aside from a Facebook announcement, the company has remained largely mum.

This certainly isn’t the first time a food brand has had to deal with a product recall, and there have been much more serious cases. In 1993, a Jack in the Box E.coli outbreak caused the death of four children and illness in 178 other people. So far, there have been no illnesses or deaths reported in relation tainted Hot Pockets. But in the social media era, how a company responds online during these moments of crisis can completely determine how a brand bounces back — or doesn’t.

Aside from the official press release, Hot Pockets has also posted an announcement about the recall on Facebook instructing people to return the affected products. The post has 99 shares so far and more than 40 comments, many of which express anger and fear. Hot Pockets has been responding to these people with cookie-cutter responses, giving people a hotline number to call to ask specific questions. 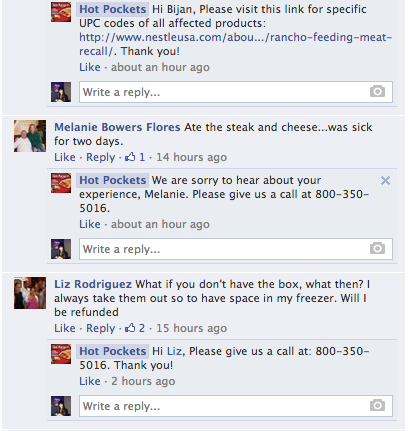 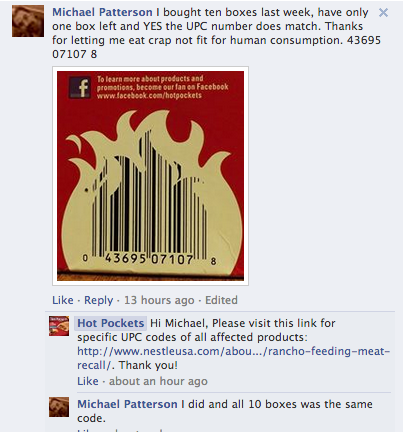 “They are doing a good job of answering questions about what to do with products and if they need to be returned,” allowed Bernstein, “but they are making the major mistake of copy-pasting responses whether it’s to a furious customer or someone asking about if they need to take their son to the hospital.”

UPDATE: It does appear that late Wednesday, Hot Pockets did shift gears somewhat and start tweeting information about the recall to its followers. The statements were still fairly boilerplate, but at least more tonally appropriate.

In times of brand crisis, whether or not the crisis started on social or simply ended up there — which it always does — people just want an honest and open apology from brands, and in the age of real-time everything, they want it fast. Plum Organic, a baby food brand, was in a similar situation last November, and handled the voluntary recall in much the same way as Hot Pocket. Plum Organics was also faced with tons of angry Facebook messages from parents wanting an explanation.

The company’s recall posts seem to have been deleted from its Facebook page, but the International Business Times included some of the Facebook comments in its coverage. For example, Clair Robinson posted: “Plum – please stop posting the exact same post ‘we truly apologize…’ over and over again. Instead please provide us concerned parents with some real answers.”

“Brands need to apologize in situations like this,” said Peter LaMotte, svp and digital communications chair at PR firm Levick. “The lawyers will always be uncomfortable with a brand apologizing, but if the brand wants to hold its loyalists and grow beyond the crisis, they need to show they are sorry and that they are taking action so it doesn’t happen again, and social media is the best way to do that.”

Digiday reached out to Nestlé for a comment about how it is planning on using social media, if at all, to further address the situation, but the company declined to respond. On Twitter, it’s business as usual for Hot Pocket. Yesterday, Hot Pocket tweeted a typical corny brand tweet using the hashtag #WeCantDateIf. Naturally, people took this as an opportunity to slam the brand for its use of “unsound” meat. 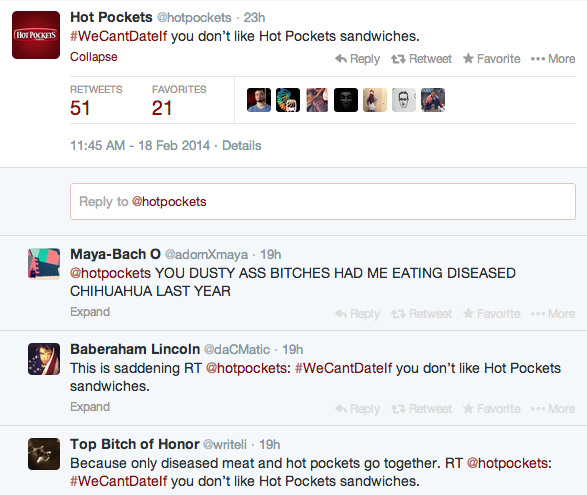 As LaMotte suggested to Digiday, the brand would be better served by taking control of the online conversation and steering the discourse away from scary FDA terms like “diseased” and “unsound” and instead move the conversation to focus on apologizing and emphasizing the good things that the brand delivers.

Taco Bell was sued in 2011, accused of falsely advertising that its menu items contain pure beef, instead of a meat mixture made up of just 35 percent beef (with the remaining 65 percent containing water, wheat oats, soy lecithin, maltodrextrin, anti-dusting agent and modified corn starch). Taco Bell thoroughly demolished the (ultimately unfounded) claims in a highly effective social media campaign that included a YouTube video starring the company’s president and a tongue-in-cheek slogan “Thank You for Suing Us,” as a way to actually promote Taco Bell and the integrity of its ingredients.

The lawsuit was eventually withdrawn, and according to a study from Wave Metrix at the time, 91 percent and 89 percent of consumers responded positively to Taco Bell’s statements on Facebook and YouTube, respectively. The takeaway was that, especially in times of crisis, brands need to be as human as possible, even while keeping their legal limitations in mind — which is easier said than done.

“Behind every corporate crisis there is a team of lawyers trying to control everything that is being said on social, but brands need to convey the message in a personal way,” said LaMotte. “They need to show they are a collection of people trying to make a product and not a corporation trying to make a profit — this will serve them in the long run, and those who are advocates of the brand will take the banner and carry it for them.”