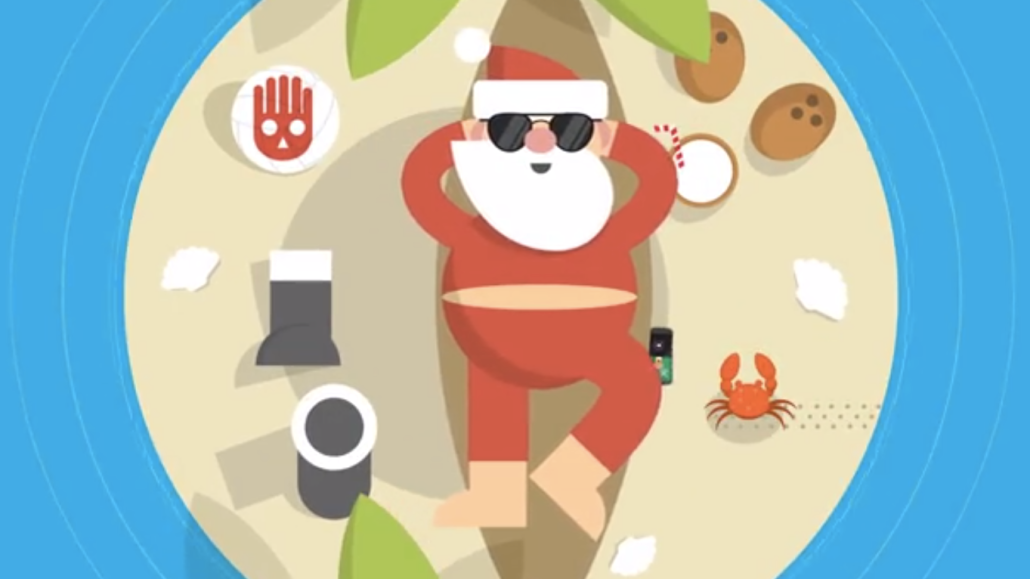 As if Christmas wasn’t commercialized enough, two of the world’s most notable tech companies have turned it into a Santa tracking grudge match.

Google and Microsoft are celebrating the holiday season by releasing competing websites that purport to track Santa’s whereabouts. While the actual “real-time” monitoring of St. Nick’s annual circumnavigation won’t begin until December 24, each Santa tracker is designed to entertain users every day until Christmas Eve. (Santa is currently somewhere at sea, jet skiing back to the North Pole, according to Google’s estimation.)

Each Santa tracker has a distinct style. Google’s is done with typical Google minimalism. A different animation or game becomes available on the site each day.

Microsoft created its Santa tracker for the North American Aerospace Defense Command (NORAD), and it has far more features than Google’s new site (no drones, though). The site’s URL – noradsanta.org – bears NORAD’s name, as it has in years past, but it’s now stamped with Microsoft’s Internet Explorer logo. NORAD’s tracker was engineered by Google until 2011, but the defense organization decided to “go in a different direction” last year when it sought out Microsoft, U.S. Navy Lt. Commander Bill Lewis told Digiday.

The design of NORAD’s Santa’s village evokes 1970 claymation fare like “Santa Claus is Comin’ to Town.” There’s a music center where users can listen to Christmas songs performed by the U.S. Air Force Academy Band and a virtual theater where you can watch videos about NORAD. Ever culturally with it, Microsoft’s videos feature appearances from celebrity Santa trackers Melissa Joan Hart and Joey Lawrence.

Of course, the catch is that since NORAD’s tracker was created by Microsoft’s Internet Explorer team, the site did not perfectly render on other platforms. (A few navigation features on the website were not working on a desktop version of Chrome and Safari on an iPad as of Wednesday morning.)

Still, Lewis said that its Santa tracking hub is designed with HTML5 and is thus meant to run on all screens and browsers.

If history is a barometer, NORAD’s tracker is likely to get a lot of traffic. It has seen traffic increase every year since 2008. Traffic increased from 18.9 million uniques in December 2011 when NORAD was working with Google to 22.3 million in December of last year, its first year with Microsoft.

The real test of who did Christmas better will be on Christmas Eve. Microsoft and Google’s Santa trackers are designed to work with Bing Maps and Google Maps, respectively. It’ll be a fun thing to do while you listen to your Christmas playlist on your Zune.