Get Free Weiners from the Anthony Weiner Truck 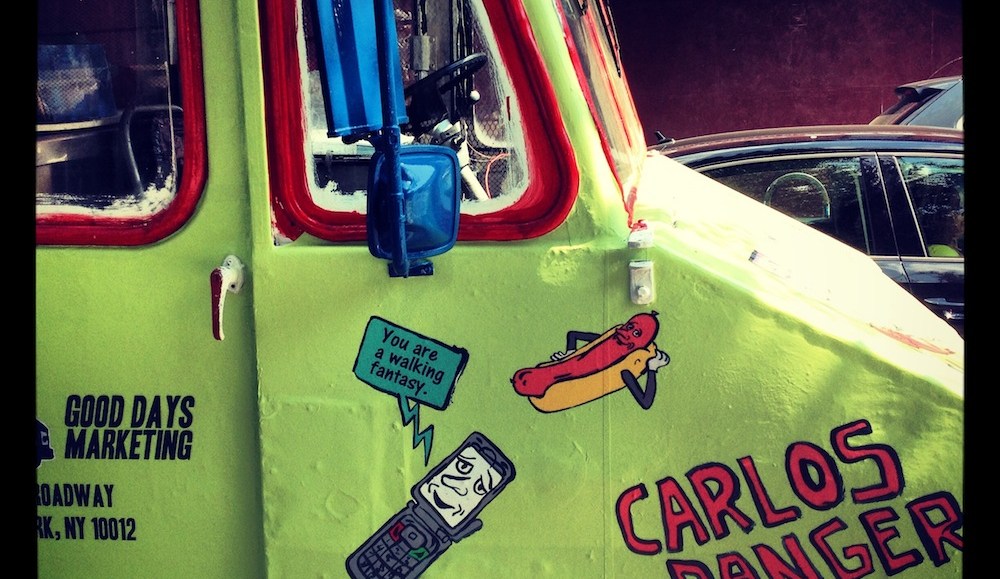 The Anthony Weiner hot dog truck, emblazoned with a caricature of the serially disgraced New York City mayoral candidate and phrases like “get my weiners,” would seem the perfect subversive campaign tactic by a fellow mayoral candidate. But, alas, it’s not.

As luck would have it, the Good Days office happens to be right across the street from Dominique Ansel Bakery, home of the viral pastry sensation, the Cronut. As Good Days co-founder and creative director Joey Goodwin explained, he saw an epic opportunity to pull off a fun marketing stunt for Good Days. Goodwin got the idea from a friend of his father’s who used a funny flying banner as part of his run for governor.

Goodwin and his creative partner and co-founder John Gagliano quickly threw together their “Anthony Weiner’s Weiner Truck” and parked it on Spring Street last week in plain sight of all of the people waiting in line for Cronuts and the rest of Soho to see. They also took it to other locations around the city and handed out free hot dogs. The truck is decked out with a painted portrait of Mr. Weiner along with hot dogs and mobile phones with sexty messages like “You are a walking fantasy.” Oh and of course mentions of Carlos Danger.

“The reactions have been pretty great, people want to stop to take their picture in front of it with their friends,” said Goodwin.

According to Goodwin, this is the kind of stuff Good Days loves to do and hopes to help brands do, too. And it seems the stunt is paying off for Good Days, because since buzz about the Weiner truck has been growing — it was featured on CNN and Grub Street — some brands have been in contact with Goodwin about doing similarly satirical campaigns. Goodwin recognizes that not all brands can take advantage of these kinds of riskier topics like sexting scandals (although some brands like Spirit Airlines didn’t shy away from it), but he does think that if brands have a history of having a sense of humor, they can make things like an Anthony Weiner truck work.

“Something like this makes you relevant for a minute — it’s like being on reality TV,” said Goodwin. “Everything moves so fast, so you always have to be working and coming up with the next thing. Relevance only lasts a second, so you have to have quality work to back it up, too.”

Oh, and one more thing: If you want to own the truck, it can be yours! It’s on eBay. Happy bidding.