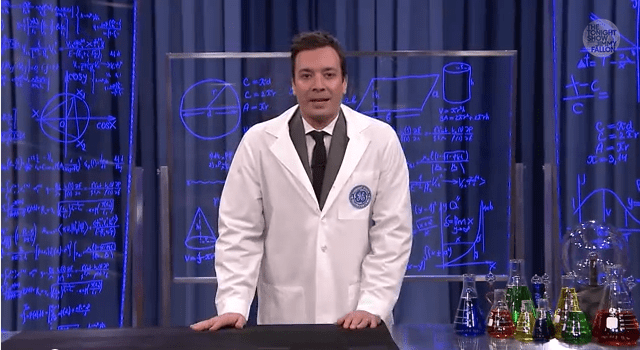 Last month, Jimmy Fallon had a group of teen inventors come on “The Tonight Show” to show off their gadgets. Anne, 16, showed off her flashlight powered by the heat of the human hand. Jonathan, 13, created something called an “iHead,” which is essentially headgear with your iPhone attached to it via suction cup.

This young-inventors showcase is called “Fallonvention,” or rather “GE’s Fallonvention,” and it will be a reoccurring segment on the late night talk show featuring young inventors and their creations, along with Fallon’s own funny inventions and commentary. This is what branded TV looks like. And it is part of GE’s latest big push into the industry’s buzzed-about ad format: native advertising.

As GE’s executive director of global brand marketing, Linda Boff, explained, GE is “leaning in” to native advertising more and more. The multinational conglomerate has been one of the early adopters of the “brand as content creator” trend, using social media platforms and online media partnerships to establish itself as more than a brand that makes big machines, but rather a brand that cultivates and supports a culture of innovation and invention. And as an advertiser today, GE sees native advertising as integral to innovative marketing.

“We embraced native four years ago with BuzzFeed and Tumblr in-stream advertising,” said Boff. “Perhaps where the change is coming from is that there are more opportunities out there than there were before, and I think we are asking for, as probably other brands are, media partners to join us on these opportunities.”

Native, added Boff, has become a go-to way for GE to communicate who they are as a company. “Great content can come from a lot of different places, but funnily enough, it seems to be traditional media can get a little more attention when it comes to native,” she said.

GE has a few big native ad programs either up and running or in the works currently. Along with the one-year NBC partnership for the Fallonvention segment, GE also invested in a content partnership with The Economist in the form of a blog called “Look Ahead,” which lives at gelookahead.economist.com and features daily content about innovation across various business sectors with articles like “Five revolutionary jet engines” and “Start me up,” about how organizations can think like startups. GE has also signed on as the launch sponsor for Quartz India.

“We work incredibly hard on these partnerships; we put more time into something like ‘The Tonight Show’ integration or The Economist than we do something where we are creating a piece of content and simply putting it in a time slot or a rectangle,” said Boff. “We really think about every aspect — the sweat equity we are putting in to this is because we want it to stand out, we want to create great stories.”

In other words, they take the harder route precisely because it’s more difficult. So don’t expect to see run-of-the-mill pre-roll from Boff’s team. “I worry that those are increasingly less visible; they are becoming a little like wallpaper,” she said. “We lean in much harder to branded content because we are always looking for new ways to get our story out there.”

While Boff said it was still too early to draw any final conclusions, so far she thinks the extra effort it takes to create good native content is worth it. Boff called the Fallonvention a “home run” for GE. The first segment has gotten 333,106 views on YouTube so far, and, according to Boff, the video completion rate is 92 percent. GE will continue to measure its native ad content’s success with the usual metrics it would look at for other campaigns, like engagement numbers, click-through rates and social sharing.

“You have three parties involved: You have the brand, the publisher and, most importantly, you have the consumer,” said Boff. “And it has to be a great experience for them.”