The @FuckJerry guide to modern branding

In the age of aggregation, @FuckJerry is a star.

The popular Instagram account has 5 million followers, built over the past four years by scouring the Web for images and then slapping irreverent captions on them. Elliot Telebe and Elie Ballas are the 24-year-old pals behind the comedy account, whose name was loosely inspired by Jerry Seinfeld.

They’ve captured the attention of Funny or Die, which resulted in an official content partnership, and this summer, they plan to launch @FuckJerry’s first fashion line, which they describe as streetwear “with a comedic voice.” And while not all brands might be ready to embrace their edgy humor, they’re doing something right. Here, then, are five things @FuckJerry could teach brands:

Appeal to universal tastes
Through @FuckJerry and its related accounts — including @KanyeDoingThings, @pizza, @sneakers — the pair stick with the subjects they’re passionate about (and which also happen to be relatable), including comedy, sports, sneakers and hip-hop. But they know not to ignore what works best on the Internet, which is why there are plenty of cats, dogs and kids, too. 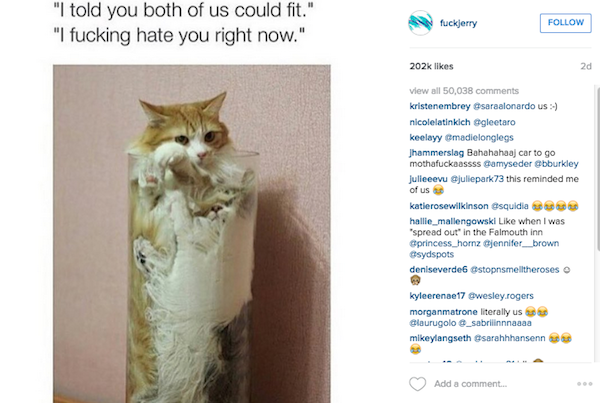 Be different
The Internet has grown up and, with it, gotten a design sense. Along with relying on aggregation, @FuckJerry has chosen a minimalist if not anti-design sensibility, from its basic Solo cup-inspired logo to the plain-vanilla font and white background.

“It’s a very Web 1.0 solution to a Web 20.0 way of thinking about content,” said Luke Carrell, strategy director at social media agency We Are Social. “The production value is low, but the creative nature and voice are so strong, it almost doesn’t matter. The visuals themselves almost get out of the way. In a world where there’s such an emphasis of hyper-realness, this glossy sensibility, taking a simplistic, almost Luddite feel is disruptive.”

Staying power
It’s fashionable for brands to try to capitalize on news and trending topics. @FuckJerry’s feed recently included several Fourth of July posts and one about a new Snapchat feature, but for the most part, it isn’t particularly news-driven. Most of its posts are driven by pop culture, which it comments on through the use of others’ photos or tweets or its own commentary. What it gives up by missing out on the news cycle, it gains in the sense that its humor has the potential to have more staying power.

Stay on mission
There are obvious limitations to @FuckJerry’s ability to attract advertising, but, nonetheless, it has posted some sponsored pictures for brands including VH1, Diesel and Burger King, and is hoping to do more. They’ll change the name to “FJerry” if a brand demands it, or steer them to their other accounts like @Vibes and @Pizza that are more brand-safe. But Telebe and Ballas are aware that they have to hold everything they post to the same standard or risk alienating their fan base. “We rarely do sponsored posts, but when we do, we make sure they are as organic to FuckJerry as possible,” they emailed. “The audience always comes first.”

“There’s just a small amount of brand advertisers that would be comfortable being close to that content, so they just need to be careful they stay close to those advertisers,” warned Ted Murphy, founder and CEO of Izea, an influencer marketing firm. “Because if they tone it down, the engagement will drop. Keep doing what you do, and find the right partners.”