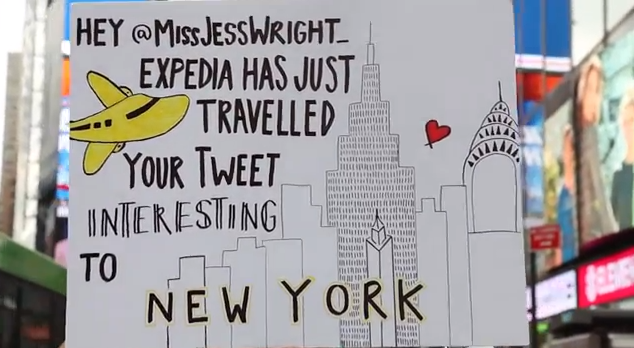 We all know those people who tweet about needing a new shower curtain or walking to get coffee — you know, boring stuff you don’t need to see in your Twitter feed. For the latest part of its “Travel Yourself Interesting” campaign, Expedia tried to turn that sort of Twitter drivel into something more fun – by literally sending your boring tweets to a exciting new location.

With the help of Ogilvy & Mather London, Expedia asked people to use the hashtag #TYI (for Travel Yourself Interesting) on their most mundane tweets for a chance to have those tweets transformed into random, fun content –and also for the chance to win prizes including sandcastle-shaped cakes and a grand prize luxury trip to Abu Dhabi.

“Much of what is tweeted can be a little dull, so we thought why not use travel and interesting locations and destinations to make some tweets a little more interesting?” explained Gerry Human, chief creative officer at Ogilvy London.

We sent @dimples777's tweet to a place where cats lap up the (ice) cream. #TYI pic.twitter.com/YcdJAB0Ngj

Some of Expedia’s responses didn’t make so much sense, like putting someone’s tweet about eczema on the side of a NYC taxi, but either way, Twitter fans seemed pleased to have special content made for them by a brand. According to Human, he and his team made it a point to turn around these fun tweets as fast as possible — fun fact tweet responses within five minutes and image replies in under 120 minutes.

But as we know, people aren’t the only ones guilty of tweeting badly — as a matter of fact, it’s usually the brands who are guilty of this most often. Human’s advice to brands on twitter: “Don’t take yourself too seriously. Don’t tweet about shower gel.”