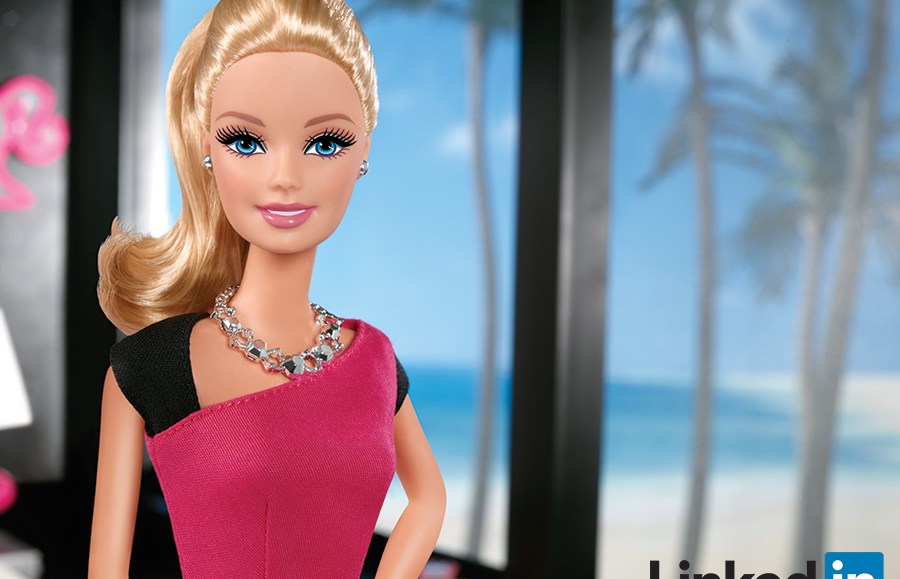 There’s a new star in the professional networking constellation — but be warned, she’s a bit plastic. Mattel launched a new LinkedIn page for its most famous brand ambassador on Friday, following the debut the “Entrepreneur Barbie.” Looks like she’s all set to make new connections.

According to Barbie’s LinkedIn, she is a consultant at her latest venture “Dream Incubator,” which seeks out to help girls around the world to “play out their imagination, try on different careers, and explore the world around them.” It even has a tagline, “If you can dream it, you can be it!”

The page is replete with career tips, a bulky resume (as befits Barbie’s 55-year long career comprising more than 150 jobs), as well as profiles of real-life successful entrepreneurs selected by Mattel. It seems to be gathering a steady stream of followers, with more than 800 already, several gushing over their favorite girl from childhood in the comments.

The page can be seen as a way for Mattel to modernize Barbie for the lean-in era. After all, Barbie for most of her career has represented the opposite: a leggy starlet with little in the way of ambition beyond snaring Ken and shopping till she drops. Now, she’s in the disruption game.

“In celebration of Barbie’s newest career as an Entrepreneur, her LinkedIn page is a way to connect with women business leaders from all over the world and showcase her impressive 150-plus career resume,” said an assistant account executive at Ketchum, Mattel’s PR and marketing agency.

Mattel is utilizing LinkedIn’s “Showcase pages” to its advantage, content-heavy pages for companies to show off a variety of brands and products individually, as a means of interacting with users.

The campaign — which comes on the heels of Barbie’s “unapologetic” appearance in this years Sports Illustrated swimsuit issue — extends beyond LinkedIn and also includes a billboard in Time Square, a social campaign including a Pink Power Lunch that was launched on June 18 with the women entrepreneurs and a digital online portal that includes career tips, career-themed games, blog posts and activities.

Among women Mattel has chosen to profile alongside Entrepreneur Barbie are the founders and chief executives of Rent The Runway, Girls Who Code, Sugarfina, Genuine Insights Inc., One Kings Lane, The TomKat Studio and Plum Alley.

Jennifer Fleiss, co-founder of Rent The Runway, said in an interview on the Barbie website that playing with Barbie as a child helped her to step into a number of roles. “She is my idea of a go-getter girl and has encouraged me to believe that women can have it all: a career, a family, and a great wardrobe,” she said.

Of course, Barbie’s target demographic is hardly the most active LinkedIn user. But the Ketchum spokesperson remains unperturbed. “Barbie has fans of all ages,” she said, adding that the page was “a nod to those fans and the communities of successful women who are also breaking barriers and dreaming big.”

However, not everyone is impressed. Salon called Entrepreneur Barbie a “modern woman with her smartphone and her tablet stuck in a sexist, outdated, dangerous representation of femininity,” while Forbes said the doll is an “affront.”