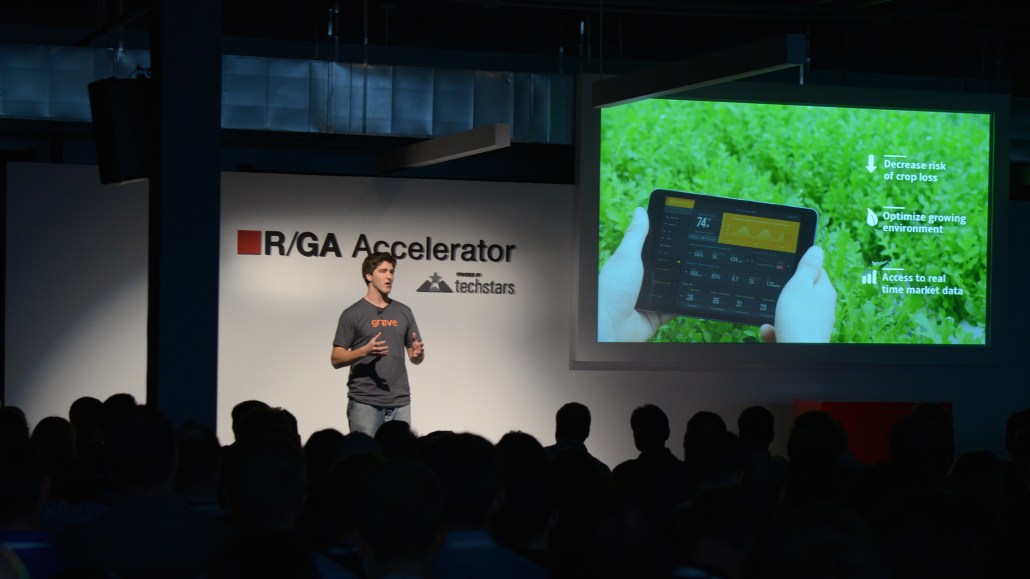 Gabe Blanchet had a slight case of the “butterflies” in R/GA’s Austin office on Saturday afternoon, during South by Southwest. After more than three months of marketing training in R/GA and Techstars’s connected device accelerator, the founder of startup Grove, was just minutes away from pitching his company onstage to some of the world’s foremost brands and venture capitalists. VC firms Andreessen Horowitz and True Ventures were in attendance, according to Dylan Boyd, managing director at startup accelerator Techstars. R/GA brought executives from Johnson & Johnson, L’Oreal, Makerbot and Nike.

It’s not that Blanchet has any doubts about the viability of Grove’s products. Blanchet thinks Grove — which makes appliances and software designed to more efficiently grow food — can literally change the world. He imagines a future in which city-dwellers grow tomatoes in their kitchens, thus drastically reducing the carbon emissions associated with food transportation. He also thinks Grove can be an agent for change in developing countries with unsustainable agricultural systems. It’s a strong message, but not one that necessarily resonates with the average consumer.

Which is exactly why Blanchet chose several months ago to enter R/GA’s accelerator instead of other, better-known ones. Blanchet knew he had a great idea. What he didn’t know was how best to sell it.

“R/GA has done a great job of packaging Grove’s story,” Blanchet told Digiday. Prior to the accelerator, Blanchet lacked confidence regarding Grove’s brand message, he added. Now he had it, although he was understandably a tad nervous. 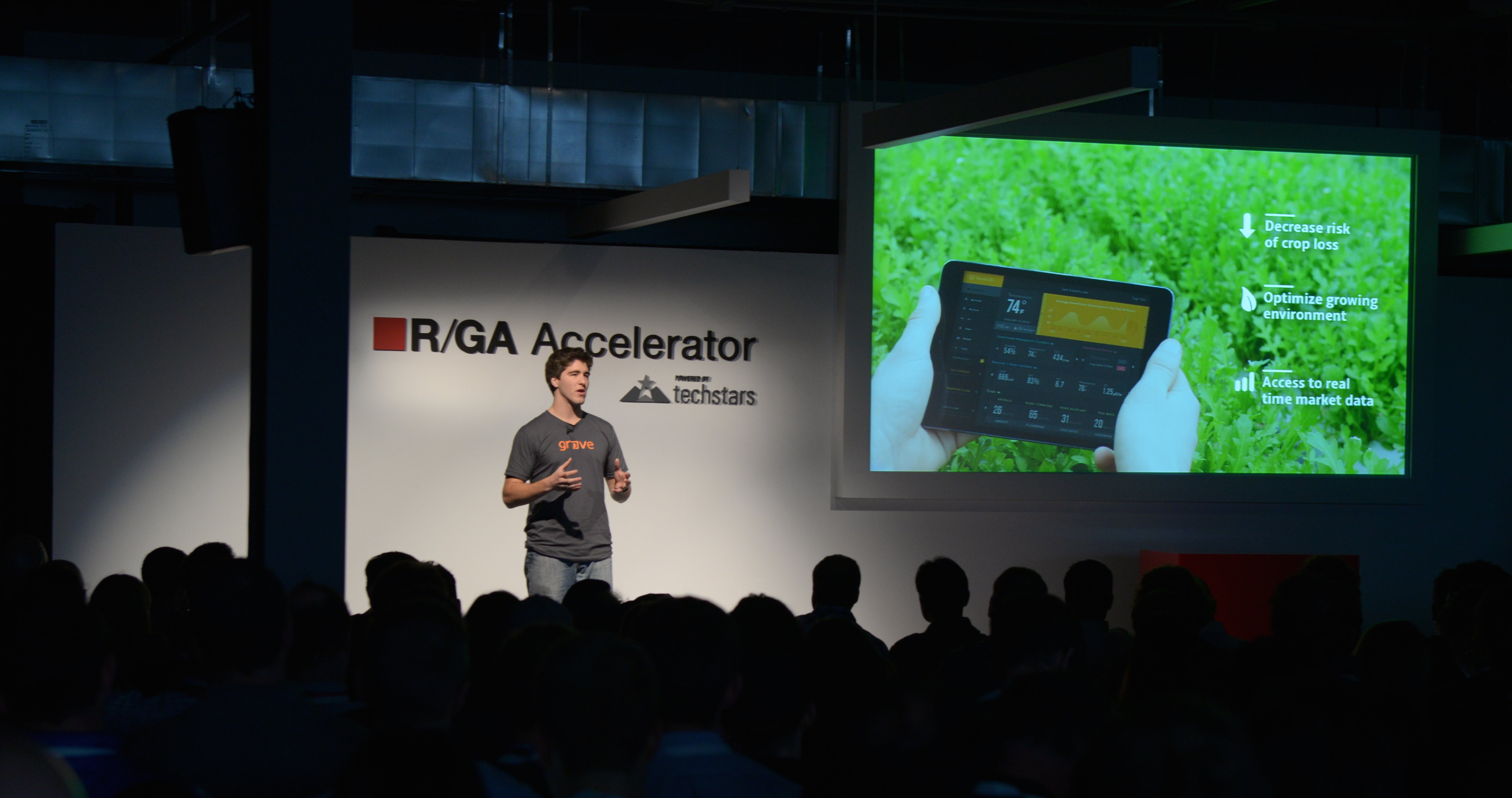 In that sense, R/GA’s accelerator was a success. There are many accelerators for promising startups to choose from. R/GA tried to differentiate its program in part by focusing on “Internet of things” companies, and, perhaps more importantly, forcing those companies to think themselves as consumer-facing brands instead of just startups.

Hammerhead had little difficulty adopting a consumer’s point of view because its product, a navigation device for cyclists, is relatively easy for a potential customer to understand, according to Stephen Plumlee, R/GA’s chief operating officer. Grove struggled a bit, however, because its message can be too far-reaching at times, he said.

“It was a new experience for the startups, for sure,” Plumlee said. “It took some time and some effort.”

That three months of effort resulted in some drastic aesthetic changes for some of the startups, and in some cases, product tweaks aimed at making the startups more customer-friendly. When Keen Home entered the program, it talked about how its Internet-enabled air vents can help homeowners cut down on the heating and cooling bills. Keen Home’s product still does that, but now its message is about helping customers be “comfortable” in every room in their homes. Keen Home simplified the interface on its app so users can simply swipe up and down to change a room’s temperature. And instead of displaying temperatures, the app uses red and blue to indicate warm and cold, respectively. Users don’t input a specific temperature anymore, they say whether they want to make a room “warmer” or “cooler.” R/GA even helped Keen Home design a new corporate logo which has been integrated throughout the app. Keen Home was also sporting the new logo on its new baby blue company polos.

Hammerhead also revamped its logo — an H with two arrows subtly woven in — and altered its product components. The light up display on Hammerhead’s all-black navigation device is reminiscent of the Nike Fuelband, but Hammerhead had that design before it entered the program.

Of course, the true measure of success for any accelerator is whether the startups it once housed become lucrative companies in their own right. Google’s recent $3.2 billion acquisition of Nest Labs shows there’s money to be had in the burgeoning Internet of things industry. But before a company be acquired, it has to demonstrate traction. That’s why the presentation room was packed with potential investors and brand partners, and why the presentations included exciting sales and partnership announcements.

Grove announced that the United Arab Emirates government has agreed to use Grove’s sensors and software to improve its agricultural infrastructure, Blanchet said in his presentation. Enertiv, which brings Internet connectivity to breaker boxes in order to help buildings better monitor their energy consumption, announced it had added fitness company Equinox, an R/GA client, as a customer.

The presenters were adept at selling themselves, especially Keen Home co-founder Ryan Fant, whose measured, confident pitch reminded this reporter of Steve Jobs. Fant opened with a legitimately clever “The Jetsons” joke and elicited audible cheers when he announced partnerships with home improvement retailer Lowe’s and home security provider ADT.

Granted, Fant is no stranger to the stage. He’s performed in approximately 20 musicals, he said. Still, Fant credited the accelerator for helping him make Keen Home’s pitch “exciting but simple.”

“They really helped us get the message to be as simple as it could get,” Fant told Digiday.

The program has apparently been fruitful for R/GA, too. R/GA ceo Bob Greenberg started the festivities by announcing that the agency and Techstars would be hosting another one in the fall.