Domino’s To Feed Startups, One Pie At A Time 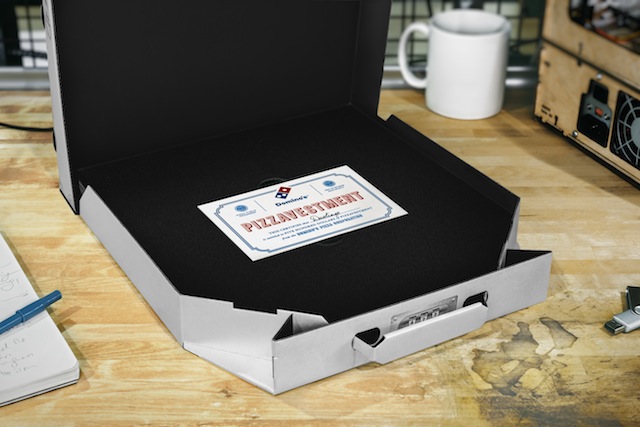 Pizza, not necessity, is the mother of invention. At least that’s the idea behind Domino’s Pizza campaign “Powered by Pizza.”

With the help of agency CP+B, the fast food pizza chain is offering to feed 30 startups with “pizzavestments” – $500 Domino’s gift cards – because startup life often involves late nights of working non-stop and ordering pizza for everyone to eat while they continue to work.

“This campaign was born out of Domino’s own history,” said Matt Talbot, creative director at CP+B. “They have an interesting statistic: About 90 percent of Domino’s franchise owners started as entry-level workers, as delivery guys, and worked their way up. So the idea started as feeding the American dream within their own organization and then expanded to pizza’s presence in other companies’ pursuits of the American dream.”

Domino’s is determining which  30 startups to reward with these pizzavestments. Toward that end, CP+B’s research of American startups will be identifying those that have “innovative business models or focus on products, tech or hard goods, that are made in America,” as Talbot explained.

Dominos has already given a handful of startups these pizzavestment gift cards, including consumer feedback startup Blacklist, and Duolingo, a language-education and crowdsourcing translation startup.

As part of the campaign, Domino’s is also partnering with crowd-funding site Indiegogo to reward people who support startups. People who pledge to support certain Indiegogo projects will be eligible for “Powered by Pizza Perks” in the form of Domino’s gift cards if the projects reach their funding goals.

RT if pizza has gotten you through some late nights. @Reply if tonight might be one of those nights. #poweredbypizza pic.twitter.com/DU1uNPJ8Lt