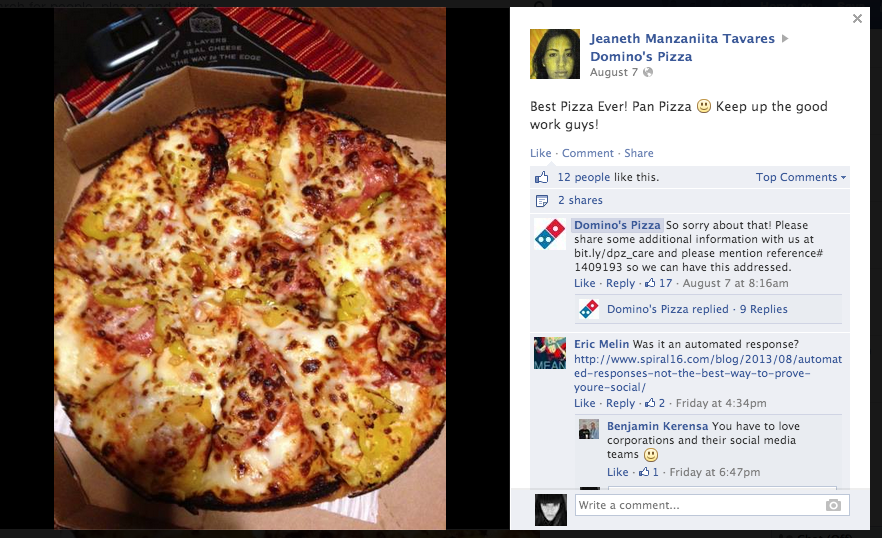 The fast-food pizza brand responded with what seemed like an automated customer service bot to happy customer Jeaneth Manzaniita Tavares. The problem is that the Tavares posted a compliment about Domino’s on its Facebook page, and Domino’s responded with an apology: “So sorry about that! Please share some additional information with us at bit.ly/dpz_care and please mention reference# 1409193 so we can have this addressed.”

Much like Bank of America’s Twitter fail last month, Domino’s failed to use social media as a human voice for the brand and instead turned a positive earned media opportunity into yet another example of a brand social media fail.

Adding insult to injury, Domino’s tried to jokingly cover up the auto-response as an intentional response: 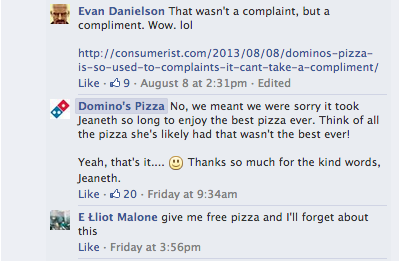 Lame. Honesty is always the best policy when it comes to brands on social. Domino’s explanation that they were apologizing that it took so long for Tavares to find good tasting pizza is obviously ridiculous and a bit insulting to social media savvy consumers. If that’s truly how Domino’s social media team handles fan compliments, then it seems that they need some more training. But it if it was an automated response or just human error, it is alway better for a brand to just fess up and own the mistake.

Update: Digiday reached out to Domino’s for its side of the story, and as it turns out it was not a bot or automated response, but an actual person who responded to the Facebook compliment.

“We are proud to have real human beings right here in our Ann Arbor headquarters reading and responding to posts,” explained Domino’s spokesperson Chris Brandon. “Real human beings make real human mistakes sometimes, and this was one of those times. It was an isolated situation in which one of our people simply goofed up. It happens. We were all, naturally, a little bit red-faced by this – but we’ve already moved on.”

Fair enough. Indeed, if brands are going to be human of Facebook, then they will of course make mistakes.