Consultancies take Cannes as agencies prep for a quieter festival 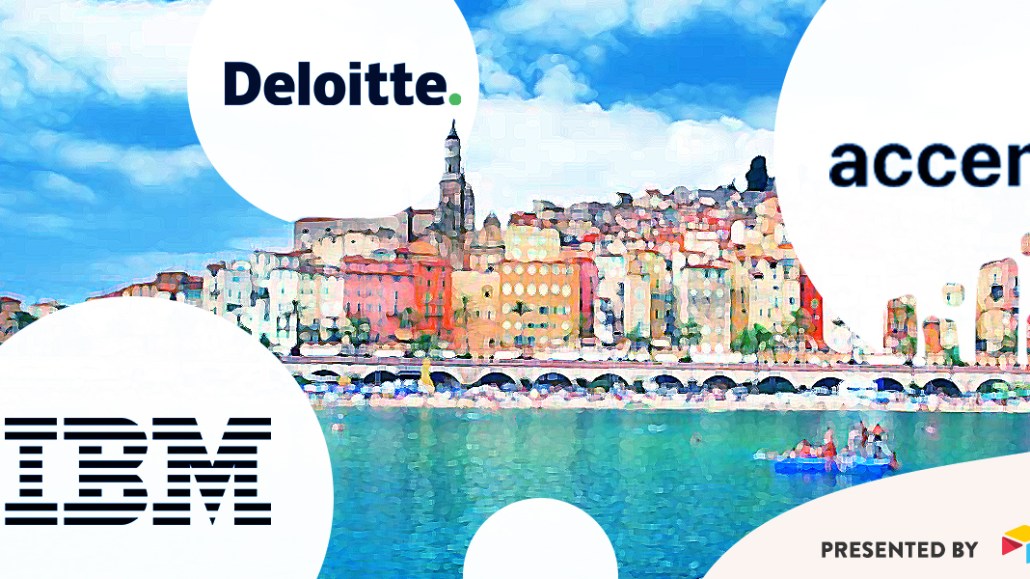 Every year, Cannes attendees find a new type of attendee to complain about. First, it was the clients, then the media companies, then the ad tech contingent, followed by the media agencies. This year is shaping up to be the year of the consultants.

Consulting companies are set to make a big splash in Cannes this year when the festival kicks off on June 18. While they certainly made their presence felt last year, it’s a move that’s starkly at odds with how traditional agencies seem to be approaching Cannes — fewer parties, fewer blowouts and much more introspection, if they’re there at all. Cannes organizer Ascential told investors yesterday it expects a “challenging trading environment” due to ad agencies cutting back. (Publicis Groupe has quit Cannes altogether for the year.)

As agencies pull back, consulting firms are pushing forward. IBM iX has a cabana on the Croisette double the size of its space last year, with talks both there and in the Palais. Accenture Interactive is planning its biggest year yet. The company has 10 senior executives on the ground and is taking over the M/Y Accama yacht in the Cannes harbor for a series of meetings and parties. It has jury members in almost every category and has also entered work. It’s also on the Cannes stage, with six sessions in the Palais.

(One of those is a conversation between Anatoly Roytman, managing director at the company and Publicis Groupe’s global chief creative Nick Law, one of the few officially sanctioned Publicis reps on the ground in the Cannes.)

Roytman said the company will double its investment in Cannes this year. In the past year, Accenture has completed acquisitions of multiple agencies, including Meredith Xcelerated Marketing, SinnerSchrader, Clearhead and The Monkeys. Roytman said the focus this year in Cannes is to have creatives meet each other and their clients.

“We had no discussions on whether we should even be there,” said Roytman.

The industry is undergoing a major transition, and one symbol of that is the rising presence of consulting companies in Cannes, even as agencies pull back. Agency holding company Publicis publicly announced last year it would sit out of Cannes as it focused resources elsewhere, including building its artificial intelligence platform Marcel. Overall, traditional agencies are reporting lowered revenue as margins continue to be squeezed.

For consultancies, there is no “reset” needed, according to Deloitte Digital CMO Alicia Hatch. She has 70 people attending, and the focus is on multiple CMO roundtables the company will do with the Association of National Advertisers, bringing senior execs together to discuss content creation and the rise of in-house agencies. “We’re completely focused on the future,” Hatch said. “Cannes is going to change as part of the change in the industry. That’s OK with us. It’s less about ‘Do we sit out?’ and more about where we focus.”

Deloitte, which has two spaces, one in the Majestic hotel and one in the Carlton, will also sponsor this year’s Young Lions School, its second time doing so, and the Cannes speakers’ lounge.

On the other hand, there is marked quiet on the agency end. Omnicom Media Group’s OMD, for example, has a whittled down presence, doing away with its Oasis cabana and sending half as many people, according to sources.

“We decided to retire the platform after 2017 to pre-empt wear-out,” said OMD CEO John Osborn. “This year, we’re focusing on curating customized experiences that align more closely with individual client interests and priorities. It’s a strategy that requires less manpower on the ground, while continuing to deliver value to our clients.”

Ogilvy will have a smaller presence, with fewer people, and the focus is less on parties and more about meetings and conversations. “We’re showing up differently,” said an Ogilvy rep. Some of the mainstay parties aren’t happening, such as J. Walter Thompson’s Friday soiree on C Plage.

An agency executive who was on the ground last year said some of the quiet is attributable to Publicis: When the news broke that the holding company would sit out, there was a palpable sigh of relief: “Someone had the made the first move and gave others permission to pull back.”

“I definitely think that the past Cannes, when all the headlines were about pullbacks, did force the industry to say, ‘What’s really important about this, and what are we trying to get out of it?’” said 360i President Abbey Klaassen, whose Cannes team is small and in line with the approach the agency has taken previously. “Agencies send a message to internal teams based on what they choose to invest in. Cannes is expensive. And if you’re having giant fancy parties and paying big celebs to show up, that’s money you can’t use in other things, investments in tech, or technology or training development.”