Coke gets nostalgic with the relaunch of its Surge brand 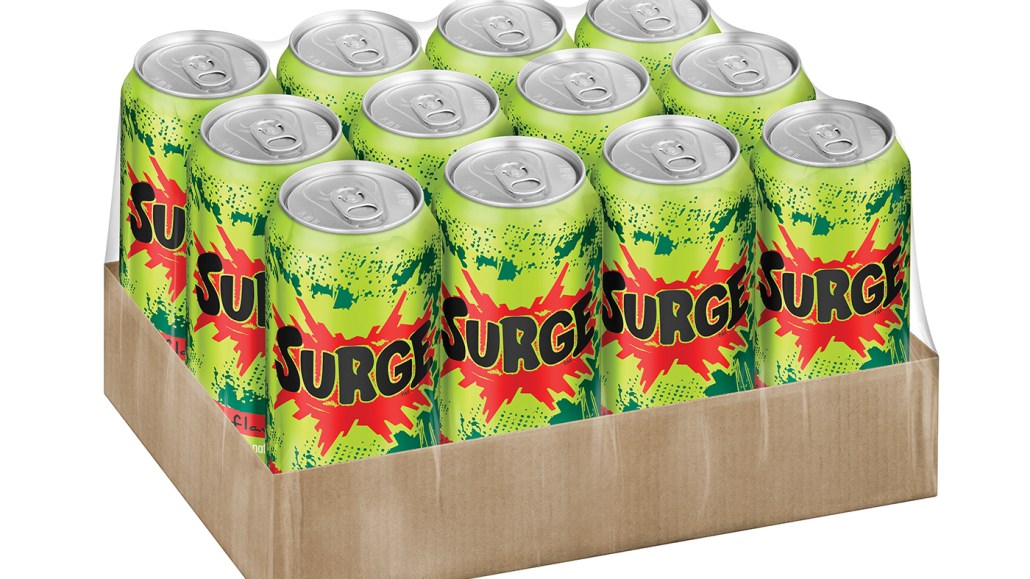 Coca-Cola is betting that a surge of nostalgia can help it revive its dormant Surge brand, the caffeine-packed 1990s competitor to Pepsi’s Mountain Dew. The announcement this week — met with a chorus of cheers and OMGs on Twitter — was the culmination of a lobbying effort launched by a trio of (wait for it) millennials.

Released in 1996 and removed from the shelves in the early 2000s, Surge is the most notable Coke brand relaunch since Classic Coke. And for that, thirsty kids everywhere can thank Evan Carr, Sean Sheridan and Matt Winans, who launched a viral campaign on Facebook called “The SURGE Movement”– which has over 144,300 likes. The three are all digital natives, they also went as far as buying an entire billboard to get Coke’s attention.

“Surge had a large, dedicated fan base in the ‘90 and early 2000’s that never quite went away,” said Sheree Robinson, from Coke’s public affairs and communications team. “The brand is for those looking for a bold taste that provides refreshment and a feeling of rejuvenation.”

The relaunch also marks the first time that Coke is distributing its products solely online, by  partnering with Amazon to exclusively sell a limited supply. The online retailer has partnered with Coke to reissue the brand online and closely monitor sales and inventory without taxing its distribution network. Moreover, this is also the first time that Coke will rely solely on social and digital media to promote the event, using on Surge’s Twitter handle to engage with the community. The hashtag that it is promoting, #SURGEisback, has been mentioned nearly 3,000 times over the past one month, according to Topsy.

“If expectations are met, this may be only the first of a variety of efforts we explore to launch niche products through e-commerce relationships,” said Wendy Clark, president of sparkling and strategic marketing, Coca-Cola North America.“ Racquel Mason, associate vice president of sparkling flavors, Coca-Cola North America, added that Coke was exploring segmented delivery of its portfolio to consumers in the new era of marketing.

The successful reanimation of Surge is part of a broader trend in marketing, especially when it comes to reaching out to millennials: nostalgia sells.

Microsoft played the nostalgia card while promoting its new version of the Internet Explorer in 2013, taking its 90s consumers on time-travel through a two-minute video.

Jack Daniels launched its “Legend campaign” in 2012 on the occasion of Frank Sinatra’s 100th birthday, putting up interactive stations centered around him at various airports.

The popularity of platforms such as Timehop, which unearths old pictures and tweets buried in users phones and social media histories on social platforms, also speaks to the trend.

Jeff Fromm, President at millennial-focused marketing consulting firm FutureCast and author of the book “Marketing to Millannials” said that Coke was a savvy brand that recognized that the consumer is no longer a passive target, as well as the difference between regular consumers as well as advocates like Carr, Sheridan and Winans.

“Coke recognizes that this is an opportunity to create passion and engagement among that group of advocates that evangelizes their brand,” he said. “This isn’t intrusive social media marketing, but a welcome encroachment in the form of an authentic content excellence strategy.”

And it’s not just what Coke is doing with Surge, but how it’s executing the campaign. The online-only release is tailor made for the millennial market.

“The fact that Coke is only relaunching the product in one marketplace (Amazon) speaks to this even more: they recognize that Surge is a kitsch product, and are treating it as such,” said Erik Devaney, content strategist at HubSpot. “You can’t go down to the corner store today and buy Pogs or Beanie Babies, but you can find them online. Surge has that same appeal: Surge was popular for a short period of time, disappeared completely, but is now perhaps even more popular.”

Now if only someone would re-release Jolt cola to give Gen X a little something back.