How the Clippers’ ‘We Are One’ slogan came about 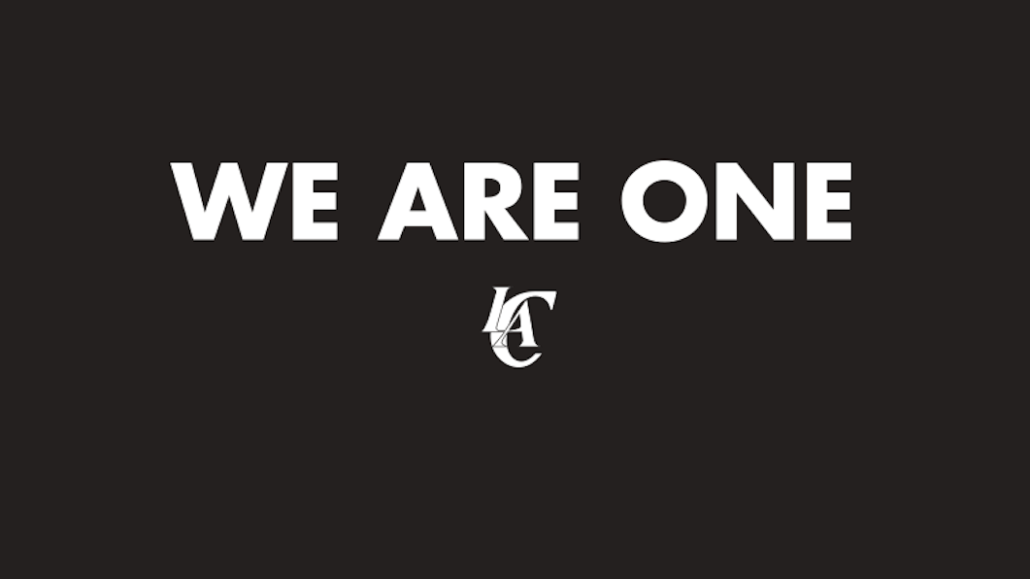 If there is any silver lining to the racist train wreck that is the Donald Sterling debacle, it’s that the Los Angeles Clippers have been able to use his termination as a springboard to send a strong message of unity. Remarkably the team has appeared to turn around the worst public relations crisis in the franchise’s history with what is being hailed as a deft — and quick — rebranding.

In the middle of NBA commissioner Adam Silver’s press conference — in which he announced the embattled Clippers owner would be banned for life from “any association with the Clippers organization or the NBA” and is facing the maximum $2.5 million fine for his hateful speech — the Clippers swapped out their splash page so that all it displayed was a simple, new black-and-white slogan: “We Are One.”

The Clippers teamed up with its ad agency HEILBrice and was heavily involved in the new site design and slogan. As Hal Brice, co-founder and CEO of HEILBrice, explained, the slogan idea came directly from the Clippers’ coach, Doc Rivers. In the midst of dealing updating the Clippers’ website as more and more sponsors announced they were pulling out over the weekend, HEILBrice noticed a tweet.

“Sunday night Doc Rivers had written ‘We are one’ in the locker room, and a reporter tweeted it after the team left,” explained Brice. “Our slogan for the year had been ‘It’s time,'” and Adidas had made jerseys that said ‘One team, one goal, it’s time,’ so it just clicked.”

HEILBrice worked quickly to get the new slogan out there with the site design and also an understated TV spot, which played off the phrase and aired during last night’s game between the Clippers and the Warriors.

“We are in an unusual place — we’ve done their advertising since 1999, and our relationship is that we are fans of the team and the players and our client relationship is with their organization,” explained Brice. “We aren’t associated with the ownership — so it was an unusual and painful thing when that came out, but we wanted to make sure that we were making the marketing from the fans’ perspective.”

The quick thinking and strong messaging has been paying off for the Clippers. Before swapping out the homepage and playing up the new slogan, the only statement by Clippers players was made by wearing their warmup shirts inside out to hide the team logo. That expression of solidarity against the ownership, however, was roundly criticized as being too timid. This new design and slogan, however, have struck a chord.

The Clippers’ tweet showcasing the slogan has gotten more than 4,000 retweets and more than 3,000 favorites. The #WeAreOne hashtag has been mentioned more than 5,650 times so far, according to data from Brandwatch, and the Clippers are enjoying a nice bump in Twitter followers. Since April 25, the Clippers have gained an 10,674 new followers; and just since April 29 when the team unveiled the new slogan, the team gained 4,669, according to data from Topsy.

“From a branding point of view I like it,” said James Cooper, head of creative at Betaworks. “It has what the Saatchi brothers say, ‘brutal simplicity.’ It’s not in the Clippers’ colors, but black and white. Obviously you can take that as a visual idea about race, but it’s also smart because it becomes a thought that’s bigger than the Clippers team.”

And indeed, other teams — like the Warriors, the Mavericks, the Pistons, the Nets to name only a few — are embracing the slogan and sharing it:

As the #Warriors prepare for tonight’s playoff game, we share in the spirit of this league-wide message. #WeAreOne pic.twitter.com/k07HbGS1r3

“It’s a great slogan and I’m glad they are doing it,” said branding expert Karen Post. “Whenever you can capture the spirit of something so big like this in a tight concise way that can be shared and retweeted is always good.”