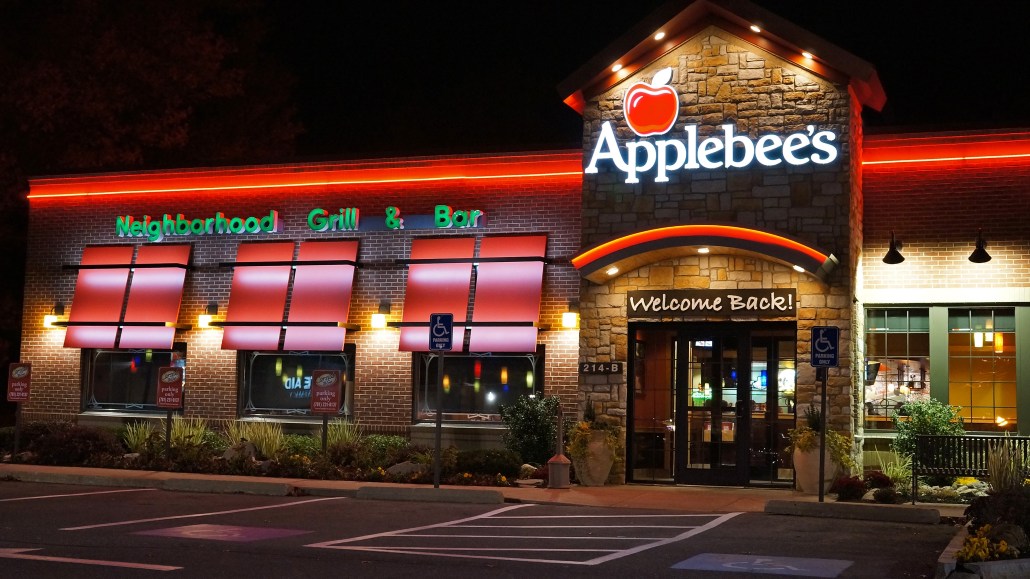 Chip Zdarsky is a Toronto-based journalist and comic book artist, but in his spare time, he has a special hobby: messing with brands on social media.

As Zdarsky explained, he and his friends would regularly troll brands on Twitter, but when it came to his local Applebee’s, its Facebook presence was so positive, he didn’t have the heart to go that same route.

“The Applebee’s account felt too … alone? I couldn’t be mean,” said Zdarsky.

Instead, since last April, Zdarsky started to build a relationship — or friendship even — with the Applebee’s Facebook, calling the whole experiment “Applebee’s & Me” on his Tumblr. 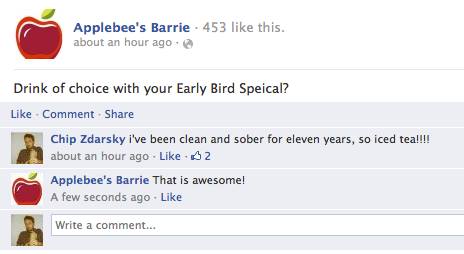 Zdarsky’s comically earnest interactions with the brand went viral thanks to a BuzzFeed post. Digiday caught up with Zdarsky via email to find out more about how this experiment in brand social media came about, whether or not brands can really be human on social, and why people voluntarily interact with cheesy brand posts in the first place. Some excerpts:

How did you first come across your local Applebee’s Facebook page?
One day my Facebook news feed showed me that both of my parents liked a photo of a hamburger on their page. I immediately popped in to make it a family affair, this adoration of a burger. But then I started scrolling through the page, and it was just post after post of photos and brand-promoting questions with almost no one responding. I just got sucked in.

Do you think it’s possible for brands to be human on social media?
Sure. Or at least appear to be. Companies can give their social media people a certain amount of leeway to be funny and interact a bit more freely with people. Most don’t just because these people are representing their company in a forum that relies on speed and intuition, and that can feel dangerous. Companies spend so much money and time on their brand’s message that to hand it off to, say, an intern and go “just wing it when you need to” is counter-intuitive to what a company’s usually all about. 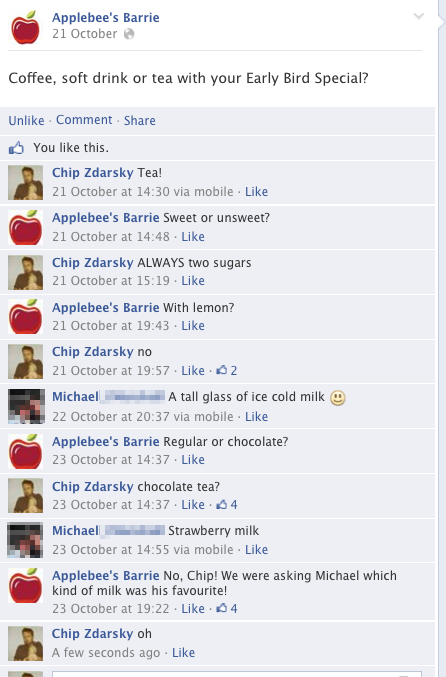 Do you think Applebee’s had any clue you were kind of messing with them?
I don’t know. I had trouble imagining them not clicking through to my profile at some point and seeing who I was, what I was about. But another part of me pictured that the person on the other end was an older restaurant manager, unused to Facebook but given a handbook on social media and trying their best to follow it to the letter. That person, in my mind, didn’t know I was messing.

What were some of your favorite interactions with Applebee’s?
They followed very strict rules. They always posed questions, always responded positively to the answers, and always tried to turn conversation back to Applebee’s. My goal was always to get them to break out of that, to seem a bit more human, so the ones where I got them to break out of that for a bit made me pretty happy. Like when I got them to suggest “Batman” as a Halloween costume. It sounds so dumb, but that made me laugh and laugh. And our politeness in every exchange was just strangely sweet. It felt very small-town Canadian. 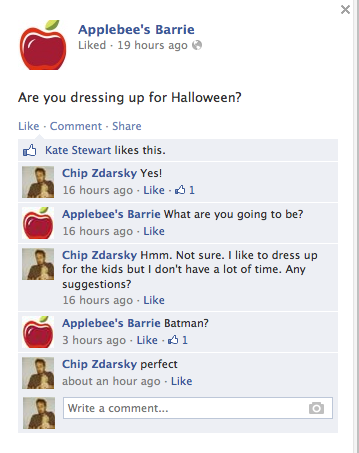 What do you make of brand social media tactics like asking for retweets or fill-in-the-blanks?
Hey, it works! You see it constantly and people respond. Like this example from another restaurant chain I was obsessed with: Swiss Chalet. What kind of person would genuinely sit down and try and come up with [a response]? Hundreds of people did. Maybe 10 percent of them were jokes, like mine. That’s weird.

Aside from social experiments like yours, why do you think people interact with brands’ cheesy posts on social? What kinds of people genuinely want to tell a fast-food chain about their favorite dessert on social media?
They’re kind of like faceless celebrities to people. I mean, have you ever been responded to by a Taco Bell account or a Doritos account? Did you, for a second, get a weird charge out of it? Probably, right? But that quickly fades once you shake your head and go, “Wait, this is some dude in an office, and it means nothing.” But I think the majority of people don’t stop and think about that and feel like they’re really affecting change or being recognized by an institution. Also, some people are hella lonely. Like … like me.