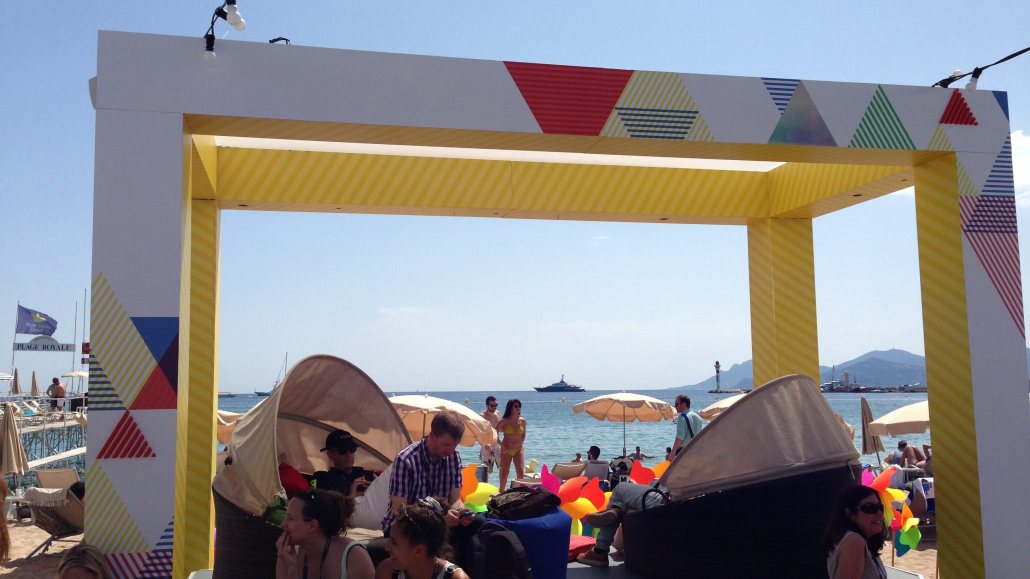 It’s hard to believe but Google was once held as the antithesis of Cannes. When it was “only” the world’s most powerful search engine, Google looked skeptically on such old-world advertising conventions as Cannes. Times have changed. Google’s now one of the biggest attractions. Its Creative Sandbox is a bustling, prime beachfront destination, with free massages, a beach, a bar making fruity drinks and a series of “lightning talks” to boot. The carnival atmosphere there — there were at least 70 people lined up to get in at one point yesterday — stood in contrast to the empty spaces nearby for rivals Microsoft and Yahoo, not to mention the empty cabanas for ad tech companies. Google even wised up to the power of its schwag. It required visitors to demo six Google technologies in order to get a prize, like a Google beach towel. It gave a seminar sure to warm the hearts of big-idea creatives, extolling the virtues of “moonshot” ideas. On Thursday Google is throwing a big party at its beachfront space — another way to win over ad types.

Google has made tremendous strides in getting the attention of the creative community, thanks to Google Creative Lab. One of the most important things this team has done, other than recruit top agency talent, is to fund innovative projects. Google’s pushed its concept of “art, copy and code” by working with top agencies in order to combine their traditional strengths in storytelling with (Google-owned) technology.

The approach is clearly working. You can see that by how new tech platforms like Twitter and Facebook are starting to emulate Google’s approach. (It helps that these companies typically have Google veterans.) Sure, Google might make the lion’s share of its money through boring, incredibly effective search ads, but if it’s going to crack the big budgets devoted to brand advertising, it better cozy up to the creative class.

Yahoo is clearly betting big on Tumblr. The social platform is just getting started in advertising, but it’s already gotten a tutorial on how to get to client’s attention. It has rented a helicopter to fly dozens down to St. Tropez for 30-minute meetings.

In addition to the helicopter rides, Tumblr now has the high-profile sponsorship of the Gutter Bar, a Cannes institution for late-night debauchery. Yahoo took over the bar, which is called 72 Croisette, last year in a first-ever sponsorship of the cafe. This year revellers drink beneath glowing Tumblr signs, and the platform was giving away calzones on Monday night. The sponsorship was apparently in the works before the Yahoo deal. One educated estimate on the cost put it at over $500,000 for the week.

Not everyone got the memo about how to guard against cringeworthy oversharing of the opulence that comes with Cannes. Take for instance Carrot Creative CEO Mike Germano’s helicopter selfie.

Speaking of that memo, there were violators aplenty on the Carlton Terrace last night.