What it’s like to be a Vice ad agency 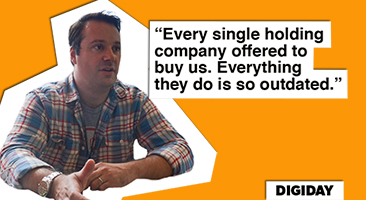 This is “View from the Top,” the latest in a Digiday series featuring creative leaders talking about their career paths and leadership perspectives. Read previous interviews here.

Carrot Creative is an agency founded on breaking the rules. Its genesis dates back to CEO Mike Germano’s teenage years, when he and Carrot co-founder Chris Petescia were nearly expelled from high school for starting a gossip blog. “It was like a mix of The Onion and The Huffington Post,” Germano said. Their Web development skills were put to more constructive ends in Germano’s senior year of college when Germano decided to start his own company in lieu of completing a school-mandated internship.

In Germano’s case, it paid to be a rule-breaker; his agency was acquired by Vice Media in December 2013 for $20 million. Now, for the first time, Germano has a boss of his own.

Germano gave Digiday a tour of his offices on Tuesday morning and spoke at length about that transition, why he refused to sell Carrot to the agency holding companies that wanted to acquire it and why it’s important to take care of oneself when running a business. Excerpts:

Has it been humbling to finally have a boss?
Very humbling. It has absolutely made me a better boss at Carrot. My bosses are Shane [Smith, Vice CEO] and Vice president Andrew Creighton, and those are pretty larger-than-life characters. I can see the things I would do differently or would want them to do differently. I’m learning why I drive some of my employees crazy.

What piece of advice do you wish you have listened to?
Since we’re successful now, I’m happy I didn’t listen to everybody. But I will say when you’re young and stupid, people say, “Don’t forget to take time for yourself.” I would have done that a little bit more. Actually going to the gym or taking the personal time. When you own your business, you’re waking up at 5 a.m. to answer emails out of fear. There’s always an excuse to put off your personal life.

Did anything bad come of it?
I put off dental checkups. I knew I needed a root canal, but I put the money in the company. And then my tooth broke in the middle of a meeting.

Ouch.
We couldn’t afford health care for the first three years. It was extremely scary. My tooth broke in the middle of a pitch, and I filled it with paper towels from the bathroom.

You ran for Hamden city council when you were still a student in Connecticut. How did that experience influence how you run a company?
When you’re campaigning door-to-door, you’re asking people to trust you with decisions about their future. I don’t take lightly my employees and always thought, “These people are trusting me with their future” and I owe them a tremendous amount of care and respect.

So many agency executives complain about millennial employees. Yet you embrace them.
We try to not deal with the traditional hierarchy. If someone younger than you is better than you, they’re the ones that should take on that responsibility. The reason other generations hate the way millennials are in the workplace is because they had to put in 10 years before they had an opportunity. And those rules don’t encourage you to be the best you can be.

Has it been hard to relinquish control as the agency has grown?
I don’t deal with it well. I’ve learned that your main job as a boss is to find people to do your job.

Why’d you sell to Vice after turning down all the agency holding companies?
Every single holding company offered to buy us. Everything they do is so outdated. I just know our company would fail in that environment. They also approached us like we were kids. They sat there and said, “Hey, boy, good job. You’re a little ahead of the game right now, but we’ll get there. So we don’t really need you, but it’s time to sell your company and join us.”

What was Vice’s attitude?
As much as people say Vice is aggressive punks, they were the most modest of the companies that tried to acquire us. They said, “We gotta improve, and you can help us.” And they respected our brand and agency.

What advice would you give to someone starting their own agency?
One, offer the most unique service out there. You’ll get more work than with a broad service agency. Two, you need to be prepared to not pay yourself for a long time. Three, having business partners and employees who believe in you is the most important thing.