Cannes Briefing: ‘There has been a cleanup’: Ad tech’s presence diminishes at Cannes 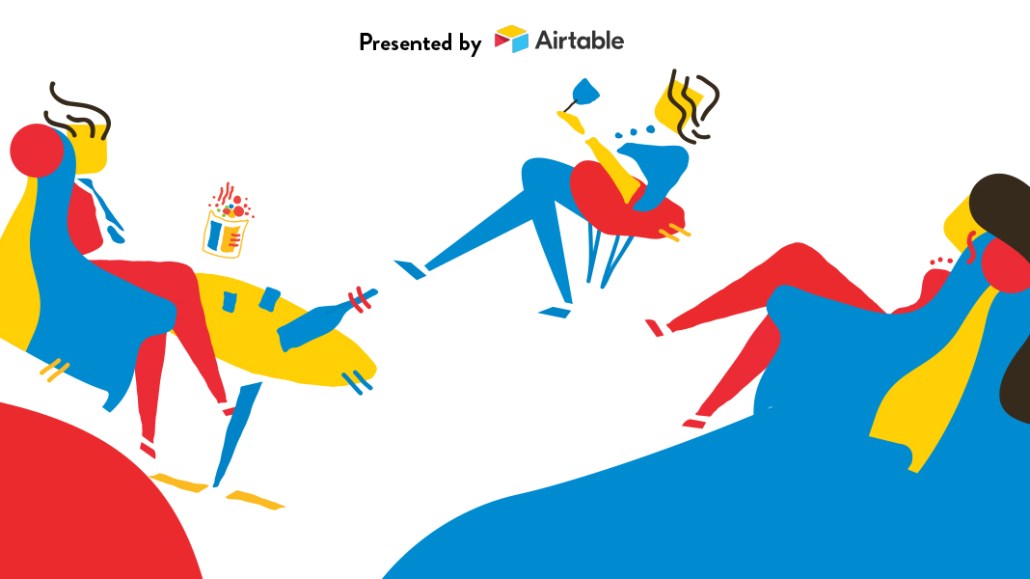 There’s a lot of talk about the much-needed ad tech consolidation, and nowhere is that more visible than at the Cannes Lions festival.

The reasons vary for the more low-key independent ad tech vendor presence: The once-brimming well of ad tech venture capitalist funding has shrunk. Added to that, publishers have taken a cleaver to their digital ad supply chains in order to regain control over their data, curb fraud and unmask hidden fees. That has helped rid the market of the kind of low-value ad tech vendors, fondly referred to in the industry as “bottom feeders,” that even fellow ad tech vendors are pleased to see disappear.

More recently, the arrival of the General Data Protection Regulation has led some U.S. vendors like Verve and Drawbridge to pull out of Europe entirely to avoid the cost of getting their businesses GDPR-compliant and avoid any risks should they fail to do so. Most ad tech executives are pretty candid in their predictions that other noncompliant U.S. vendors will also be forced to leave Europe in the coming months.

GDPR will dominate a lot of conversations at Cannes this week. And where better to have these difficult conversations than on a yacht overlooking the French Riviera, with free-flowing rosé on hand to soften some of the gnarlier questions. Publishers that have felt at a disadvantage as a direct result of Google’s last-minute GDPR policy changes plan to continue their conversations with the tech giant at Cannes, behind closed doors, according to sources. Meanwhile, advertisers will also ask difficult GDPR-related questions of vendors about how they can ensure they’re passing consent on verified audiences and inventory.

“This [GDPR compliance] will be a marathon and a theme far into the future,” said Ben Barokas, founder and CEO of ad tech vendor Sourcepoint. “It’s going to be an iterative process, and there will be more lessons to be learned.”

Last year, conversations at Cannes Lions centered around how to build better transparency into the digital ad supply chain, whether it’s around hidden fees, reducing fraud or simply having better visibility of who is providing value and who isn’t in the chain. “That market rationalization that emerged last year has meant that [this year], hype is lower, and people are doing cleaner business that’s more in favor of publishers,” said Romain Job, chief product officer at French ad tech vendor Smart, which has a large yacht on the harbor complete with a hot tub on the front deck.

“There has been a cleanup of vendors,” added David Pironon, programmatic director at Smart.

The reassertion of publisher control isn’t bad news for all vendors. For those that have cultivated strong relationships with publishers, Cannes remains a critical place to invest marketing budget, according to ad tech executives.

While September’s ad tech conference Dmexco in Cologne, Germany, is regarded as the place business deals are sealed, Cannes remains a vital top of the sales funnel where vendors can meet with publishers and chief marketing officers to discuss long-term objectives, and of course, posture for acquisitions. Ad tech vendors are always on the prowl to make good exits, and Cannes remains a criticial place for them to display their businesses to potential buyers. “Dmexco is the conversion, but Cannes is the prospecting, said Ciaran O’Kane, CEO of ExchangeWire. “Where the rosé goes in, conversations about deals on how to work together come out.”

After Oracle’s acquisition of ad tech firm Grapeshot, other vendors will be looking excitedly for a good martech merger-acquisition fit. There are notably more chief marketing officers at Cannes compared to previous years, and both ad tech and martech vendors will all be fighting to get in front of them. “They’re all chasing the same people,” added O’Kane. “The battle is going on for the hearts and minds of the marketers who want to link up all their tech. That’s going to have a big effect on the ad tech space.”

The trend of publishers and advertisers tightening up their digital ad supply chains, driven by a need for better control and to avoid GDPR risk, is causing smaller to medium-sized ad tech vendors to bow out. But the same trend is strengthening the power of those that remain, whether via acquisition or independently.

“The more established companies are getting much more excited. There is a consolidation of power at the top,” added Barokas, referring to vendors that have had big exits such as SpotX, Moat, Teads and Grapeshot. “They’re thriving. Anyone that has deep connections with publishers and advertisers will be thriving.” — Jessica Davies.

Overheard on the Croisette (and beyond)
“The biggest problem in the industry right now is people are still just focused on reach and numbers.” — Ad exec

“We had to hire a fire marshal and a million security guards. I mean, we hired 200 people just for a 600-person party. I’m broke.” — Publisher PR

“Nobody wants to invest in media. Nobody. The money is over. The born rate these companies have, the math doesn’t work.” — Publishing exec

Who’s where?
Here’s your guide to who has taken over the Cannes jetty and beaches this year. 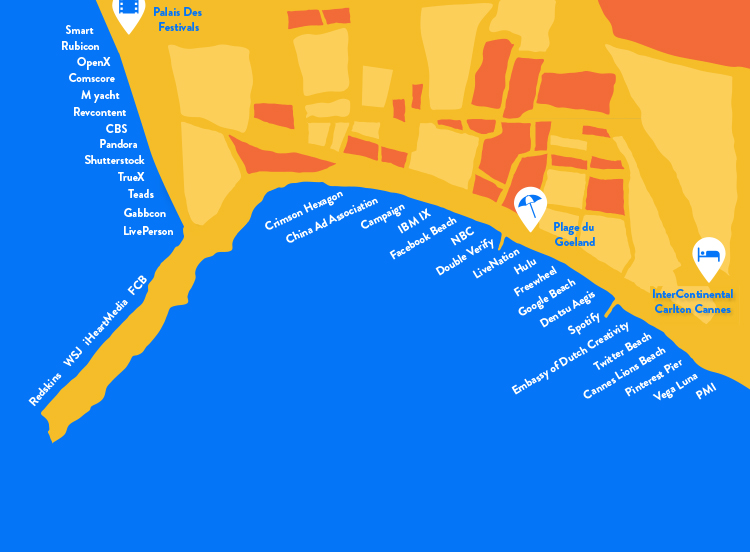 The Digiday Podcast Cannes Edition hosts Jesse Angelo
Jesse Angelo, CEO and publisher of the New York Post, visited Digiday Podcast Cannes headquarters — an Airbnb — to talk about Facebook as a threat to national security, the pivot to reality for venture capital-backed digital publishers and the prospect of subscription at the Post. Here’s what he had to say about the Post adopting a membership model as opposed to the meter in place at traditional rival the New York Daily News:

“As the Voxes and the BuzzFeeds have discovered, there’s a top to what you can do in digital advertising. When we think of membership, it’s not a digital subscription that restricts content. For us, we know we have superfans, people who love our product. People who use our phone app come back four to five times a day for 20 minutes. These people love us. What can we give them that’s more?”

Read more excerpts and listen to the episode.

Why are you here?
We’re here bigger than in previous years. Creative consultancies are coming together to amplify the message we have.

What’s the message?
The message is, so we’re here to optimize for the brands; we’re helping brands own capability sets like in-housing. But we’re helping the ecosystem at large. We’re helping agencies work more effectively with brands. We’re not displacing agencies. Helping the different technology providers all engage better than the brands as well.

Is media buying in the cards for you?
We’re not playing in that conflicted space. We want to make sure we’re free to optimize for the brands. Our incentives are directly aligned with the CMOs. We have a great presence. We can listen and work in marketing organizations. If they want to talk about advertising, we can go down that path. If they want to talk about analytics, we can go there. It’s what they need, and we can pivot a number of ways.

What are they concerned with?
From an opportunity perspective, brands and CMOs finally understand that they’re the owner of data and owner of the customer experience. They need to take classic CRM data and marry it to audience data. In some cases, that means I need to own my audience data and combine it with the rest of the data, and it needs to be GDPR-compliant. It goes back in some cases to in-housing. The hardest part is taking ownership of the data. But the key is, clients still need their agency partners. The relationship might change, but they need them. — Shareen Pathak

Curiosity on the Croisette
The plush beachfront spots are normally taken up by the giant tech platforms like Google, Facebook and Spotify. One prime beach space this year — right near the Hotel Martinez — is occupied by Philip Morris. Yes, that Philip Morris. Billed as “Philip Morris Science,” it’s an effort to promote the tobacco giant’s nontobacco products — and position itself as a mainstream company. The splashy digs come a few months after Philip Morris hired ad and public relations agency veteran Marian Salzman to head up communications. — Brian Morrissey

Cannes slowdown
Many expected Cannes to be a little quieter this year, as advertising and media companies face harsh realities about the future of their businesses. One day into the festival, attendees say the belt-tightening is evident. Yes, the lavish beach parties, dinners and rosé are flowing freely along the Croisette, but perhaps not to the extent they have in recent years. Media buyers report seeing fewer party invites than they’re used to, and those invites are increasingly for smaller, more intimate events than large-scale parties. That might have something to do with Publicis Groupe’s drastic reduction of its attendance this year, of course. One agency executive also noted how the week seemed “front-loaded,” with multiple companies hosting major events on Monday and Tuesday, with relatively little planned for the end of the week. While it’s not unusual for execs to leave the festival a day or two early, one ad tech exec said he expects things to quiet down earlier this year. “Wednesday’s the new Thursday,” he said. — Jack Marshall

Blockchain watch
If last year was about big data, this year is about blockchain. Never mind that nobody’s quite clear on how exactly the distributed ledger technology will be used in marketing and advertising, and most applications still abound in theoretical suppositions. One agency exec told me that his bosses expect him to return to New York with real ideas about how to integrate blockchain into their offerings. We’ll keep you updated on how far blockchain hysteria will go this week. — Shareen Pathak

Coming up
10 a.m.: Gabbcon is hosting a session on blockchain in programmatic that promises to go “beyond the hype.” Tall order. (Palais II)
11 a.m.: Digiday and Teads are hosting a panel on the Teads yacht on “Video everywhere.”
3 p.m.: The Digiday Podcast is live with Complex Networks CEO Rich Antoniello. (Dentsu Aegis Beach House)
3:15 p.m.: New York Times CEO Mark Thompson will talk about “truth in the age of deception.” Watch for some potshots at Facebook. (Dentsu Aegis Beach House)
3:15 p.m.: Publicis CEO Arthur Sadoun and chief strategy officer Carla Serrano take the Cannes stage to discuss Marcel, the artificial intelligence platform that took up so many resources that Publicis decided last year to sit out of Cannes to help fund the project. (That hasn’t quite gone according to the plan.)
4 p.m.: Henry Davis, president of Glossier, talks about how Gossier built a newcomer beauty brand. (Palais)
4:30 p.m.: The Association of National Advertisers and Deloitte Digital are hosting a closed-door CMO roundtable followed by an open happy hour at the Dior Suite.