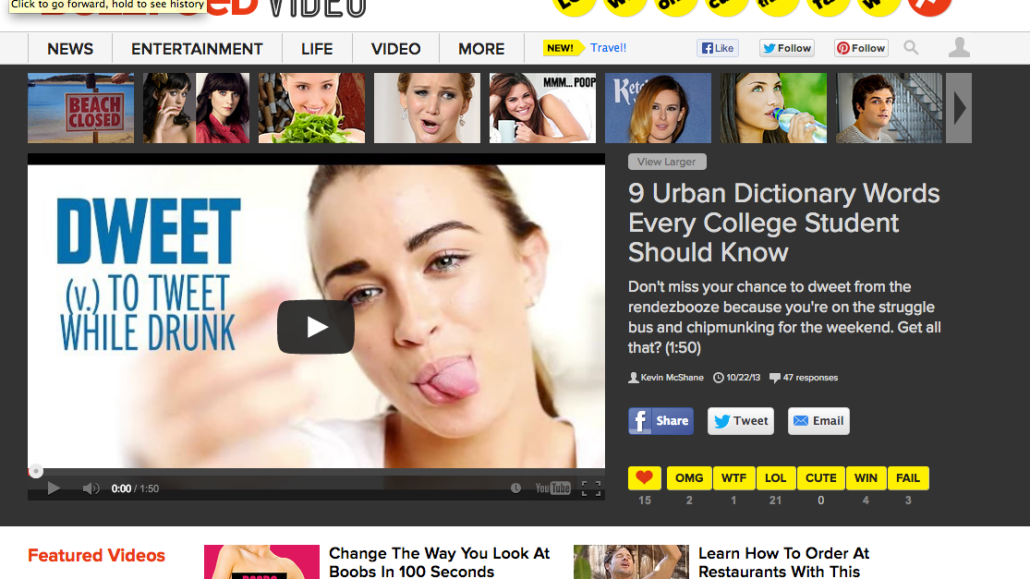 Want to make your video go “viral?” Too bad, says Ze Frank, evp of BuzzFeed Video. The reality is that making something that touches a nerve and gets shared virally is more or less impossible to simply will into being. The good news? There are still smart ways to go about distributing your stuff.

Frank, who created the popular and rather wonderful web series called “the show,” gave a bunch of useful tips and hacks for figuring out how to promote video a recent BuzzFeed webinar, “1,800 Seconds That Explain How BuzzFeed Does Video for the Social Age.”

A few key tips for sharing video – be it branded content or editorial – from Frank’s presentation:

Listen to your viewers
What people write about the video when they share it on Facebook and Twitter are what’s truly important, said Frank, not what’s in the video itself. “Looking at those share statements give you insight as to why people have affinity for that content,” Frank said. Often people choose to share things they identify with (Identity, in the slide below), or things they know someone else will appreciate or find funny (Gift/Emotional), or that they can humblebrag about (Informational). There’s apparently more to life than cat videos. Based on why someone is sharing a certain video, Frank’s team can then frame and deliver content appropriately. 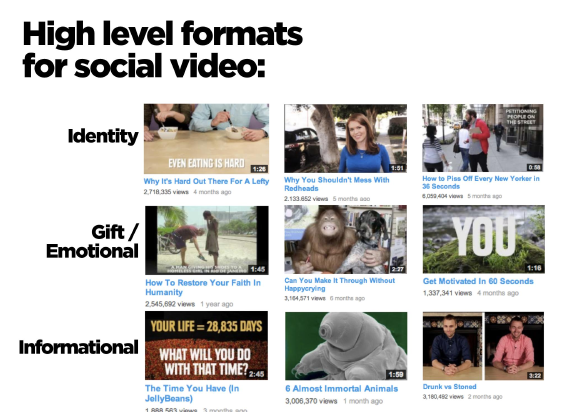 Get rid of the story arcs
Traditional storytelling is going to get a little compromised if you only have, say, six-seconds to do it in. Often, there’s no clear beginning, middle, or end. Sometimes, it’s just end, end, end, like this video featuring the “the best pumpkin carving on Earth.”

“Our approach,” Frank explained, “is that we try and figure out what are some formats that can test the assumptions about the role of video and what and how it communicates to viewers.”

Make sure your headlines and thumbnails don’t suck
“Social isn’t about ‘social content’,” Frank said. “It’s about understanding the entire ecosystem”. Content needs to be framed (headlines, thumbnails, etc.) for the correct network (Facebook, Youtube, Twitter). “The network is an environment,” he added. “You’re releasing your content in an environment. The right environment has just as much potential to spread content as much anything else.”

Don’t count on your core audience
Only 10 percent of BuzzFeed video users come from their subscribers. The rest come from somewhere else. “The interesting thing about sharing based business is that it reverses the way you think about programming,” said Frank. “Most programming from a video standpoint thinks about the audience that you’ve already captured – and then you program against the people you’ve already captured, which is what major television studios do.” Sharing-based media, however, looks to expand beyond the known audience.