Brands remind us on Twitter that they will #NeverForget 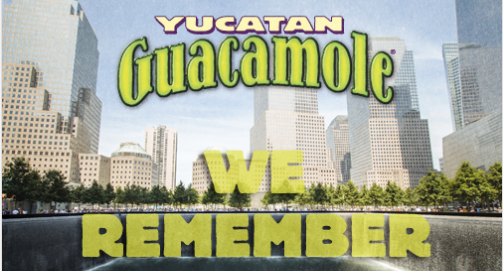 There are many reasons a brand might want to chime in on a national or cultural event on Twitter. They want to be part of the conversation; they want to be seen as relevant or with it. Ultimately, they want to sell their product.

Today brands — from White Castle to Walmart — want to “commemorate” 9/11, to let us all know that they will #NeverForget. For that, let’s be grateful. Because how else would we have remembered an unprecedented attack on American soil that took thousands of lives and still reverberates in the headlines daily, 13 years later?

Last year we asked if brands should even be tweeting on days like today. Apparently they know what’s best. So, thanks, brands, for reminding us of what really matters on this anniversary. And hey Applebee’s, save us some potato skins. 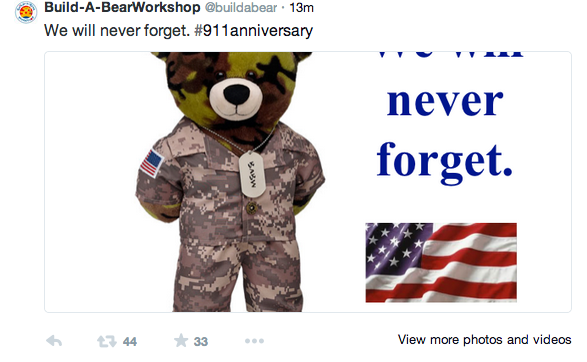 This might be 2014’s worst brand 9/11 tweet. But then, the day’s not over yet. No wonder it was removed almost immediately. Too bad, though, that the Internet #NeverForgets.

Tied To the South 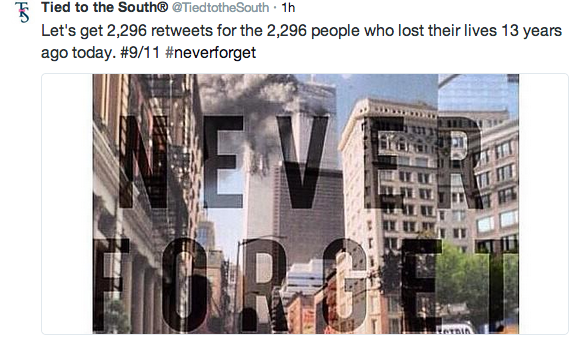 This one comes a close second, and was obviously removed too.

Wow. This tweet was also removed. Looks like someone made these Bikram enthusiasts sweat a little too much.

Rembering those who lost their lives on September 11, 2011. 40% OFF END OF SUMMER CLEARANCE… https://t.co/aAF3ENwtBr

Ok, we might be able to get behind the sentiment here, guys. Nice one.

#Remember911 today and everyday. A special thanks to our armed forces for protecting this beautiful country. pic.twitter.com/behgOcMtmN

Ooops. Looks like they deleted the tweet — and the image that went with it. Fortunately we have a screengrab:

Hmmm. Is that a memorial reflecting pool … or a giant guacamole bowl? Can’t tell.

This makes us feel as gross as we do after scarfing a six pack of sliders.

Today is 13th anniversary of 9/11. We remember those lost, & honor those still fighting for freedom. #911NeverForgetpic.twitter.com/W0yFU73L7V — Official Fleshlight (@Fleshlight) September 11, 2014

Fleshlight, for the record, makes fake vaginas. Thanks, Fleshlight.

Other companies, like Barney’s, the New England Patriots and Urban Outfitters too joined the fray.

The following, however, were not quite as cringe-worthy:

Today we honor the memory of those who lost their lives on September 11. pic.twitter.com/OW2FZt8O8l — Dunkin’ Donuts (@DunkinDonuts) September 11, 2014

Some lazy real-time marketing from the fast-food chain, but at least its message is hard to argue with.

13 years later, & we will #neverforget. pic.twitter.com/mG0rFzV0Yi

There was one brand, though, that really got it right. Everyone else take note: If you’re trying to sell us something, this probably how you should handle 9/11.

In observance of 9/11, this handle will be silent tomorrow. We will resume sharing on September 12.