Brands celebrate the Fourth of July with fireworks and clichés 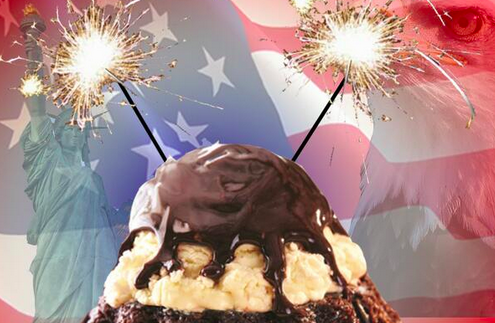 The need to be “real time” means brands have to mark every occasion, large and small. America’s birthday is no exception.

Your typical brand social media manager wants nothing more than to get out of the office for the long weekend. Let’s say most of these well wishes for America won’t win many creative prizes. To the tweets!

Who knew patriotism and pyrotechnics could go so well together? Have a blast this 4th of July! pic.twitter.com/OyAzQO8XPb

Happy 4th of July! Thank you to all of those who serve our country. #July4th pic.twitter.com/0pgQCxPOJo

And then there were the American flags.

Ah, cupcakes, those are American.

Ring in the Fourth of July with our recipe for Star-Spangled Cupcakes: https://t.co/WwZV13gwht pic.twitter.com/QpT5uifhmd

The Molten Chocolate Cake is uniquely American — and 1,270 calories and 62 grams of total fat

Happy Fourth of July, everyone! Here’s a reminder of some of the things that make America awesome… pic.twitter.com/x9yAwcle5a

Doughnuts are very American — the stop-motion is a nice touch.

Come to think of it, so is bacon.

And hot dogs are definitely American, as is acting a little weird. Kudos, Sonic.

Not sure what's going on over at @sonicdrivein, but I think it has something to do with hot dogs. I can dig it. pic.twitter.com/OdO6FKkCip

But nothing is more American than a tasteful product placement.

Lufthansa reached across the pond with some Germanic well-wishes.

A very happy Independence Day to you and yours :) Enjoy the fireworks! pic.twitter.com/WTJ6AYSwj4

While Newcastle, to its credit, continued to troll America on its birthday.

You don’t have to be British to drink British! Happy Independence Eve, America! #IndependenceEve pic.twitter.com/jSDkZBdhPf