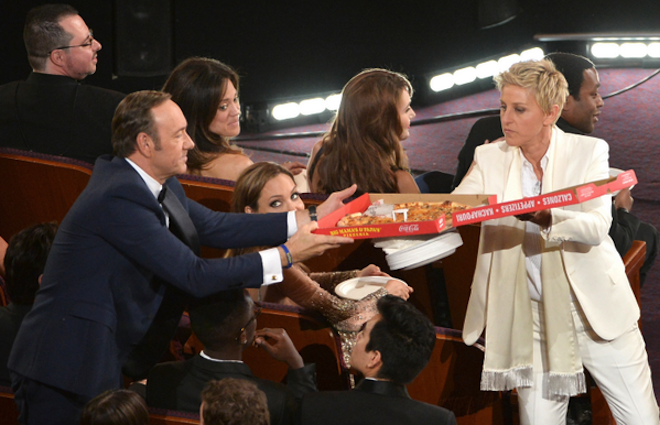 Thanks to chance, Ellen DeGeneres and the Oscars, a relatively small Los Angeles County pizza franchise has gotten a sliver of the global spotlight. If any single brand was the big winner at the Oscars two weeks ago, it was Big Mama’s and Papa’s Pizza.

As movie fans everywhere saw, Oscars host Ellen DeGeneres decided to order pizza during the awards show for front-row A-listers like Brangelina, Julia Roberts, Jared Leto and Kevin Spacey. The pizza happened to be from Big Mama’s and Papa’s, and since then, the humble pizza franchise — started almost 20 years ago by brothers Allen and Aro Agakhanian — has been enjoying a ton free press and buzz.

So too has  Edgar Martirosyan, the franchise owner, who also delivered the pizza on air, who was invited to appear on The Ellen Show. Last Wednesday, DeGeneres went to a Big Mama’s and Papa’s location on Hollywood Blvd. to film live and give away prizes. And as the chain’s owner Aro Agakhanian told The Wrap, he estimates sales increased up to 500 percent following the Oscars.

These people are about to be on my show. 1’s gonna win serious cash. There’s still time. It could be you. pic.twitter.com/yLCNFhz6mm

In fact, the whole chain has benefited. Big Mama’s and Papa’s, which has 20 stores in all, has also gotten a big influx in social media followers. According to Wildfire, the pizzeria has gone from 11,774 likes on Facebook on March 2 (the day of the Oscars) to 23,176 as of March 14. On Twitter, the pizza brand has gone from 3,975 followers to 7,278 for the same date range.

Digiday spoke with Wayne Gragorian, an executive at Big Mama’s and Papa’s corporate office, to talk about the franchise’s newfound fame, how the company plans to handle the attention and whether or not taking advantage of social media and digital will be a greater priority now. Excerpts:

Can you tell me about the whole Oscars thing — did you have any idea it was going to happen?
We had no idea, zero idea — that was quite a surprise. We have 20 stores in LA County, and one of ours stores happened to be in Burbank, which is surrounded by studios. Because of that, studios order from us and the Ellen DeGeneres show is taped in Burbank, so we deliver to them, so they are just one of our customers. I’m sure they order from other pizzerias too, but the day of the Oscars, the producer decided to do something unusual. They randomly picked the one pizzeria close to the Dolby Theater in Hollywood, and one of our branches is walking distance from there. They chose us, which was great; we are very grateful for that. They ordered 20 pizzas, and the driver happened to be the franchise owner, Edgar, and he just took the pizzas and delivered them to the theater from the back door, because normally it’s for the technicians and writers — he had no idea what was about to happen. Then Ellen approached him, and he just figured they were going to pay him, but they told him to walk with them, and next thing, he knew he was on the stage — but he did a pretty good job though. We consider ourselves extremely lucky. It could have been anybody, but it came to us.

What has the aftermath of all of this exposure been like?
We saw a boost in sales, and we were bombarded the first few days — it was an overwhelming amount of emails and telephone calls about interviews from TV stations and radio shows from all over the world. We did get a lot of inquirers for franchisee opportunities. We are a small company, but after this event, we had a lot of inquiries from all over the world — from Europe, Asia, Australia, Canada, you name it, every corner of the world. They want to find out about our pizza and what we do. And just recently, Ellen did some event at one location and was doing some lottery giveaway and fun things.

Has all of this attention, especially online, made you want to focus more on social media and digital to keep the momentum going?
We haven’t really had any drastic changes with our marketing strategy — it’s not like we were fixing anything that was broken. Right now we are really busy responding to the overwhelming amount of emails. As far as the operation is concerned, we are continuing as we had been. We have a company that handles our social and our Web design. For us, it’s overwhelming to handle all of that ourselves. It’s all been so sudden. We are a small-scale operation — we aren’t like a Domino’s where there’s a corporate office in every state. Our office is four full time and some part time. So there’s no way we could expand our team that rapidly and bring some of that digital in-house. In the future, most likely, we will consider bringing it in-house, but it’s too early though. But we are very much active on digital — especially with email marketing. It’s not about inserting coupons in the newspaper anymore like it used to be!